A young Hawke’s Bay stock agent and the son of well-known Hawke’s Bay rugby and cricket commentator Ian Smith are among the owners of New Zealand’s latest Group 1 winner, the classy two-year-old On The Bubbles.

Sam Wright, who works for the Hastings branch of PGG Wrightson, is part of six family members and friends who own a 10 per cent share in the boom youngster. Hawke’s Bay-born Jarrod Smith, a former All White soccer player who now lives in Auckland, also owns a five per cent share.

They are part of the 20 members that make up the Te Akau Splash Of Dom Racing Partnership that race the gelding from the Matamata stable of Jamie Richards.

Although Sam Wright and Jarrod Smith have become acquainted over a few beers at Turks Bar in Havelock North, neither knew the other one was involved in the horse until he started winning.

And winning has become like second nature to On The Bubbles who chalked up his fourth victory from only six starts with a dominant performance in last Saturday’s Group 1 $225,000 Courtesy Ford Manawatu Sires’ Produce Stakes (1400m) at Awapuni.

Bought for $90,000 by Te Akau principal David Ellis at last year’s Karaka yearling sales, On The Bubbles has also included the $1million Karaka Million Two-year-old (1200m) at Ellerslie in January among his triumphs and his two defeats have both been in Group races. He has now amassed $743,550 in prizemoney—more than eight times his purchase price.

For both Wright and Smith it is their first venture into racehorse ownership and they are now living the dream.

Sam Wright worked for a time as a livestock agent for Te Akau and thus struck up a relationship with David Ellis. He has had a life-long interest in racing and he and his father Dave, a Feilding-based stock agent, decided to take up a share in the Australian-bred son of Brazen Beau. Both were on course at Awapuni last Saturday to cheer the gelding home.

“It was a huge thrill,” Wright said this week. We’ve been very lucky to be involved in such a good one.

“It will probably get me hooked on racing ownership forever and I like the punting side of things too.”

Jarrod Smith has also been a keen punter for many years but said this week there is nothing like the thrill of owning a winner, especially a horse as good as On The Bubbles.

He and his fiancée Rebekha got involved through a friend who is related to Karen Fenton-Ellis, wife of David Ellis.

“We wanted to buy a horse to contest the Magic Millions and for this horse (On The Bubbles) to actually go on and win that race was a dream come true,” Smith said.

“And by the way he won last Saturday he should go on to even better things as a three-year-old next season.”

Jarrod Smith played 15 games for the New Zealand All Whites soccer team during the late 2000s and also played major league soccer in Canada and the United States. He has been living in Auckland for the past six years and has been on course to see On The Bubbles contest four of his six starts.

Trainer Jamie Richards was full of praise for On The Bubbles after his latest success and says the gelding’s potential is still relatively untapped.

“He loves being a racehorse, and there’s no other way to put it,” he said.

“I’m really proud of him. He’s been to most of the big dances this year and just keeps improving.”

Ridden by his regular jockey Johnathan Parkes, On The Bubbles charged forward from his wide gate and dominated the race from the front.

He changed gears at the top of the straight and exploded clear, romping home by 3 lengths in a powerhouse performance.

It was yet another cool, calm and collected ride from Parkes, who brought up his second Group 1 success for the season.

The elite level success came hard on the back of his win aboard Ocean Billy in last month’s Group 1 Auckland Cup (3200m), with the Central Districts-based Parkes delighted to repay the faith placed in him by the northern trainers.

“Hopefully, I’m established enough now to be thought of for taking rides in the bigger races,” Parkes said.

“I’ve built up a good rapport with Jamie Richards and David Ellis and they have been very good to me in offering me rides on horses like On The Bubbles.

“He has been a very good horse to me this season with his win on Saturday and in the Karaka Million.

“He is tough and very professional which makes my job so much easier.”

After a successful apprenticeship, Parkes established his presence on the national scene when he rode 118 winners in the 2013-14 season and backed that up with another 102 the following year. Big race success began to flow and he rode 11 stakes winners in both the 2016-17 and 2017-18 seasons.

However, after completing another century of winners in 2018-19, the constant toll of wasting to maintain a competitive riding weight began to affect both his physical and mental health and saw him take a conscious step back by reducing his riding commitments.

“I haven’t ridden as many winners in the last two years as I had previously, but I pick my battles when to ride light now,” he said.

Parkes is now just over 50 away from reaching the magical 1000 wins as a jockey, a feat he hopes to achieve sometime next season.

On The Bubbles will now be given a winter break before returning for a spring campaign aimed at the Group 1 New Zealand 2000 Guineas (1600m) at Riccarton in November.

In the meantime his two-year-old heroics have given his connections plenty to celebrate. 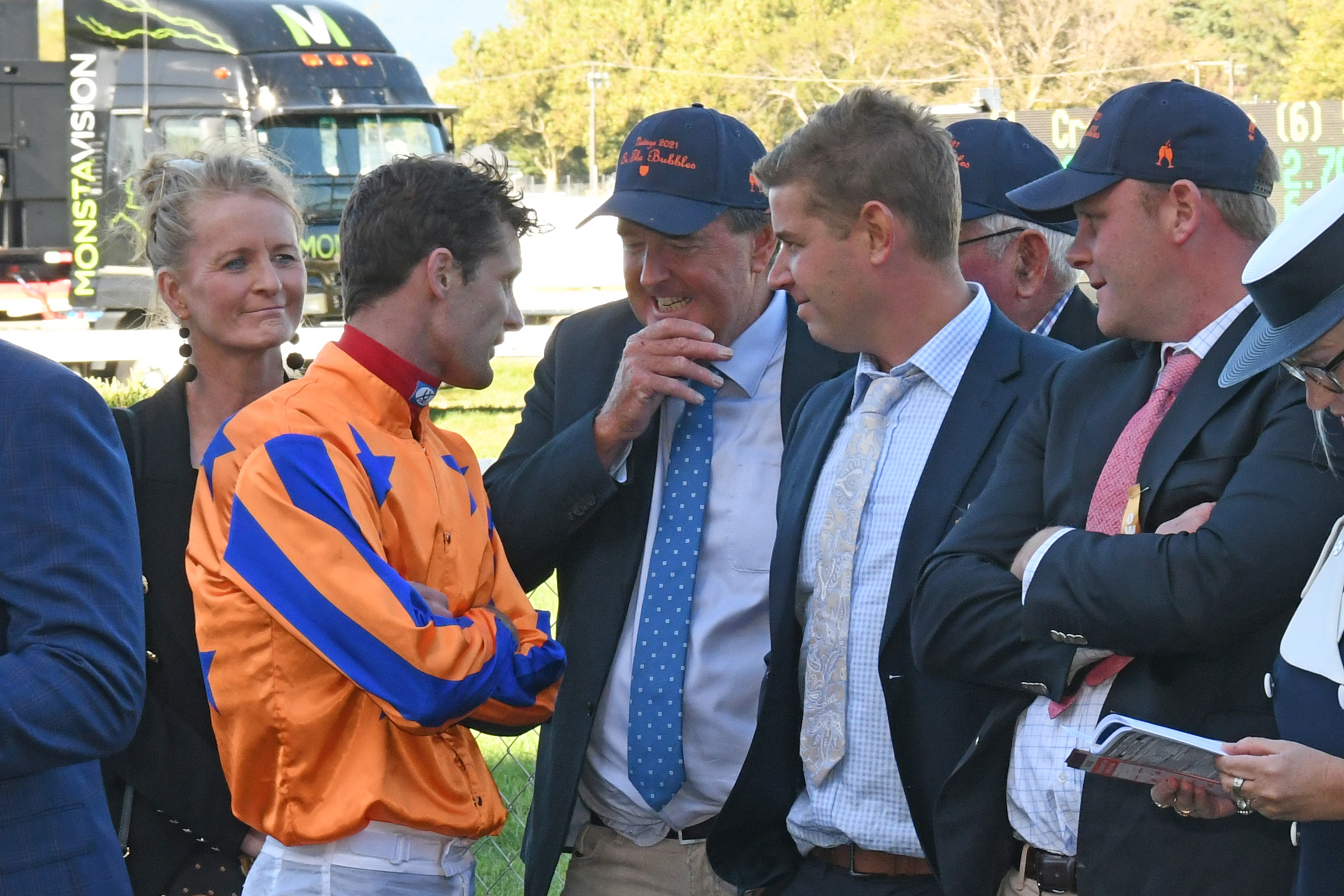 The Listed $75,000 Power Farming Hawke’s Bay Cup will be the feature race at next Saturday’s Hastings race meeting.

The time-honoured 2200m event wasn’t run last year due to New Zealand racing shutting down for more than four months but is expected to attract a strong field this year.

Another feature race on the programme will be the $50,000 Vintech Pacific Poverty Bay Cup, a Rating 74 event run over 2500m.

At this stage there are eight races programmed with the first timed for 12.40pm and the last at 4.50pm.

There will be a $10 general admission charge and a $30 charge for admission to the Members Stand.

Covid-19 QR Code Boards can be located at reception in the club’s main office and at entry points and patrons are encouraged to use the NZ Covid Tracer mobile phone app to register their attendance.

The Cambridge training partnership of Murray Baker and Andrew Forsman will get two chances at Group 1 glory at today’s opening day of The Championships on the Randwick track in Sydney.

The Frontman will contest the $A2million Australian Derby (2400m), while Aegon will be looking to regain winning form in the $A3million Doncaster Mile (1600m).

Undefeated in four New Zealand starts, Aegon was an impressive winner of the Group 2 Hobartville Stakes (1400m) in his Australian debut. However his winning run was brought to an end last start when he finished sixth in the Group 1 Randwick Guineas (1600m).

Forsman said the lightly-framed son of Sacred Falls didn’t cope with a quick two-week back up between runs but he and Baker have been pleased with the way the horse has progressed after a short freshen up, highlighted by his win in a 1175m trial at Warwick Farm last week and an exceptional trackwork gallop this week.

Aegon has drawn barrier seven in the Doncaster and will carry 53kg, with Kerrin McEvoy to ride.

Forsman is hoping The Frontman can add to the stable’s strong record in the Australian Derby---with the training duo having won the classic with Mongolian Khan (2015) and Quick Thinker (2020), while Baker won the Derby with Nom du Jeu (2008) and It’s a Dundeel (2013) prior to the formation of the training partnership.

The Frontman, a full-brother to the Group 1 winner Bonneval, will back-up this weekend after finishing sixth in the Group 2 Tulloch Stakes (2000m) at Rosehill last Saturday. He has drawn eight and will be ridden by Hugh Bowman.

He is one of three New Zealand-trained horses lining up in today’s Randwick feature, the others being the New Zealand Derby winner Rocket Spade and Milford.

Rocket Spade, prepared by Lance O’Sullivan and Andrew Scott, is coming off a last start win over 1600m at Tauranga a fortnight ago. He has drawn barrier two with Kerrin McEvoy to ride. The Stephen Marsh-trained Milford, who was a last start eighth in the Rosehill Guineas (2000m), has drawn barrier seven and will have the services of top Australian jockey Damien Oliver.

Two other New Zealand-trained horses, Concert Hall and Quick Thinker, will also be in action at today’s Randwick meeting when they contest the Group 2 $A300,000 Chairman’s Quality (2600m).