The Hastings training partnership of Guy Lowry and Grant Cullen are planning a three-pronged attack on the Group 3 $80,000 Cambridge Breeders’ Stakes at Te Rapa on April 30.

The duo have had the 1200m feature in mind for one of their stable stars, Wewillrock, for some time and he is now likely to be joined by stablemates Podium and Candle after they both recorded impressive wins last week.

Podium made an auspicious debut in a maiden 1200m race at Wanganui, clearing out from her rivals over the final stages to win by 2-3/4 lengths, while Candle made it two wins from only three starts with a dominant 1-1/2 length victory in a Rating 65 race over 1100m at Awapuni.

“They both won really well and so we will now look at running them in the Cambridge Breeders’ Stakes, along with Wewillrock,” co-trainer Guy Lowry said.

Wewillrock has not raced since finishing a game third in the Group 3 Almanzor Trophy (1200m) at Ellerslie on January 22 but has been ticking over nicely in training and scored an impressive win in a 1000m jumpout at Waipukurau last Monday.

The El Roca gelding has had five starts for two wins, two thirds and a fourth.

Podium’s debut win at Wanganui followed a win in a 1000m jumpout at Hastings at the beginning of last month and a close second in a 1000m trial at Otaki on March 22.

The big Ocean Park filly drew one from the outside but began quickly and was able to take up a handy position one out from the inside fence. Jockey Johnathan Parkes sent her forward to challenge the leaders, three-wide, rounding the home bend and she raced clear with just a minimum of urging from the rider.

Podium is owned by Waikato Stud proprietor Mark Chittick and is out of the Australian-bred mare Quest For Quality.

Johnathan Parkes was also aboard Candle at Awapuni the following day and her winning performance was no less impressive. The Super Easy filly was back in the rear group in the early stages of the race but improved quickly around the field to be in a challenging position at the top of the home straight and powered down the outside of the track.

Candle showed she possessed plenty of potential when winning on debut over 1200m at Wanganui in November last year. She then only managed fourth out of six runners over 1200m at Hastings on December 31 but was found to be suffering from muscle complaint and was turned out for a spell. She showed she was ready for a winning performance fresh up by comfortably winning a 1000m Otaki trial on March 22.

The filly is owned by Guy Lowry and was bred by his Taupo-based father Pat. She is out of the No Excuse Needed mare Flare. 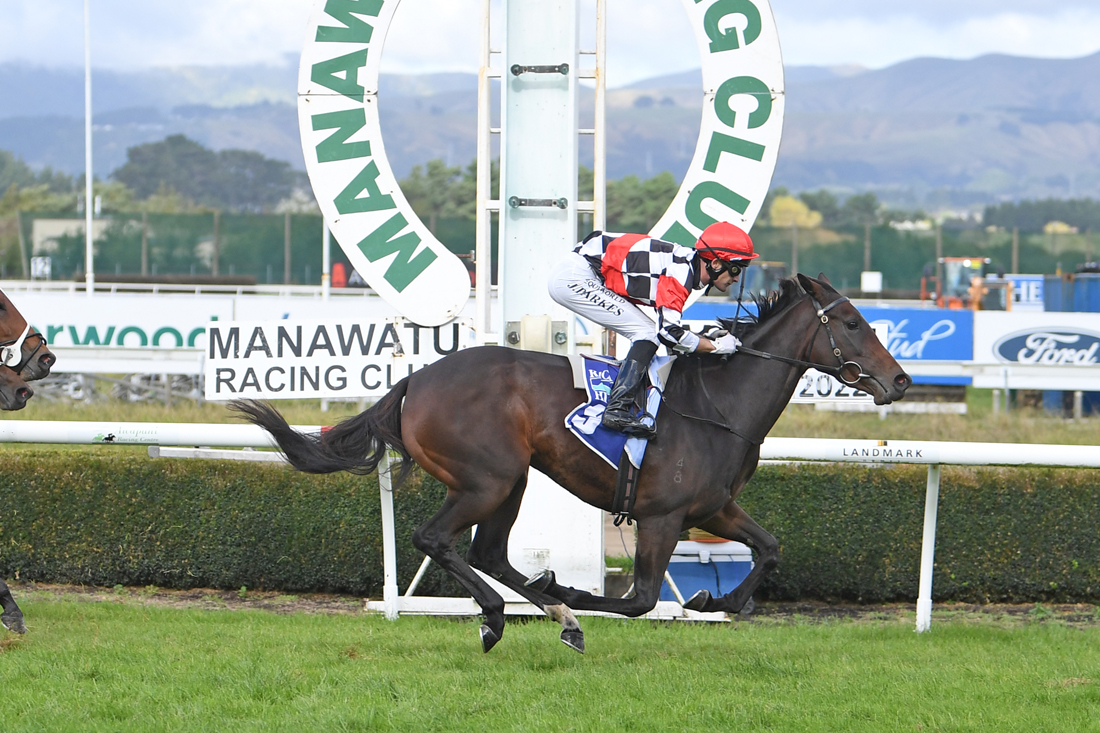 Candle crosses the finish line well clear of the opposition in a Rating 65 race over 1100m at Awapuni last week. It was the filly’s second victory from only three starts

Further rationalisation to maximise the full potential of remaining assets is paramount to the future success of the New Zealand racing industry.

While he has only had his feet under the desk for a couple of weeks, Sharrock is convinced a united approach is the way forward.

“At a very high level, if you look around the country and look at the asset base that the industry has, it would be safe to say, including Ellerslie, there would be a billion dollars’ worth of asset,” he said.

“You could argue that it is not returning what it should to the industry. If we can work together and rationalise the assets and start generating a reasonable term, and let’s assume five per cent which I think is conservative, that’s another $50 million running into our business annually.

“That all of a sudden, transforms the industry for generations beyond ours.”

He says further track closures will also be part and parcel of the way forward.

“I think there is further rationalisation of venues to come, without a doubt. There will be a feeling out there that we will need more tracks and we have come under pressure because we’ve got Te Aroha and Ellerslie both undergoing renovation,” Sharrock said.

“It has put a lot of stress on the north, but once we have worked through that I think clubs will still have their day, albeit at another location.

“Again, some are finding that it is costing a lot of money just to keep them ticking over.”

Sharrock is mindful of the pace of change and believed there was cause for optimism on that front.

“I’m sensing some real momentum around changes. People are accepting that if we do want to be regarded as a highly regarded sports industry in a decade’s time, we need to make some serious moves in the next short while,” he said.

“Probably the most positive is the amount of discussion going on at club level, around clubs working together for better outcomes.

“Clearly, this was led by ATR with Ellerslie and Counties coming together and there are some very good conversations going on around the country.

“There are a number of green shoots within the industry, purely from a wagering point of view things are going really well.

“That’s the engine of the industry, but clearly we have issues around our infrastructure, in terms of tracks and we’re currently embarking on a plan to improve those within the next two or three years.”

Sharrock acknowledged that not all change would be embraced by all, but moving with the times is imperative.

Sharrock said training and recruitment, with an accent on youth, is now underway to hopefully encourage more people to take up careers within the racing industry.

“We need to continue to train and develop our apprentice base and that needs an overhaul and is in the process of happening,” he said.

“There are a couple of exciting things that will come to light in the next month or month and a-half. We will be looking to encourage more quality young people, into the industry.”

Sharrock speaks from lengthy experience through his involvement with other sports.

“The business that I have had, and am still a shareholder in, was a global sports management business,” he said.

“It acts for professional players at rugby and rugby league and also acts for coaches and everybody else in those industries, as well as a consultancy business to clubs and is quite broad now.”

Sharrock’s family has a long-time involvement with racing, his aforementioned brother Allan is a successful trainer, as was his late father Bob.

Having raised the bat for a century of wins together, Roger James and Robert Wellwood are looking to build their innings further in black-type races over the next week.

These targets come after James and Wellwood reached a major milestone when Urban Myth won a maiden race at Pukekohe last Sunday. It was their 100th success in what is their fourth season training together.

James and Hastings-born Wellwood have won 27 races so far this season and their prizemoney haul, of more than $1.3million, is the best that James has achieved in New Zealand in a career stretching back to the early 1980s.

“It’s been a good season for us. We’ve won a lot of nice races, which is good for the owners, and it’s good for the fillies and mares to be winning black type races,” James said.

Exciting two-year-old filly Wolverine has been turned out for a winter spell with her Awapuni trainer Roydon Bergerson looking at preparing her for a Melbourne campaign in the spring.

“We are working through her plans at the moment but it is more than likely she will start her three-year-old season over there.”

Australian Bloodstock purchased a 50 percent holding in Wolverine after the daughter of Tivaci had won on debut at Otaki in the spring. The filly’s original owners, including Bergerson and respected Otaki horseman Chris Rutten, are still involved.

Bergerson and Rutten purchased her for $50,000 at New Zealand Bloodstock’s National Yearling sale at Karaka.