Wilson produced Red ‘N’ Surf to win a 2050m maiden race at the Wanganui meeting on April 8. It was just her 10th runner at a race meeting since taking out a Permit To Train licence in the winter of 2019.

Given a perfect ride by top Central Districts jockey Johnathan Parkes, Red ‘N’ Surf capped off a second and a fourth from his two most recent starts with a dominant 2-3/4 length victory.

The Redwood four-year-old gelding is one of six thoroughbreds Wilson presently has in work and is a horse that was gifted to her by his Whangarei breeder David Cairns.

“I broke him in and started him off and he went to Donna Logan’s stable but was sacked so I got him back,” Wilson recalled this week.

“He used to be our riding school horse because he was that slow that we used him to teach the young staff how to ride.”

Wilson said she didn’t really see much of a racing future for Red ‘N’ Surf until the country went into lockdown in March of last year.

“It meant that we were able to spend lots of time on him. We swam him in the river, worked him over the hills and just gave him lots of long slow kilometres of work and all of a sudden he started to switch on,” she said.

Red ‘N’ Surf was having his fifth career start last week. He beat only one horse home when making his debut over 1200m at Hastings in July last year and was immediately turned out for another spell.

He has since had four starts in a new campaign. He was a fresh up sixth over 2100m in January, second over 1600m in February, fourth over 2100m last month and then successful over 2050m at Wanganui last week.

Wilson says Red ‘N’ Surf is an out and out stayer and so she will now step the horse up to 2500m in the $50,000 Vintech Pacific Poverty Bay Cup at today’s Hawke’s Bay meeting.

“I’ve got no doubt he’ll get the distance and the more room he gets in his races the better he is,” she said.

Red ‘N’ Surf is out of the Rusty Spur mare Sun ‘N’ Surf, who was the winner of one race from three starts and that was over 1200m at Avondale.

Vicki Wilson was riding not long after she could walk. She was given a Shetland pony at the age of two, started competitive showjumping at 15, and began working full time with horses when she was about 17 years old on the family farm in the far north of New Zealand.

As a show jumping competitor, Vicki Wilson is rated one of the best in New Zealand and won the World Cup in 2014. Competing at the New Zealand Horse of the Year Show, she has won the Lowry Medallion five times and the Nationwide Cup nine times – more than any other rider in history.

She has represented New Zealand in the winning Trans-Tasman Young Rider team three times and in Europe jumped to 1.40m under the New Zealand flag.

She shot to fame as one of the three Wilson sisters (the others being Kelly and Amanda) who featured in the 2015 television series Keeping Up With The Kaimanawas which centred on how the trio managed to catch and break in wild horses that were running around in the Kaimanawa Ranges.

“Because of the Kaimanawas I got a trip to the United States for what is called The Colt Starting Competition, where you have to break in a horse, handle it and ride it within three days.

She now runs a world-class equestrian property out towards the coast from Havelock North and says she is able to give her team a varied training programme with the farm’s facilities.

“They work on the hills, they swim in the river, work on the track, and chase the sheep. There is a little bit of everything for them,” she said.

Wilson has been based in Hawke’s Bay for four years and says she has 150 horses on the property, some of them racehorses, some of them showjumpers and others either being rehabilitated or being broken in.

“We do a lot of breaking in for other people and a lot of rehab work, including tendon and ligament repairs.”

The property has a one kilometre training track on it as well as starting gates, a pool, water-walker and a vibrating floor.

Wilson is loving being involved in thoroughbred racing, but admits she is still learning a lot.

“I really enjoy the game of racing,” she said.

“I have got a lot to learn, it’s all very new to me. To me it’s just having a fit, strong horse, and as soon as I feel that they are strong enough in their body, and they are happy in their brain, then I can put pressure on them on the track.

“Red ’N’ Surf is really delivering now and I think he is going to get better and better.

“I am not in a rush. I am here to learn and enjoy the sport, and see how far we can go.” 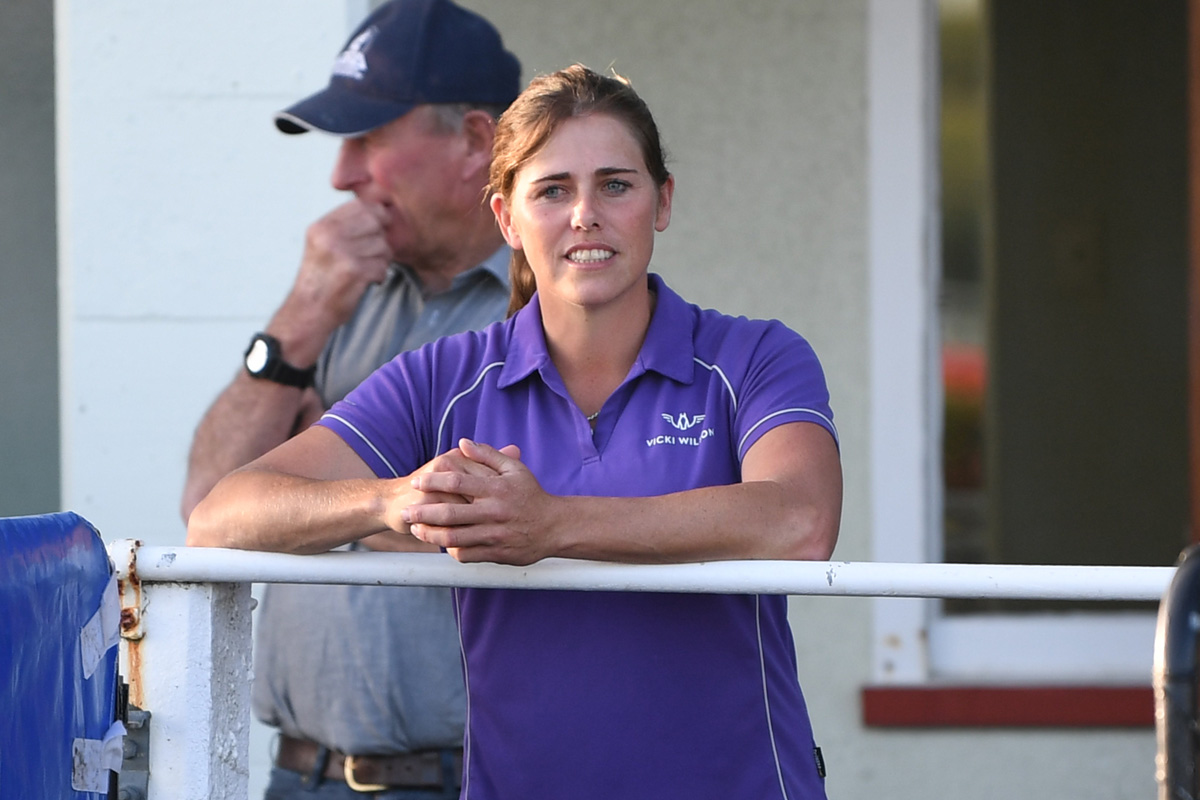 Napier racehorse owner Garry Trow is the recipient of the Kevin Wood Memorial by-monthly award for the months of February and March.

The award is presented by the Hawke’s Bay Racehorse Owners Association.

Trow owns a 25 per cent share in Military Step, a Tavistock five-year-old who has won three races from the Matamata stable of Jamie Richards, the most recent being the $20,000 South Waikato Cup (2000m) at Matamata on March 17.

Leading Sydney jockey James McDonald can’t wait to hop back aboard Verry Elleegant and act out their revenge against Addeybb in today’s Group 1 $A4million Queen Elizabeth Stakes (2000m) at Randwick.

The pair finished second to the European-trained galloper in the Group 1 Ranvet Stakes (2000m) and Queen Elizabeth last year, and while Verry Elleegant was able to reverse the tables when winning the Ranvet Stakes last month, McDonald is keen to complete the set and even the scores this weekend.

“Addeybb has beaten her twice, but I think we can level up this weekend,” McDonald said.

“I thought it was going to happen all over again (getting run down by Addeybb), but she pulled out all the stops, and hopefully it will work out the same this weekend.

“I am looking forward to it. She worked really well on Tuesday and felt terrific. It will take a pretty good horse to beat her. She is going into the race in really good form, I am rapt with her.”

“She is such a good 10-furlong (2000m) horse with her sustained speed, turn of foot, and being very adaptable.”

The Randwick track has been drying out this week but McDonald has no reason to doubt Verry Elleegant’s ability on a firmer surface.

“I am happy with the conditions that will be thrown at her,” McDonald said.

“She is a very adaptable mare and she is going into the race in career best form.”

Racing Minister Grant Robertson has announced he is appointing Elizabeth Dawson as the Chair of the interim TAB NZ Board.

Liz Dawson is an existing Board Director of the interim TAB NZ Board and Chair of the TAB NZ Board Selection Panel and will continue in her role as Chair of the selection panel to see through the recommendations to the Minister.

The Interim Board is responsible for the governance of TAB New Zealand until the substantive Board of Directors of TAB NZ is appointed.

Dawson replaces Dean McKenzie, who is taking up the role of Chief Transition Officer for the TAB.

He will lead the transition of the organisation to implement the reforms of The Racing Industry Act 2020, until the incoming TAB NZ Board is appointed and are able to recruit a permanent Chief Executive.

Liz Dawson brings considerable executive and governance experience in companies that are listed on the ASX and NZX.

She is a Member of the New Zealand Order of Merit and was appointed to the Racing Industry Transition Agency in July 2019. She also has experience in private, community and statutory organisations, including in sports governance roles.

“I want to thank Liz for stepping into this role, and indeed Dean for taking on the CTO role,” Robertson said

“It is important that we have stability as we undertake a thorough process to appoint a high quality permanent board for the TAB.”

Last month the Minister expanded the search for nominations for the permanent TAB Board. That process is expected to take a number of months to finalise.