Exciting Hastings-trained three-year-old Basarwa made it two wins from only four starts with a dominant fresh up performance in a Rating 65 race at Otaki last week but still has a lot to learn.

The Atlante gelding started a hot favourite for the 1400m event but gave his large band of supporters some reason for concern before stamping his authority over the final stages.

Jockey Johnathan Parkes bounced Basarwa out well from the number one barrier and quickly secured a trailing position on the fence.

The leader He’s Done A Runner tried to pinch a break on the field coming to the home turn while Basarwa momentarily hit a flat spot and Parkes had to suddenly start to urge his mount along to get him back onto the bit.

But turning into the straight Parkes was able to angle the horse away from the inside rail and into the clear and he started to hit full stride.

Basarwa swept to the front inside the last 200m and Parkes only had to keep him going with a strong hands and heels ride as he extended late to win by a length.

Guy Lowry, who trains Basarwa in partnership with Grant Cullen, has always held the horse in high regard and is confident he will only get better with more time and race experience.

“He is probably still a bit weak and is doing a few things wrong but he will make into a very nice horse,” Lowry said.

Basarwa showed a glimpse of his ability when winning a 1000m Foxton trial by 3 lengths in October last year and then came from well back on the home turn to score a 1-1/4 length maiden win over 1200m on a slow track at Hastings the following month.

The horse then finished a gallant second in a 1400m three-year-old race at Trentham which prompted his connections to test him against the top three-year-olds in the Group 1 Levin Classic (1600m) on the same track in January.

Basarwa only managed eighth in that classic but it was a better run than it looks on paper. He dwelt at the start and then again hit a flat spot at the 600m and was a clear last when the field flattened for the run home. He only really started to hit top gear in the last 300m and made up a lot of ground late.

The horse was then turned out for a spell but showed he was ready for a top fresh up performance last week after finishing a close second to open class galloper Colorado Star in a 1000m Foxton trial last month.

Basarwa is owned by prominent Wellington thoroughbred owner-breeder Lib Petanga and Masterton bloodstock agent Bruce Perry and they bred the horse out of the O’Reilly mare Kalahari Princess.

The horse’s grandam was the Maroof mare Zoilus, who was the winner of five races in Australia.

They sold the resultant colt for $80,000 at the 2017 Karaka yearling sales to Australian-based trainer Trent Busuttin but the horse was injured and is unraced at this stage.

Basarwa is the only other living foal produced by Kalahari Princess and Perry and Patenga decided to race him together.

“We thought he wasn’t going to make much at the sales so we might as well put him into work,” Perry recalled.

Guy Lowry said Basarwa has come through his last start win in great order but there has been no decision on where the horse will race next. There is also a chance he could now be sold overseas.

Hawke’s Bay-bred and part-owned Flying Surf, a decisive winner of a Rating 74 race at Otaki last week, is starting to build a consistent good record for her connections.

The five-year-old mare was chalking up her third career win and has had 14 starts this season for two wins, five seconds and a third, with some of those second placings being very narrow defeats.

Flying Surf is by Niagara out of the Towkay mare Surf Patrol and is owned by a group that includes well known Central Hawke’s Bay thoroughbred breeder Sue Harty and Hastings-based Neville Robertson.

Flying Surf had moved up to second entering the home straight and maintained a strong finish to win by 1-3/4 lengths.

She is now expected to line up at next Saturday’s Hawke’s Bay meeting at Hastings, in either another 1600m race or a step up to 2200m.

Melody Belle will end her racing career with top New Zealand jockey Opie Bosson on her back.

With the trans-Tasman bubble coming into effect last Monday, Bosson will be able to travel to Queensland over the next month to reunite with New Zealand’s darling of the turf for her final two races.

Bosson has had a strong association with the mare, having won nine of their 13 starts together and the combination won the Group 2 Sires’ Produce Stakes (1400m) at Eagle Farm, in Queensland, four years ago.

Melody Belle will be looking to bring up her 20th career win in the Group 2 Hollindale Stakes (1800m) at the Gold Coast on May 8 and then will try and make it Group 1 win number 15 in the Doomben Cup (2000m) a fortnight later.

Melody Belle’s Matamata trainer Jamie Richards is pleased with the progress the Commands mare has made since her last-start sixth in the Group 1 Tancred Stakes (2400) in Sydney on April 3.

The mare will now have a barrier trial at Rosehill next Tuesday and will remain in Sydney to have her final serious gallop on Tuesday, May 3, before being floated up to Queensland.

Hastings racegoers will get another chance to see live action when Hawke’s Bay Racing stages its annual May race meeting at the track next Saturday.

At this stage nine races are programmed, with the main event being a $37,500 open handicap over 2200m.

Brett Scott on the mend

Expat Kiwi horseman Brett Scott is happy to be back home after more than a month in hospital following being kicked in the head by a horse.

“I am just trying to get back in the swing of things and get my head working right again. I am definitely improving,” the Mornington trainer said after being home for five days.

Scott said he suffered a brain bleed as a result of the incident, which affected his speech and memory.

“A horse kicked me in the left side of my head and basically knocked me out stone cold,” he said.

“It has just been something I have been trying to get back and those first few weeks I was in another place and had no idea what they (doctors) were asking me. Thankfully I am improving, and that is all I can hope for.”

Scott is enjoying being back with his family and said his wife Kylie has been able to keep their stable ticking over.

“We have worked together for so long and she knew what she had to do and had the right people around her to help her at the time,” Scott said. “She has done a great job and I am glad that she has been able to continue on without me.

While back at home, Scott is still taking it easy and focussing on his recovery.

“I have got professionals to help me and I would like to say that one day soon hopefully I will be able to get back on a horse at some stage.” 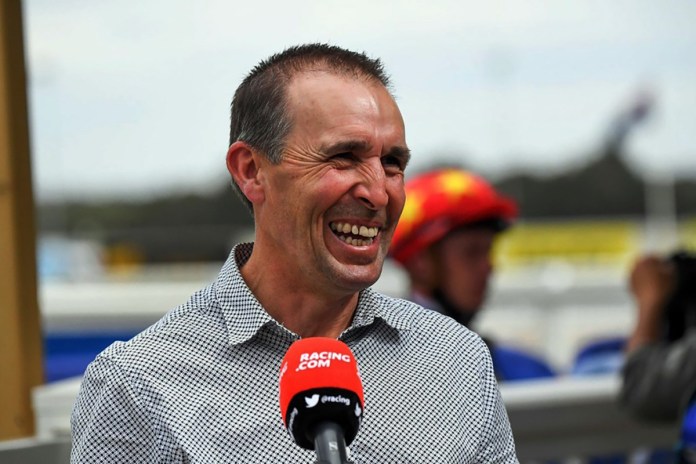 Brett Scott on the road to recovery

Allpress was the Proisir four-year-old mare’s regular rider in New Zealand, guiding her to three wins from her seven starts under the care of Stratford trainer Trudy Keegan.

The highlight was her win in the Group 3 Canterbury Breeders’ Stakes (1600m) at Riccarton last November.

Now with Kyneton trainer Charles Cassar, Aimee’s Jewel has won two jumpouts in preparation for her Australian debut over 1300m at Sandown, the most recent at Kyneton last Monday.

“I’m really excited to go over and ride her,” Allpress said.

The last time Allpress rode in Australia, she finished seventh on Mirkola Lass in the Group 2 Brisbane Cup (2400m) at Eagle Farm in 2009 but she has had plenty of international success since, winning races in Japan, Singapore and Malaysia and last year becoming the first woman to ride a winner in Saudi Arabia.