There was no more deserving winner at last Sunday’s Awapuni race meeting than Hastings-trained She’s So Reliable.

The John Bary prepared mare finally broke through for a maiden victory after recording four second placings from her four most recent starts, with two of those being very narrow defeats.

Bary decided to give the daughter of Reliable Man a break following her last start second over 2050m at Tauherenikau on January 2 and she went into last Sunday’s 1550m race on the back of a second in a 1000m Foxton trial on April 12.

Allpress jumped the mare out well from the barrier and settled her fifth on the inside. She bided her time before angling away from the fence coming to the home turn and lodged a claim early in the home straight.

Both Just Ben and Tequila Spirit kicked on well but She’s So Reliable kept up a strong run and surged past them close to the line.

“She has certainly lived up to her name as she always tries hard.”

Sanders said the win was made special in that the horse’s Auckland part-owner Andy Hauraki had made the long trip down to Palmerston North to watch her race.

“Andy hasn’t seen her much because of Covid restrictions but drove down specially. He races the mare with his wife Celeste.”

She’s So Reliable is out of the now deceased Zabeel mare Capacity and was a $40,000 purchase from the 2019 Karaka yearling sales. She is a half-sister to the five-race winner Single Minded.

Hawke’s Bay owned and trained Free Bee made it two wins from three starts this campaign with another game performance in a three-year-old 1200m race at Awapuni last Saturday.

The Rageese filly, prepared on the Hastings track by Mick Brown and Sue Thompson, broke out of maiden ranks with a narrow win over 1200m at Waverley on April 1 and followed that up with a creditable sixth over the same distance at Woodville a fortnight later.

A positive ride by talented apprentice Joe Kamaruddin paved the way for Free Bee’s second success last Sunday. He settled the filly third in the early running but then quickly sent her forward to challenge for the lead when the pace slackened coming to the home turn.

Free Bee took over at the top of the home straight but then had a tussle with first starter Soowin before edging clear to win by three-quarters of a length.

Free Bee is owned by Hawke’s Bay couple John and Lucy Scoular along with their son Andy and daughter Sally Tothill.

They bred her out of the Volksraad mare Bizz, who is now deceased but also left five other individual winners including the New Zealand Cup winner Bizzwinkle.

French trip off for Verry Elleegant

A tilt at the Group 1 Prix de l’Arc de Triomphe (2400m) in France is no longer on the table for Australasia’s darling of the turf, Verry Elleegant.

“After a really good discussion with the ownership group, it has been decided that Verry Elleegant will have a five-week spell and resume pre-training to be prepared first-up for the Group 1 Winx Stakes (1400m),” trainer Chris Waller said in a statement.

“Whilst running her in the Arc would be a dream come true for all of us, we just felt that it would come around too soon to enable her to have a proper spell and be fully prepared in Australia for this assignment.

“However, a trip to Europe a little later in the spring is still strongly on the cards providing she returns to the form she showed in the spring when dominating the Melbourne Cup (3200m).

“A race that we have identified as a prospective target is the 2400m Fillies and Mares Group 1 race on Champions Day at Ascot (October 15), one of the most prestigious race days in the world and a worthy stage to showcase her talents.

“It is likely that she will have three runs in Australia in the spring with the Winx Stakes, The Chelmsford, The Kingston Town and The Underwood all being considered prior to the decision being made on a Melbourne Cup defence or a trip to Europe.”

The daughter of Grangewilliam Stud stallion Zed was originally trained in New Zealand by part-owner Nick Bishara, for whom she won two of her three starts before her partial sale and move to Australia.

She has subsequently won a further 14 races, including 11 at Group One level, with almost $A15 million in earnings. 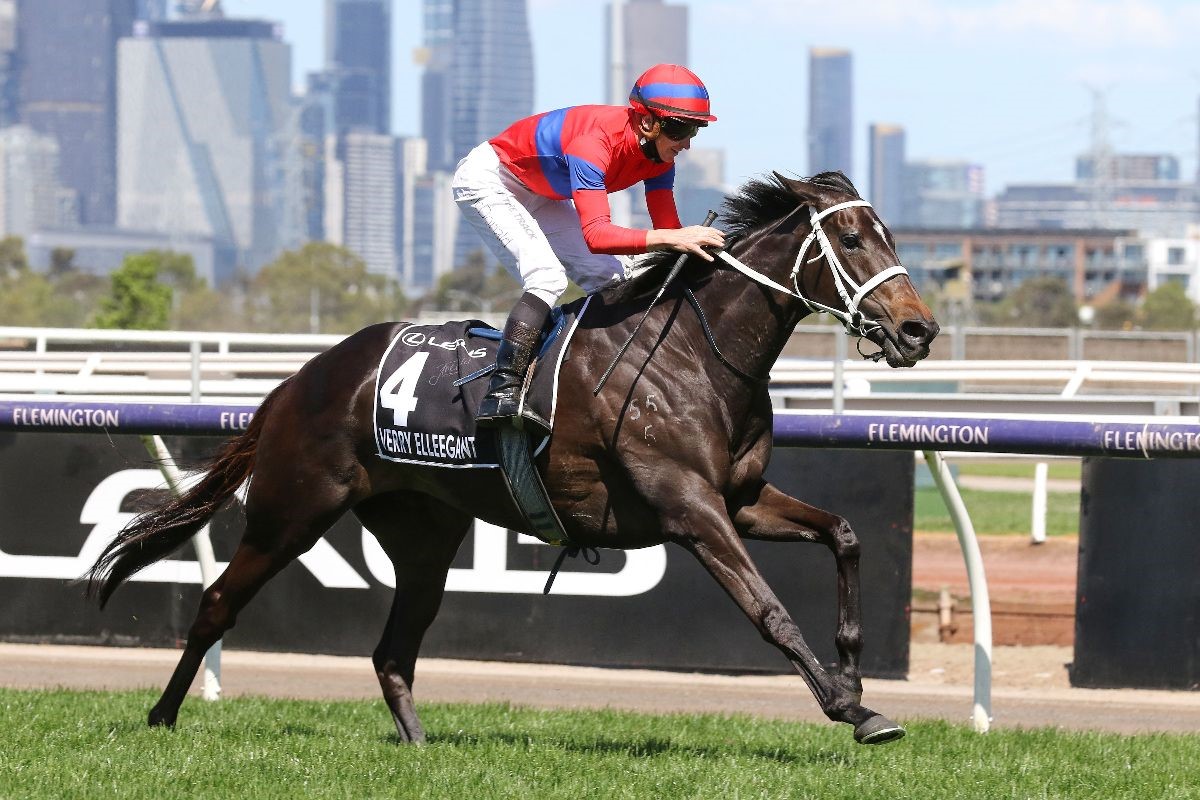 Verry Ellegant will not contest the Prix de l’Arc de Triomphe but may head to England in the late spring.

Two high class racemares, Two Illicit and Sinarahma, are expected to have their last race starts when they clash in this weekend’s Group 2 $110,000 Travis Stakes (2000m) at Te Rapa.

The connections of both mares have indicated they will be retired to the broodmare paddock later this year and, with the onset of winter track conditions, Saturday’s race is likely to be their last.

The Roger James and Robert Wellwood-trained Two Illicit has carried the colours of breeder Trelawney Stud with distinction and, as such, she will be a valuable addition to that stud’s broodmare band.

Two Illicit has won seven of her 20 starts, including the Group 1 Captain Cook Stakes (1600m) at Trentham and succeeded at Group 2 level in the Royal Stakes (2000m) and Waikato Guineas (2000m) and also recorded a Group 3 victory in the Red Badge Spring Sprint (1400m) at last year’s Hawke’s Bay spring carnival.

“This will be her swansong on Saturday and she’s been a terrific mare. We have been privileged to train a mare of her quality,” Wellwood said.

“We were so glad she picked up a Group 1, she really deserved to go to stud having that next to her name.”

The Darci Brahma mare, a daughter of Sharrock’s Group 1 winning mare Shez Sinsational, is the winner of seven races from 32 starts including the Group 3 Cuddle Stakes (1600m) at Trentham and Listed Wairarapa Breeders Stakes (1600m) twice.

“It will probably be her last run on Saturday and she’ll be off to the broodmare paddock next season. She’s done a bonny job for us and she’s out of a champion mare,” Sharrock said.

Sharrock said Sinarahma has trained on well since her close last start second to Charms Star in the Group 3 Manawatu Breeders’ Stakes (2000m) but admits she faces a tough task against Two Illicit under the weight-for-age conditions.