Prominent Hastings jumps trainer Paul Nelson has had plenty of top-class hurdlers pass through his care over the years but he labelled The Cossack as the best after his dominant win in the $75,000 Hospitality New Zealand Canterbury 131st Grand National Hurdles (4200m) at Riccarton on Wednesday.

“It’s incredible,” said Nelson, who trains in partnership with Corrina McDougal. “It is not often that a horse can win the three big ones in the same year and this horse has done it.

“He is probably the best horse we have had.”

While The Cossack took good form into the race, he hadn’t been sighted on raceday since his win in the Wellington Hurdle at Hastings last month, and Nelson was wary that his charge may have been too fresh.

He added that, on the morning of the race, he took The Cossack for a walk on the lead but the horse took him for a walk instead.

“We came back and I talked with Michelle Northcott and she went and worked him a couple of times in the centre (of the track) because he was so fresh.

“It helped us because when he came out for the race he was a sensible horse.”

Originally trained by fellow Hawke’s Bay horseman John Bary, Nelson saw a lot of potential in The Cossack and was able to negotiate a deal to buy him last year.

“We heard that he was for sale and that some Australians were looking at him,” Nelson said.

“They turned him down and I was watching him when John Bary had him, and I was keeping in close contact with Aaron (Kuru), who rode him.

“We talked with Peter Grieve and he actually belonged to his brother Ivan, and John Bary as well. I said ‘we should have a go at this horse’ and that was it, we managed to buy him.

The Cossack is now raced by Nelson along with Peter Grieve and his son Doug and fellow Hawke’s Bay man John Frizzell.

The Cossack has won six races since joining Nelson’s barn, and placed on another five occasions from 12 starts and has won his new connections more than $200,000 in prizemoney.

A trip north to Ellerslie to defend the now eight-year-old’s crown in the Great Northern Hurdle is enticing for Nelson, but he said he will wait until their return to Hastings before making a decision.

“I know the Northern is beckoning, but we will just have to see.”

Victorious jockey Shaun Phelan was jubilant after the race, pumping the air as he crossed the finishing line.

It was the Waikato rider’s first win in the race after a number of placings.

“It is very special, it is my first one,” Phelan said. “I haven’t had much luck in the race, I think I have had a couple of placings. I was just on the right horse at the right time.

“He was pretty keen early. I just wanted to get him settled and into a rhythm, and hopefully out slog them in that ground, and he certainly did that.”

The Nelson/McDougal stable scored a winning double at Wednesday’s meeting when stablemate Nedwin was victorious in the $22,500 Nautical Insurance Duke Of Gloucester Cup (1800m) in the hands of Hastings amateur jockey Leah Zydenbos.

For 20-year-old Zydenbos it was her second victory in the space of 10 days after she posted her first race day success aboard another Nelson/McDougal trained runner, Al’s Red Zed, at Te Aroha on August 1.

Two in a row for Mizzena

Not many jumpers win two races in the space of six days but Hawke’s Bay-owned Mizzena did it with real authority last week.

The daughter of Zed has now had seven hurdle starts and has never finished further back than fifth, with a record of three wins, a second, a fourth and two fifths.

Mizzena was bred by Barry Smyth, a former long-time board member of Hawke’s Bay Racing. He has retained a 40 per cent racing share in the mare and races her with his Sydney-based brother John and six other close Hawke’s Bay Friends, Simon and Melissa Turner, John McKenzie, Ron Robbie, Neil White and Malcolm Campbell.

The mare is prepared by Wanganui’s Kevin Myers, an astute trainer of jumpers who told Smyth when he first took the mare over that she would make into a good jumper.

Jockey Shaun Fannin, who has been the number one jumps rider for the Myers stable in recent years, has been aboard Mizzena in all three of her hurdle wins.

Fannin settled her in the last four or five in the early stages of last Friday’s Wanganui race and kept her wide to give her a good sight at the fences.

Mizzena improved to fifth with just over a round to go and was travelling a bit too keenly at that stage but Fannin managed to get her to settle again going down the back and waited until the last 900m before asking his mount for a serious effort.

Mizzena quickly raced up to join the leaders coming to the home turn and took over with two fences to jump. She established a good break over her rivals once over the last two obstacles and Fannin only had to keep her going with a hands and heels ride to the line for a dominant win.

Barry Smyth bred Mizzena out of the Al Akbar mare Moonlighter, who recorded one third from only seven starts.

He recalled that she was a mare that needed time but the syndicate that raced her didn’t want to wait around so he gave her away as a show hack for a while until he was ready to breed from her.

Moonlighter has only produced two foals to race, the first being the Iffraaj mare Iffonlynaomi who only had three starts for a third before developing a wind problem.

However he is still breeding from Moonlighter and has high hopes for a Rip Van Winkle four-year-old mare out of the mare, that is presently in work with Waipukurau trainer Kate Hercock. She has been named Moonlight Hustler and has had a couple of Hawke’s Bay jumpouts, finishing second in one of them.

Moonlighter has also left a Per Incanto three-year-old that has been sent to Australia to be trained by Matt Cumani at Ballarat.

He has been named Cantolight and had a light preparation earlier this season before being gelded and spelled. He is now back in work and being prepared for a spring campaign.

Smyth has retained a racing share in both Moonlight Hustler and Cantolight.

The training partnership of Guy Lowry and Grant Cullen were the leading Hawke’s Bay trainers on wins for the 2020-21 season, edging out their arch-rival John Bary.

The Lowry/Cullen stable produced 13 winners compared to Bary’s 11, with the Paul Nelson and Corrina McDougal third on 10.

Besides their winning tally the Lowry/Cullen stable also racked up 10 seconds and nine thirds from 153 starters. Two of the 13 wins came in black type races, with Shezzacatch taking out the Listed $50,000 El Roca-Sir Colin Meads Trophy (1200m) at Hastings and Mohaka winning the Listed $50,000 Feilding Cup (2100m). 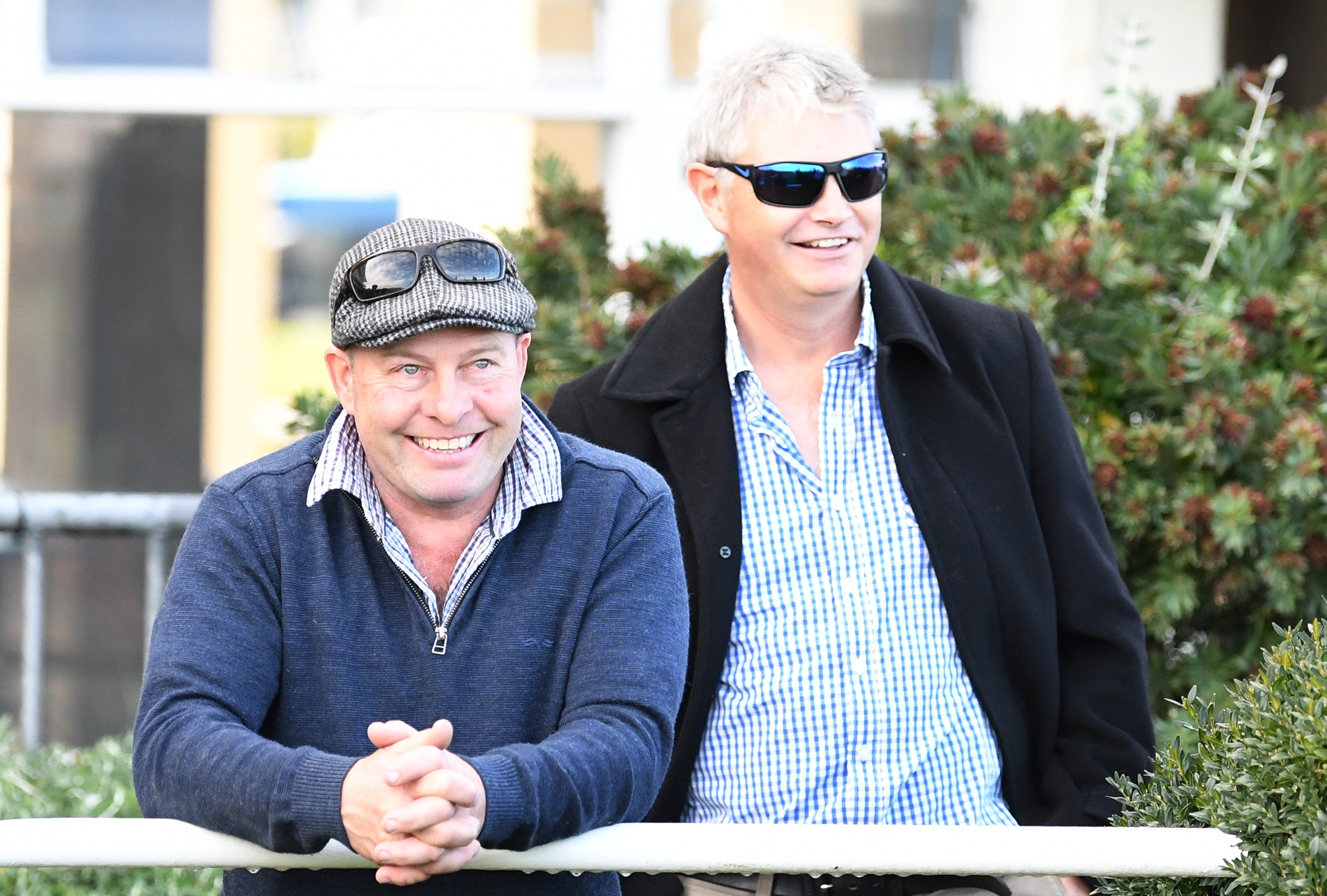 Catalyst on the way back

Class galloper Catalyst showed he is on target for the Group 1 $220,000 Tarzino Trophy (1400m) at Hastings in a month’s time when finishing a close second in a 950m trial on the Cambridge synthetic track on Thursday of last week.

The Darci Brahma gelding pleased his connections when finishing a nose behind stablemate Marchioness.

The dominant force as a spring and summer three-year-old of his year in New Zealand, Catalyst has raced just once in the past 18 months, when puling up sore after trailing the field home in the Group 2 The Shorts (1100m) on Sydney’s Randwick track last spring.

The now five-year-old is having his first campaign for Cambridge trainer Tony Pike, after his former conditioner Clayton Chipperfield stepped away from training.

Raced by The Oaks Stu’s Dick Karreman, Catalyst  has options on both sides of the Tasman, with connections delighted to see the galloper retain his zest for racing.

“He’s 40 to 50 kilos heavier than e was as a three-year-old, so he’s certainly muscled up,” The Oaks Stud manager Rick Williams said.

Catalyst will likely trial again with races such as the Group 2 $110,000 Foxbridge Plate (1200m) at Te Rapa on August 28 and the Tarzino Trophy on September 11 likely early season assignments.

Williams is wary of the Te Rapa track given Catalyst failed on the sandy surface at the first start of his career, while he is 23rd in order of entry for the Tarzino Trophy, which has a capacity of 16 runners.