Hastings amateur jockey Leah Zydenbos reached the pinnacle of her life-time involvement with horses when she kicked home her first winner last weekend.

For the Christchurch-born rider it was a tremendous thrill and came at just her sixth race-ride, with her previous best placing being a fourth on No Tip at the Hawke’s Bay meeting on July 22.

Both Al’s Red Zed and No Tip are prepared by the Hastings partnership of Paul Nelson and Corrina McDougal and Zydenbos is grateful that the powerful stable had enough confidence in her ability to put her on their horses.

Not that Zydenbos lacks horse experience. She attended pony club as a youngster before progressing to be successful at show jumping and then competing on the international stage in mounted games.

Zydenbos also worked for three years in the top Riccarton stable of Michael and Matthew Pitman and says that’s how she got into racing.

She moved north to Hastings last year to join the stable of Guy Lowry and Grant Cullen and was granted an amateur jockey’s licence a few months ago.

Zydenbos said Al’s Red Zeb was not an easy ride in last Sunday’s race, with the horse wanting to switch on and off during the running.

The gelding settled third last early before improving to fifth going down the back straight but then drifted again in the middle stages. Zydenbos then sent him forward again starting the last 800m and they ranged up to join the leaders rounding the home turn.

Burcha, ridden by Clinton Isdale, had taken a clear lead but Al’s Red Zed quickly joined and the two horses set down to fight out the finish in a slog to the line. There was little between the two until the last 100 metres and, in a David and Goliath struggle, the much bigger Al’s Red Zed managed to surge ahead in the final few strides to win by a neck.

“He was quite green and lost ground at times but he came again at the finish,” Zydenbos said this week.

“About 150 metres out I knew he was travelling much better than the other horse and that’s how it worked out.”

Al’s Red Zed was having just his third race start. He finished fourth in a maiden 2060m race at Wanganui in June before being pulled up when making his hurdle debut over 2500m at Hastings last month.

The horse was bred by a group that includes New Plymouth trainer Allan Sharrock and former Hawke’s Bay Racing chief executive Andrew Castles and is by Zed out of the Faltaat mare Taatledoya.

He is now raced on lease by a group of Hawke’s Bay people with Paul Nelson and Corrina McDougal having a racing share along with McDougal’s partner Richard Fenwick, David Nelson and the brothers Terry and Turei Haronga.

Zydenbos is now looking forward to next Wednesday as she has been offered a ride in the $22,500 Duke Of Gloucester Cup (1800m), the country’s most prestigious race for amateur riders, which will be run on the second day of the Grand National meeting in her home town of Christchurch.

“I’ve been offered a ride for Paul Harris but I’m not sure what the horse will be as I think he will have two in the race,” Zydenbos said.

Last weekend was one to cherish for the Hastings training partnership of Paul Nelson and Corrina McDougal as they produced three winners in the space of two days and also picked up a second placing with their only other runner.

The pair took out the feature at Rotorua last Saturday, the $50,000 Taumarunui RSA Gold Cup, with Suliman who was their only runner at the meeting.

They then headed to Te Aroha on Sunday where they lined up three runners, winning the amateur riders’ event with Al’s Red Zed, the maiden steeplechase with Argyll and picking up a second with No Tip in the $20,000 open steeplechase.

Suliman may have put a proposed jumping career on hold for a time being as he produced a superior staying effort in testing track conditions to take out the 2200m flat event at Rotorua.

The now eight-year-old Redwood gelding had done his early racing from Graham Richardson’s Matamata stable where he won five races before a change of ownership saw him transferred to Nelson and McDougal earlier this year, with a jumping future in mind.

Nelson was adamant there was still life in his legs on the flat and the horse delivered on those thoughts in emphatic style at Rotorua as apprentice Elen Nicholas guided him through the field approaching the home turn before booting him clear to score a 2 length win over Timberlake.

For Nicholas it was her 21st win and her biggest success to date and it also provided her with personal satisfaction in that she was repaying Nelson and McDougal, who gave her a start when she first arrived in New Zealand from the United Kingdom.

“When she first came to New Zealand, she came to us and spent some time here,” McDougal said.

“She had an amateur license then and had a few rides before she went home to Wales for a while, then came back to us again before moving north.

“To see how well she has been going is really wonderful and I’m glad we could give her one of her biggest wins so far.”

Suliman is now owned by the I See Red Syndicate, a large group of thoroughbred racing enthusiasts that have had a number of successful horses in Paul Nelson’s stable over many years.

McDougal said Suliman does jump well and a career over fences is in the planning, but not as soon as was first thought.

This year’s Taumarunui Cup provided a special result for Westbury Stud resident stallion Redwood as he produced the first three horses home. The son of High Chaparral will stand at a fee of $8000 plus GST in the coming breeding season.

Argyll could be yet another rising jumping star in the Nelson/McDougal stable.

The eight-year-old gelding had recorded two thirds from four starts over hurdles but was having only his second start over the steeplechase fences and produced an excellent performance to score by 2-1/4 lengths.

Jockey Shaun Phelan had the son of Gallant Guru in the first four during the early stages of the 3500m event and tried to save as much ground as he could.

Argyll had drifted to second last of the eight runners with 800m to run but improved quickly once Phelan asked him for a serious effort and was just in behind the leaders coming to the home turn.

Zinzan, who had led from the outset, jumped the last fence with a good advantage over Argyll but the latter showed great acceleration in the run to the line to record a strong win.

Argyll was bred by Hawke’s Bay couple Garry and Jan Sherratt, who race him in partnership with Cambridge trainer Ben Foote and his close friend Kim Rogers.

He is out of the Corrupt mare Politic, who won four races for the Sherratts, including one over hurdles. 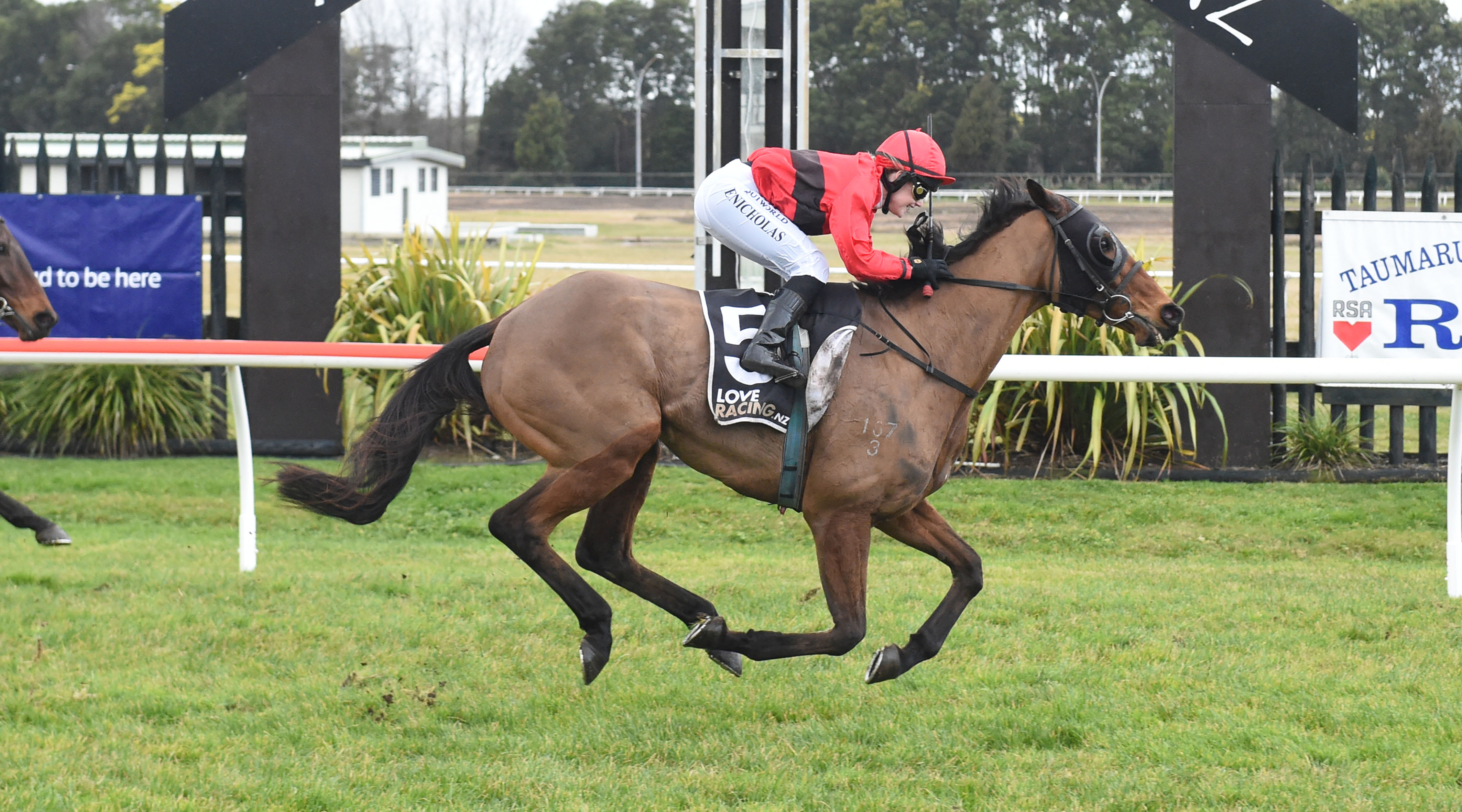 Hastings-trained Suliman and apprentice jockey Elen Nicholas are clear of their rivals as they cross the finish line in last Saturday’s $50,000 Taumarunui Cup at Rotorua.

Two in a row for Locally Sauced

Locally Sauced, part-owned by Hastings woman Irene Downey and her son Josh, made it two wins in a row with another game performance in a Rating 65 race over 2200m at Te Aroha last Sunday.

The 10-year-old Iffraaj gelding had won a jumpers’ flat on the same track on July 11 and now boasts a record of eight wins, seven seconds and 10 thirds from 90 starts.

Trained at Waiuku by the husband and wife team of Grant and Tana Shaw, Locally Sauced finished third in a 4150m maiden steeplechase at Ellerslie two months ago and will revert back to jumping the big fences in the maiden steeplechase over 3200m at Riccarton today.

The 25-year-old notched up 16 victories over fences, six more than his nearest rival Dean Parker.

A second premiership seemed a longshot for Fannin when he fell from Laekeeper in the Hawke’s bay Hurdle at the beginning of the season. He lost his two front teeth in the fall and had to have another two removed but was back in the saddle a month later and scored his biggest victory of the season, aboard Magic Wonder in the Great Northern Steeplechase (6400m) at Ellerslie in October.

Four of Fannin’s 16 victories last season came in prestige jumping races, all over the big fences. In addition to the Great Northern, he also won the Wellington Steeplechase on Yardarm, and both runnings of the Waikato Steeplechase – the Covid-19 delayed edition last year aboard It’s A Wonder and this year’s version on Mesmerize when it was run in its normal May timeslot.

Fannin has been riding over fences since 2014 and said he was particularly grateful to leading jumps trainer Kevin Myers, who had helped him get started.

“I owe all my success to Kevin,” Fannin said. “He gave me an opportunity right out of school and I’ve been doing my best ever since to really repay him. I’m really grateful to him for believing in me.”

Although Fannin has been hugely successful, he hasn’t won either Grand National jumps races, something he hopes to achieve in the next week at Riccarton.