The successful roll being enjoyed by Hastings trainer Guy Lowry has continued, with him saddling up two winners at Rotorua last week before sharing in the ownership of a horse that won a $A140,000 race in Sydney last Saturday.

Lowry trains in partnership with Grant Cullen and the pair produced two impressive maiden winners at Rotorua in Love Letter and The Stoney One.

He also has a third share in Waihaha Falls, a promising four-year-old by Sacred Falls who scored a game win in a Rating 72 race over 1500m at Rosehill on Saturday.

Love Letter was making her race debut when she lined up in a maiden race over 1230m at Rotorua and won at odds of 10 to one.

Lisa Allpress replaced Michael McNab as the jockey after the latter became unwell and didn’t fulfil his mounts at the meeting.

Allpress let Love Letter settle down in the back part of the field in a fast run race before improving between horses coming to the home turn. The Wrote filly only looked likely to fill a minor placing half-way up the home straight but dashed between horses in the last 100 metres to get up and score by a neck.

Love Letter is owned by two Cambridge men, Tony Rider and Pat Weal, who bred the filly out of the Captain Rio mare Divine Rio.

Rider and Weal now have another yearling filly by Wrote out of Divine Rio coming on.

Tony Rider is one of the most loyal clients of the Lowry/Cullen stable and also shares in the ownership of The Stoney One, who scored a dominant win in another maiden 1230m race.

The Pierro three-year-old was also ridden by Lisa Allpress. He jumped quickly from the barrier to take an early lead and never looked like being run down, surging clear in the final stages to win by 1-3/4 lengths.

It was The Stoney One’s third start and followed an unlucky debut fourth over 1200m at Hastings back in April and a fast finishing third over 1215m on the Rotorua track last month.

He is Australian-bred, being by Pierro out of the Charge Forward mare Western Gem and was put through last year’s Karaka yearling sales.

That qualifies him for the $1million Karaka Million Three-year-old (1600m) at Ellerslie on January 22, a race Rider and his Auckland-based partner Peter Jeffares, are now considering for the horse.

“He would probably need to win another race to make the field for the Karaka Million,” Guy Lowry said.

Waihaha Falls started out in the Lowry/Cullen stable and won a 1000m Foxton trial in October 2020 before he was transferred to the Sydney stable of John O’Shea.

He has now had five starts in Australia for two wins, the first coming at his debut over 1500m on the Rosehill track.

Lowry owns the Sacred Falls four-year-old in partnership with Gary and Mark Chittick of Waikato Stud and they bred the gelding out of the Scaredee Cat mare Think Mink.

Waihaha Falls only got home by a head last Saturday and was aided by a great ride from experienced jockey Hugh Bowman.

He positioned the horse perfectly in the trail and waited until well into the straight before angling him into the clear. Race favourite Francesco Guardi looked the likely winner when he hit the front wide out but Bowman drove Waihaha Falls through on the inside to get his head in front right on the line.

Lowry said O’Shea has some ambitious plans for Waihaha Falls but added that the horse needs a rain affected track to show his best.

“He coped with a good track there on Saturday but I think he probably needs a dead track at best,” Lowry added.

While O’Shea believes the gelding has a bright future instore, he said they will take a patient approach with him.

“He did a good job. It’s only his second run this prep, and fifth career run,” O’Shea said.

“Hugh (Bowman) was very happy with him and said he still has a lot more to learn and offer down the road.

"We have just got to go through the grades and get some runs on the board and teach him to be a racehorse,” he added. 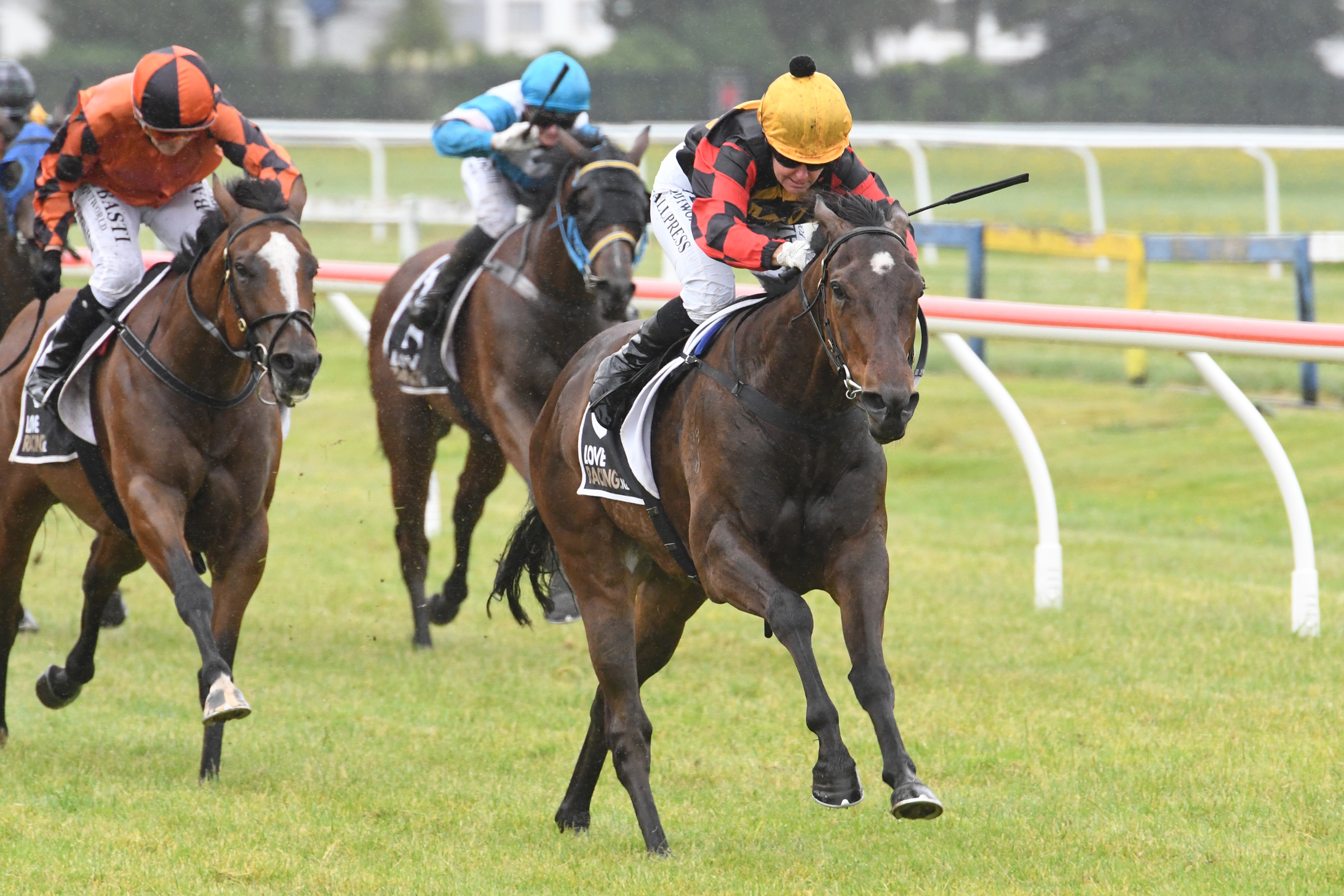 The Stoney One and jockey Lisa Allpress are clear of their rivals as they near the finish line in a 1230m maiden race at Rotorua last week.

The New Zealand thoroughbred industry was saddened this week to hear of the passing of young apprentice jockey Yong Chew in his native Malaysia.

The news rocked his friend and colleagues in New Zealand, particularly the Robinson family, with Chew apprenticed to Riccarton trainer Lance Robinson over the last two years.

“He went home two weeks ago,” Robinson said. “He spent a week in quarantine in Penang hospital and got home and spent time with his family for a week, so that was good.

“He had been battling an aggressive form of throat cancer for just on six months. He was determined that he was going to beat it. He went through chemo and all the treatments.”

With his family unable to travel to New Zealand, the industry got in behind the young rider, raising funds to cover the cost of his return to his homeland to spend his last days with his family.

“It cost a lot to get him home with the care involved, so thanks to Go Racing for making it possible. They were huge by organising a golf day with all the proceeds going to him,” Robinson said.

“NZTR (New Zealand Thoroughbred Racing) were really good to him too. They were fantastic and couldn’t have done anymore with the help they gave him.”

Initially beginning his career in Singapore under trainer Michael Clements, Chew moved to New Zealand a few years ago to further his riding career.

“He spent 18 months with Frank Ritchie (in Cambridge) and he decided he was better placed down here where he would get more opportunities,” Robinson said.

“He rode five winners and was a kid who was going to be alright.”

The racing career of exciting mare Sakura Blossom is over.

The daughter of Vancouver had won two of her three starts and was set for an exciting summer with nominations for both the Group 1 Railway Stakes (1200m) at Ellerslie and Group 1 Telegraph Sprint (1200m) at Trentham.

However, injury has taken its toll on the four-year-old, who will now head to the broodmare paddock.

“Unfortunately, she has had to be retired,” trainer Ben Foote said.

“She has the same ongoing issue in her right knee. She has had surgery on it before and, after her last race, she was found to have another two chips in it.”

It’s a devastating outcome for Foote, who said she oozed talent.

“I wanted to cry, she is potentially the best horse I have had anything to do with,” he said. “She will make a great broodmare I am sure.”

Sakura Blossom won on debut over 970m on the Cambridge synthetic track in early September and then produced one of the best performances seen on the Hastings track for a long time when winning her second start, over 1200m, on September 18.

That day she reared as the gates opened, losing many lengths, and was tailed off. She then had to be steadied when improving onto the heels of other runners passing the 600m before becoming unbalanced when she made contact with another runner early in the home straight.

By the time jockey Michael McNab finally got the mare in full stride she was giving the leaders a big start but such was her amazing turn of foot that she picked them up easily and won by three-quarters of a length.

Foote was aware he never had long with the mare after her previous injury, but he was still dejected about losing the mare from his barn before she was able to test herself in stakes company.

“Murray Brightwell (veterinarian) always told me I have only 10 to 15 15 starts max with this horse, so you are going to have to aim high if you think she is good enough,” Foote added.

“We have done that. People may have thought I was overhyping her, but she was definitely a Group One horse, we will just never be able to see it unfortunately.”

Quality mare Entriviere is building towards the Group 1 $240,000 Sistema Railway Stakes (1200m) at Ellerslie on New Year’s Day after a quick turnaround from a successful three-start spring campaign in Sydney.

The Jamie Richards-trained five-year-old has won six of her 10 lifetime starts, and enhanced her value significantly when wining the Group 2 Sheraco Stakes (1200m) fresh-up in Sydney, to complement a pair of Group 3 victories in New Zealand and two Group 2 placings in Australia.

Connections of the emerging star, who include Waipukurau’s Michael Ormsby, will be keen to see her tick the Group 1 box, as will the punters who have taken the early $2.80 TAB fixed odds quote about the mare winning the Railway.

“She just had a couple of weeks out. She maintained quite a bit of residual fitness from that Australian preparation but we wanted to pull up stumps nice and early to give her the chance to get back for this race,” Richards said.

“She will trial at Rotorua on December 13 and then have an exhibition gallop before heading to the Railway fresh-up.”