Shackeltons Edge indicated he could be the next star jumper in the Hastings stable of Paul Nelson and Corrina McDougal after his runaway win in the maiden steeplechase at last Saturday’s Hawke’s Bay meeting.

The seven-year-old disputed the pace from the outset in the 4000m event and gave a superb display of jumping throughout.

He was taken on in front by Locally Sauced mid-way through the race and the pair went head-to-head from there until the last 600m, with Shackeltons Edge outjumping his rival with some magnificent leaps going down the back-straight.

Jockey Hamish McNeil decided to put a bit more impetus into the race when he urged Shackeltons Edge to take a clear advantage entering the last 600m, with the horse again producing tremendous leaps at the final two fences before racing away for a 13-1/4 length victory.

Blanco Bay made up ground late to claim second by a long head from Pierian Spring with Oxymoron getting up in the last few strides to take fourth place off a tiring Locally Sauced.

Shackeltons Edge was making his steeplechasing debut with his only other jumping races being in two hurdle events, finishing fourth over 2500m at Hastings in May and sixth over 2760m at Ellerslie last month.

The son of Thano was previously trained by Cambridge-based Ben Foote and had 18 starts on the flat for a second and two thirds.

Foote still part-owns the gelding along with the horse’s Waikato breeder Ken Garnett and the pair decided to leave him with Nelson and McDougal after he finished third in a 2100m maiden race at Hastings in July last year.

“We gave him a few flat races after Ben left him with us but he didn’t start jumping until this year,” Nelson said.

“Mind you he had done a lot of schooling when he was up north, with Craig Thornton doing a lot with him, so he was pretty ready when he got to us.”

Nelson said he had no immediate plans for Shackeltons Edge but indicated the horse could head down to Riccarton next month for the Grand National meeting.

“There is Manawatu in three weeks but the track is likely to be really heavy there and so he might get a trip to Christchurch,” he said.

Paul Nelson said the horse had been off-colour in the days leading up to the race so the pre-post favourite was scratched from the 3100m event on Saturday morning.

Nelson said The Cossack looked a bit more like his old self when he came galloping down the big hill on his property last Sunday but added that the horse will not be put under pressure again until his blood count is 100 per cent.

The Nelson/McDougal stable will have only one representative at tomorrow’s Te Aroha meeting with last start winner Raucous heading back there for a $20,000 open hurdle over 3100m. The Nom de Jeu gelding led all the way to win a restricted open hurdle at Te Aroha on June 27.

No Tip, another well performed jumper in the Nelson/McDougal stable, lost his rider at the first fence in a steeplechase at Te Aroha two weeks ago but showed he has taken no harm from that with a fast finishing second in a 2000m jumpout at Hastings last Monday. He has recorded two wins, a second and a third from eight hurdle starts and is likely to revert back to the smaller fences in the $75,000 Wellington Hurdle (3400m) at Trentham next Saturday.

Gee String’s maiden victory at Cambridge on Wednesday of last week provided a number of firsts for his connections.

He was the first runner on the new synthetic track for Woodville trainer Shane Brown and provided Hastings jockey Kate Hercock with her first victory on the surface.

The Niagara three-year-old is raced by a large group of people, many of whom live in Hawke’s Bay, and several of them are first time racehorse owners.

It was a good training feat by Brown to produce Gee String to win fresh up after a five month spell. The horse finished a close second on debut over 1000m at Tauherenikau on January 2 but only managed eighth in his next two starts and was found to be making a breathing noise when galloping at speed.

He was sent to Massey University where an exploratory examination revealed a minor issue but it did not require a wind operation.

With heavy tracks in the central districts Brown decided on a trip north to try Gee String on the synthetic track and the horse drew perfectly at barrier two in a 970m event.

Hercock bounced her mount out quickly and went straight to the lead. She kept him a length in front of the opposition until the home turn and then kicked him clear.

Gee String always had his rivals covered over the final stages and kept up a strong run to the line to win by 1-1/2 lengths.

Gee String is out of the Exploding Prospect mare Gee Baby, who was the winner of five races. She is now deceased but is also the dam of Ballybay (seven wins), Beltoy (two wins) and the one race winners Don’t Blame Buster and Next Dimension.

Gee Baby was part-owned by Taradale accountant Paddy Murphy and he and Gill Bradshaw bred Gee String in partnership, after the latter had taken a liking to the stallion Niagara.

Hawke’s Bay-based Bradshaw is one of the first time owners in the horse, with the others being her 86-year-old mother Barbara Caryl, her daughter Tori Spellar and Paul Murphy, who lives in Perth.

Paddy Murphy and his wife Glenys also have a racing share along with a group from Woodville.

Gee String is now likely to head back to Cambridge for his next start, in a $40,000 Special Conditions Maiden over 970m on July 28. 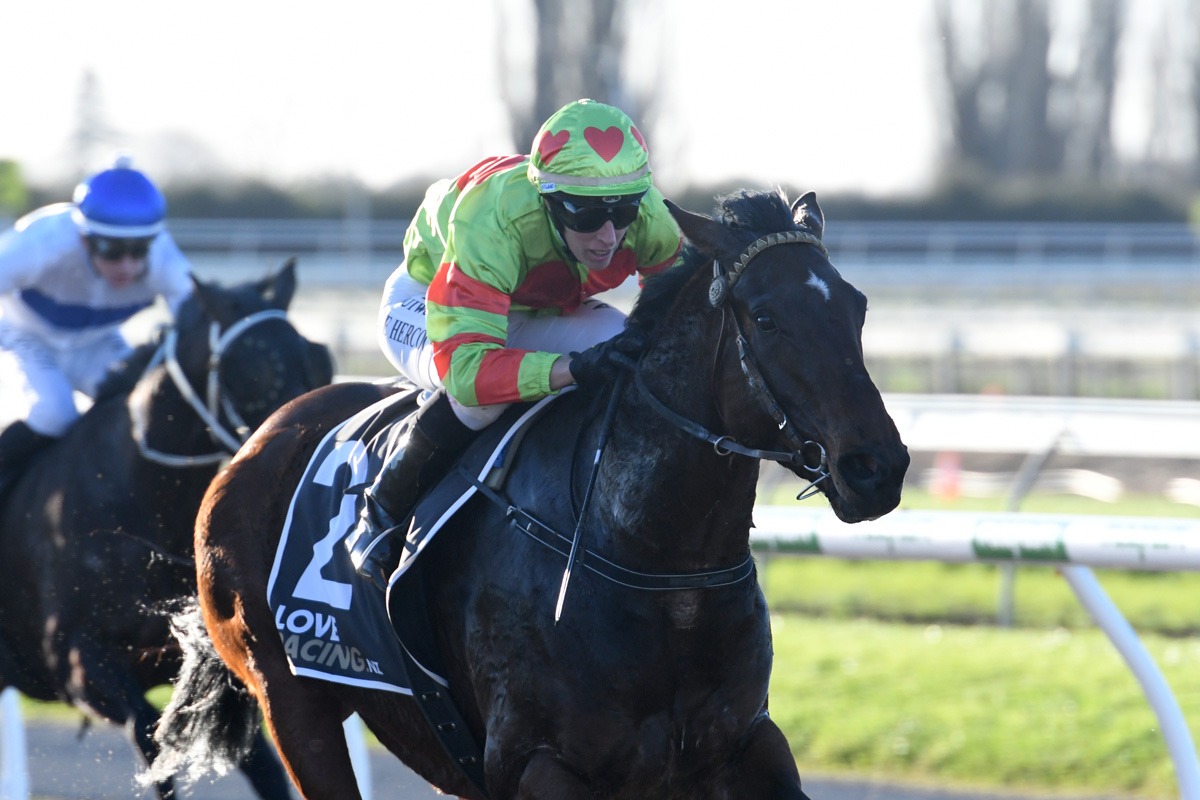 Hastings jockey Kate Hercock keeps the speedy Gee String going as they reach the finish clear of the opposition in a 970m maiden race on the Cambridge synthetic track last week.

O’Malley was contesting the lead aboard Remarx in a maiden hurdle when his mount misjudged the second-last jump and fell.

O’Malley was unconscious for seven minutes but was attended to quickly and whisked away to hospital.

Although he suffered two cracked vertebrae, he didn’t require surgery and was released from hospital the next day.

O’Malley is expected to have more scans next week but has been told he should be riding horses again in six weeks.

Macnab knows how fortunate her partner is through her own experience. In September 2018 she suffered a serious head injury when she fell from Middagurd in a race at Woodville.

New Zealand Thoroughbred Racing will boost stakes by at least 20 per cent for almost all gallop races next season.

An increase of $7million will be allocated to the galloping code for the period from August 28 this year to April 2 next year, meaning $12,000 will be the new minimum stake for races during this period.

“The NZTR Board has created a rolling funding policy across periods of time, as opposed to a full racing season,” chairman Cameron George said.

“This enables the Board to produce increased funding to the industry off the back of good performance. Basically, if the industry, including the TAB, performs well then the industry benefits.”

In addition to stake increases, NZTR’s commitment to free nominations and acceptances, which provides savings of $1.7million to owners, remains in place.

The payment back to 14th place, which was introduced upon the return to racing following last year’s lockdown, has been amended with payment now back to 10th place.

A key feature of the stakes increase policy is the creation of a $500,000 innovation fund for clubs.

“There are lots of good ideas out there and we see this as an opportunity to incentivise innovation by clubs. We encourage them to apply to the fund to further improve their race meeting performance,” George said.

Additionally NZTR has prioritised an infrastructure fund which will promote much needed investment in vital components in the delivery of a safe, marketable and modern racing footprint.

NZTR will also complete further actions over the next 12 months requiring investments in improving the racing product, education, training, welfare, and technology upgrades all which have been under invested in for some time. Funding of $2m has been budgeted for these business-critical issues.

Stakes allocations paying back to 10th: