Hastings owned and trained two-year-old Manhattan Jazz is likely to start next in the Listed $60,000 Ryder Stakes (1200m) at Otaki on July 30 following his strong win over 1100m on his home track last Saturday.

The big Niagara gelding, bred and owned by Chris Russell and prepared by Dean Howard, stunned punters when scoring at odds of 14 to one in the Bonny Glen Landfill Two-year-old (1100m).

He was having his third start after racing greenly in his first two, when finishing last of seven on debut over 1200m at Otaki in May and then a sixth out of 10 over 1100m on the same track last month.

Trainer Dean Howard has always thought Manhattan Jazz had more ability than that, especially after his comfortable length win in a 750m jumpout at Hastings a month ago. But he also thought the big horse needed more ground than 1100m to show his best.

The extremely heavy track conditions at Hastings last Saturday obviously assisted the horse as the race was run in 1:12.73, which is normally a time for 1200m in the winter.

Manhattan Jazz was awkwardly away and second last in the early running. Rider Kate Hercock started to urge him along entering the last 600m but there was little response for a start and the horse was still giving the leaders a big start on the home turn.

Hercock brought her mount to the outside of the track and he gradually started to pick up speed before sweeping past the leading division in the last 50 metres to win by 1-1/4 lengths.

It was the second of two wins on the day for Hawke’s Bay-based  Kate Hercock, who also took out the opening event on Call Me Jack.

Manhattan Jazz is owned by his Hastings breeder Chris Russell, who was unfortunately unable to be on track to celebrate the win as he was isolating at home recovering from Covid.

“I was really disappointed I wasn’t there to see him run but I was really happy with the win,” Russell said this week.

“When this race meeting was transferred from Awapuni to Hastings a few weeks ago I said to Dean it would be an ideal race for the horse, given that it was worth $30,000 and on his home track.

“He thought the distance was a bit short but the track was that heavy that it was probably like a 1200-metre race.”

Russell bred Manhattan Jazz out of the Sakhee’s Secret mare Sakhee Jazz, who was out of the two-race winner Donna Jazz.

Sakhee Jazz was injured as a young horse and never raced but she is a half-sister to Shesalljazz, who is the dam of the eight race winner New York Jazz. It is also the family of No Time To Jazz (three wins).

Manhattan Jazz was the first foal out of Sakhee Jazz but Russell now has a weanling filly out of the mare by O’Reilly’s Choice, a stallion he stands at stud in Hawke’s Bay.

Upset win by Call Me Jack

It is almost two years since Hastings owned and trained Call Me Jack last won a race and, for most of the $35,000 Open 2200m race at Hastings last Saturday, it looked like that winless run was going to continue.

The six-year-old Jakkalberry gelding looked a forlorn chance of even paying a dividend when he was a distant fourth and under a hard ride from jockey Kate Hercock with 600m to run.

Whether the three horses in front started to tire or he got a second wind is debatable but Call Me Jack seemed to quickly join the three leaders early in the home straight and kept up a sustained finish down centre track to win by 2-1/4 lengths, at odds of 26 to one.

It was Call Me Jack’s third win from 24 starts and all three have been on heavy tracks.

Being a Rating 65 rated horse he wasn’t supposed to have contested the open handicap last Saturday but was balloted out of the Rating 65 race over 1650m.

His Hastings trainer and co-owner Tim Symes maintains that the horse needs a wet and slushy track to show his best but the fact that he seems to cope with the heaviest of track conditions obviously contributed to last Saturday’s win.

Jockey Kate Hercock said later that Call Me Jack was clearly under pressure a long way from the finish but she persisted in riding the horse right out and got the desired result.

“It was the heaviest Hastings track I’ve ever ridden on, and it was hard going for all of them,” she said.

“I had some riders say I don’t know how you can keep pushing them, but I said “they keep going, so I can’t stop and I just keep riding them, and sometimes they keep going well enough that they can run a place or even win.”

Call Me Jack is raced by Tim Symes and his son Wilfred and they bred him out of the Stark South mare Gizakis, who was unplaced from four starts but was out of the two-race winner Love Proposal. 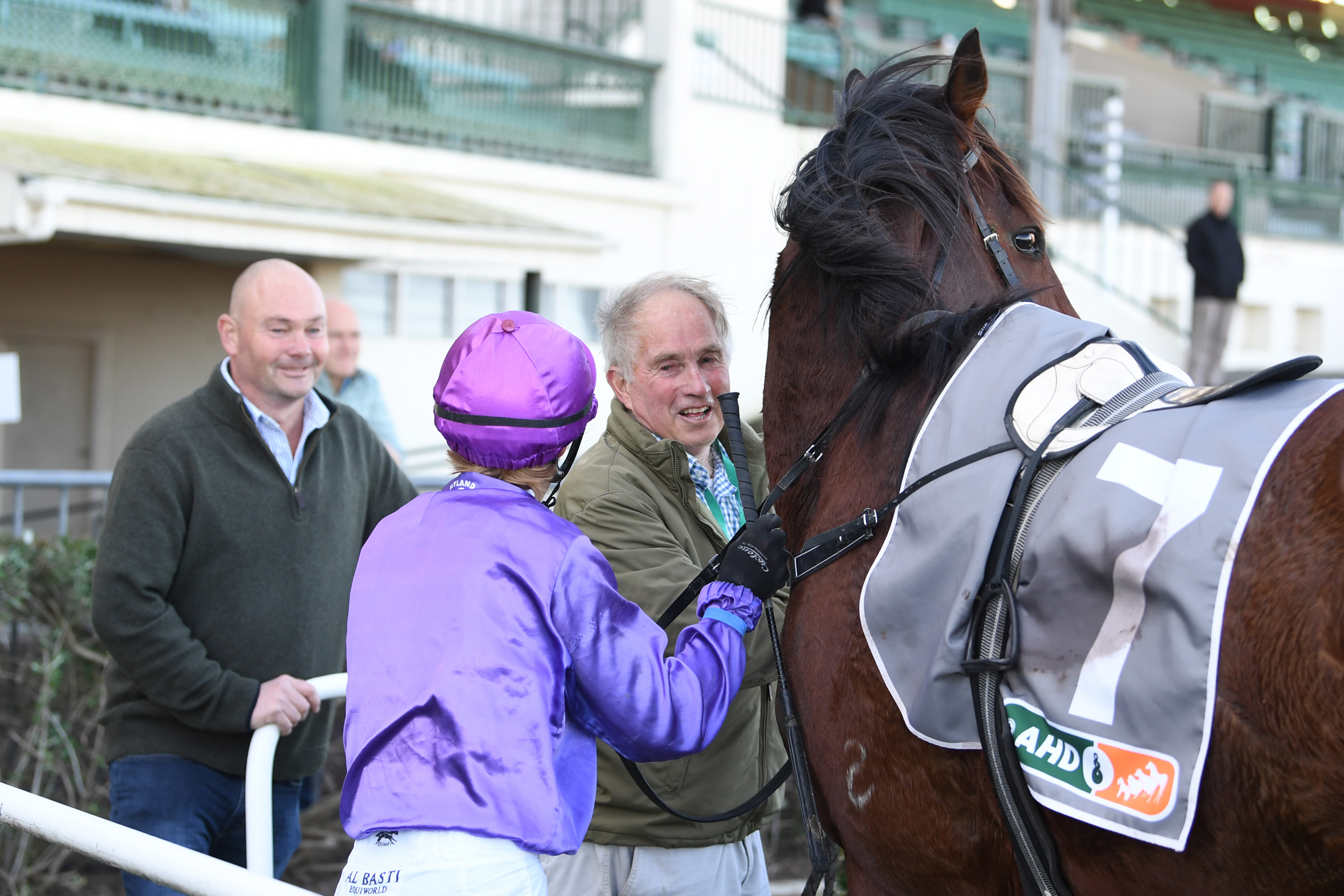 It was the mare’s third success from 16 starts, with her two previous wins being at Otaki.

For Robson, who has raced horses for several years, the win was especially significant as his two daughters, Lisa and Charon, also have a racing share in Hot Shockolate and the latter arrived back from Australia on Tuesday of last week.

“It is the first time we’ve actually got to see her win,” Robson said.

“Covid meant we weren’t able to see her race for a while and then there were three cancelled meetings that she was supposed to start at.”

Hot Shockolate is trained by New Plymouth-based Bryce Revell, who also has a racing share in the mare. Others in the syndicate are Bryan Godber and Linda Hanley from Taradale, Kelvin Bland (Waipukurau) and Roger McDonald (New Plymouth).

They race the four-year-old daughter of Shocking on lease and recently negotiated a 12 month extension on it.

“Bryce thinks a lot of her and she’s starting to settle a lot better in her races now,” Robson said.

“She used to go too hard for her own good but Bryce has got her to settle and the addition of blinkers helped.”

She settled the mare midfield in the early running before improving between horses coming to the home turn.

Once in the straight Hot Shockolate finished strongly, under a hands and heels ride, to win by 1-1/4 lengths.

Hawke’s Bay-owned Waihaha Falls produced one of the most impressive performances in Australasia last Saturday, outclassing his opposition in the $A150,000 Bowermans Handicap (1200m) at Randwick.

Trained by John O’Shea, Waihaha Falls is owned by Hastings couple Guy and Brigid Lowry along with Mark Chittick from Waikato Stud.

They bred the Sacred Falls four-year-old out of the Scaredee Cat mare Mink and he has now won them four races from only nine starts and $A255,300 in stakes.

Patiently ridden by apprentice Reece Jones, Waihaha Falls settled well back in the early running last Saturday before beginning to advance purposefully out of the pack as the field approached the home turn.

Jones released the brakes in the straight and the race was all over in a matter of a few strides, Waihaha Falls bounding clear for a 4-3/4 length victory.

Mink, the dam of Waihaha Falls, was a winner from the Guy Lowry and Grant Cullen stable in Hastings before crossing the Tasman to join the Sydney stable of John O’Shea. She collected another two wins and also finished fourth in the Listed Civic Stakes (1400m) at Rosehill in 2012.

Mink is the dam of two winners from three foals to race, with Waihaha Falls’ half-brother Golden Key a five-time winner in Australia and Macau.

Melbourne-based jockey Mick Dee made a winning return to his homeland on Wednesday when he rode Calvaria to victory in a 1550-metre maiden race at Cambridge for a syndicate that includes his Hawke’s Bay parents Richard and Jo Dee.

Dee is back in New Zealand to visit friends and family and took the opportunity to get in the saddle to ride for his parents. He was aboard Calvaria when she finished third on debut over 1300m at Cambridge a fortnight earlier and the Tavistock filly obviously appreciated the extra distance on Wednesday.

“It was great getting the win, especially for my parents,” Dee said. “They own the horse, so they are the reason why I am here riding her.”

Calvaria, who is trained by Shaun Ritchie and Colm Murray at Cambridge, is the only horse Dee has partnered since he has been back in New Zealand. His priority has been spending time with his family at their farm in Hawke’s Bay, which he shares in the ownership with his parents.

“It has been great being back home for a month to see the family and have a bit of a holiday,” he said.