Havelock North-based Jason Fleming, a former chief executive of Hawke’s Bay Racing, has been appointed to the newly established TAB New Zealand Board.

Racing Minister Grant Robertson announced the first members of the board this week, saying it will progress from the excellent work done by the interim board, put in place in August last year.

“The TAB Board was created under the Racing Act in 2020. The Act outlines a process for appointing the board through the establishment of a selection panel to make recommendations to the Minister of Racing,” Robertson said.

“This includes three people nominated by the racing codes and up to four other members who have a range of knowledge and experience outlined in the Act.

“The selection panel has taken particular care to work thoroughly through the process to identify suitable candidates. I thank them for their work.”

The Board will commence on August 1 and has been appointed for a term of three years, ending July 31, 2024.

A memorial service for Hall of Fame trainer Laurie Laxon, who passed away late last week at his Whitianga home, will be held at a yet to be finalised date.

The decision by Laxon’s family will enable many who could not be immediately present to come together and remember his outstanding contribution to racing both in New Zealand and internationally.

Laurie Laxon’s list of achievements included a Melbourne Cup victory and multiple Singapore training premierships and was also a highly successful trainer in New Zealand. He had lived in retirement in the Coromandel since returning from Singapore in 2017, the year after his induction to the New Zealand Racing Hall of Fame.

He had ruled supreme in Singapore training ranks after relocating there in 1999, claiming nine premierships and becoming the first to win 1000 races in a season, and the first (and still only) trainer to reach 1000 wins at Kranji on the way to a full tally in excess of 1250.

Laxon was born into racing as a member of a family involved since New Zealand’s earliest European settlement years. As a teenager he became an amateur rider and, in his final raceday ride, he won the Duke of Gloucester Cup. His older brother Ted also went on to become a successful owner-trainer based in Hastings.

After completing a carpentry apprenticeship, Laurie Laxon was drawn fully into racing when he established a stable near Ngaruawahia. From there he first made his mark with the 1974 Great Northern Hurdle winner Cobland, who he owned with his late wife Jenny, before establishing his credentials as the trainer of major flat performers.

A big part of that early success was the association Laxon built with the brothers Philip and Peter Vela, leading to their first Group 1 success with the Sir Tristram filly Noble Heights in the 1981 New Zealand 1000 Guineas.

Sir Tristram was also the source of the Laxon-trained, Vela-owned and bred Romanee Conti, winner of the 1993 Hong Kong International Cup. She was also the dam of Ethereal, who was trained by Laxon’s second wife Sheila to win the 2001 Caulfield and Melbourne Cups.

Sir Tristram also sired the Vela-owned and bred Riverina Charm, a four-time Group 1 winner on both sides of the Tasman under Laxon’s training while he also prepared the giant Sir Tristram mare Empire Rose to win the 1988 Melbourne Cup for her owner-breeder Fred Bodle.

“Laurie was an outstanding trainer and horseman who was particularly skilled with fillies and mares,” commented his close friend and neighbour, New Zealand Bloodstock chairman Joe Walls.

“When Laurie went to Singapore he remained staunchly loyal to the New Zealand-bred and much of his success there was down to the horses he sourced from New Zealand,” added Walls.

Another to pay tribute to Laxon was highly respected former trainer Bruce Marsh, who developed a close friendship as a fellow Kiwi expat in Singapore.

“Laurie was the instigator of me going up to Singapore,” said Marsh, who is now retired in Cambridge. “He was an immense help to every New Zealand and Australian expat who went up there—myself, Mark Walker, Cliffy Brown, Michael Freedman, all of us.

“He went out of his way to show us the ins and outs, and he was always there if you needed any help.

“Obviously Laurie was a top-notch trainer, he will always be remembered for his huge success back home, in Australia and up in Singapore.”

As a New Zealand licence holder for close to 50 years Laxon also played a significant role through his involvement with the NZ Trainers’ Association, serving as National President prior to heading to Singapore.

Laxon is survived by his sons Craig, Roger and John, and daughter Lucy. 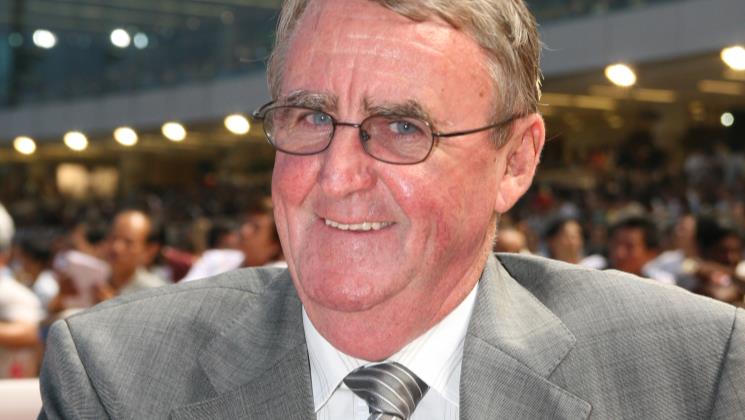 Trainer Tony Pike is looking forward to spring racing with his new acquisition Catalyst, with the star galloper likely to be seen in action at the Hawke’s Bay spring carnival.

The rising five-year-old son of Darci Brahma won six of his 10 races for former trainer Clayton Chipperfield, five of which were at stakes level, including the Group 1 New Zealand 2000 Guineas (1600m).

He hasn’t raced since pulling up lame in the Group 2 The Shorts (1100m) at Randwick in September last year, with owner Dick Karreman and his racing manager Rick Williams electing to take a cautious approach with his return.

Catalyst joined Pike’s barn a couple of months ago and the Cambridge trainer has been pleased with what he has seen from the gelding so far.

“He has had a little break since he had an issue at the tail end of his last preparation, but he seems to be back to his best and hopefully he holds together for us heading into the spring,” Pike said.

“We have only had him a couple of months now, but going through his form, 1400m up to a mile is going to be ideal for him.

“He is quite a brilliant horse with a lovely action and he settles pretty well in his races.”

Catalyst’s initial spring targets will be in New Zealand, with Pike eyeing some Australian assignments if he comes up well enough.

“He is going to have a barrier trial here on August 3,” Pike said. “He will trial again on August 17 and is likely to have two runs in New Zealand, in the Foxbridge Plate (Group 2, 1200m) and the Tarzino Trophy, the 1400m Group 1 event at Hastings on September 11.

“If we think we have him back to his best there are two options for him, one is Sydney or else there are a couple of nice races in Melbourne, like the Group 1 Toorak (1600m). 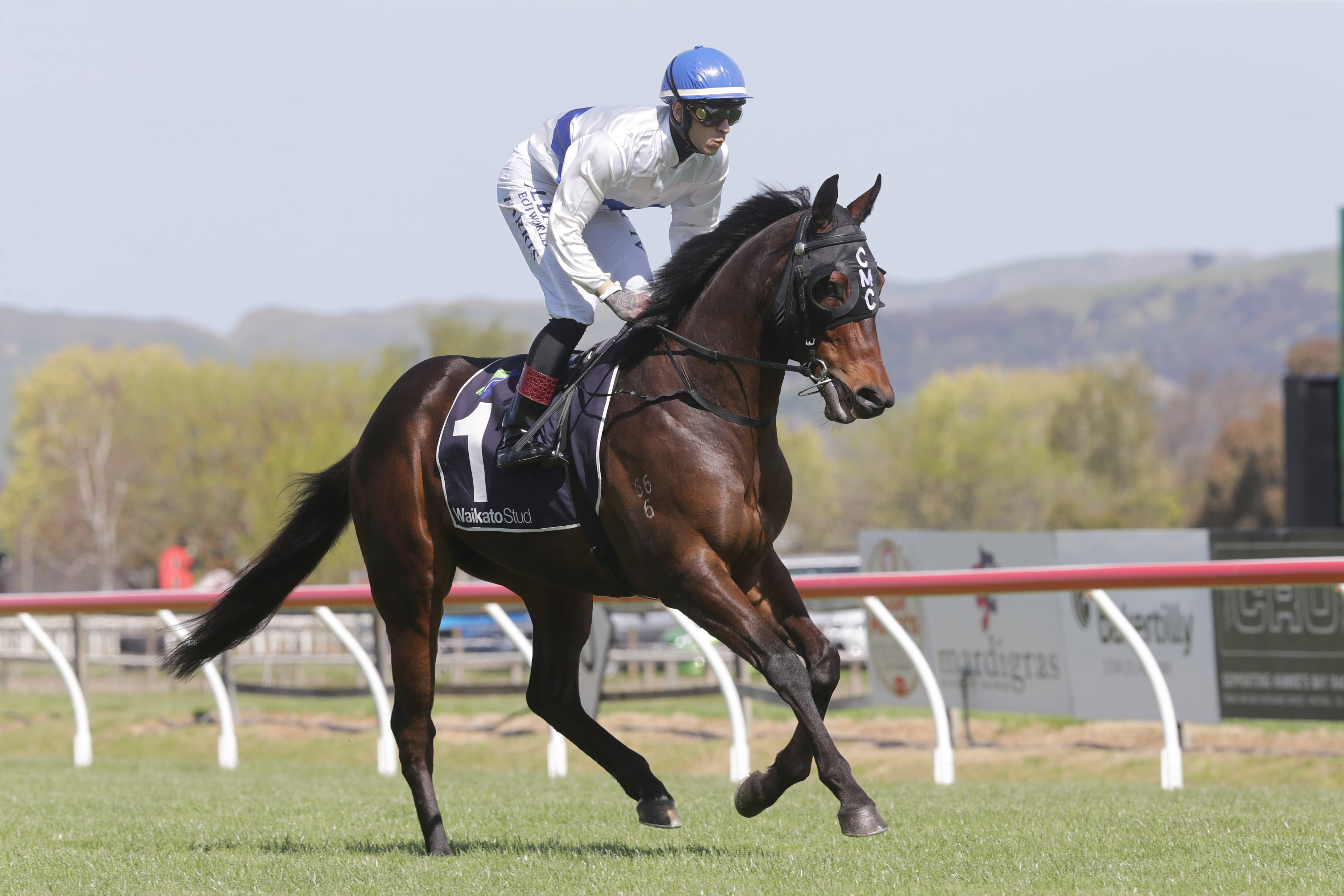 Catalyst is being aimed at the Group 1 $220,000 Tarzino Trophy (1400m) on the first day of this year’s Hawke’s Bay Spring Carnival

The Good Fight packs a punch

Expat New Zealand trainer Mike Moroney is pleased with the way The Good Fight has come through his winning run in last Saturday’s Flemington Cup 2800m) in Melbourne.

“He is a really good, he is a lovely horse,” Moroney said. “I have trained a lot of High Chaparrals, they are all pretty quirky, but this bloke is really straight forward.

“He is out of a Zabeel mare (Pravda) as well, and I know she was quirky because she held up the Melbourne Cup the year Brew won it.”

“This guy is very straightforward, you wouldn’t know you had him in work. He does everything perfectly—he eats, he sleeps, he works, and that’s him”

The Good Fight was purchased out of Rich Hill Stud’s 2016 New Zealand Bloodstock Premier yearling sale draft for $300,000 by trainer Shaune Ritchie, for whom he recorded a minor placing in the Group 3 Wellington Cup (3200m) last year and won the Group 3 Rotorua Cup (2200m) before heading to Australia.

The six-year-old has now recorded five wins from only 32 starts and is could now be aimed at some of the major Victorian cup races in the spring.