Raucous, a horse that was once described as having legs that were going faster than his brain, finally put it all together with a decisive, albeit lucky, jumping win at Te Aroha last Sunday.

The Nom de Jeu gelding brought up his first victory from 14 starts when he led all the way in the 3100m restricted hurdle event, scoring by an ever widening 14-1/2 lengths at the line.

But his supporters were given heart palpitations when he almost fell at the third to last fence.

Raucous had been jumping superbly in front and was going that well, when four lengths clear coming to the home bend, that rider Dean Parker had a big confident look behind to see where the opposition was.

At that stage Raucous only had to negotiate the three fences in the home straight and victory was assured. But he got in too close to the third to last and ploughed through the top of it, dipping badly on landing.

Parker was lucky to stay aboard and the mistake cost the horse valuable momentum. But he was able to pick himself up and, although he only scrambled over the last two obstacles, he still proved superior to his rivals.

Raucous, trained at Hastings by the partnership of Paul Nelson and Corrina McDougal, was having his fifth hurdle start and had recorded a second, two fourths and a fifth in his previous four attempts.

The seven-year-old was bred by Hawke’s Bay Racing Board member and long-time thoroughbred owner-breeder Ken Browne, who races him in partnership with Paul Nelson along with former trainer Jeanann Hercock and her sister Rose Sellwood. All four live in Hawke’s Bay.

Raucous started out in the stable of Jeanann Hercock’s daughter Kate, who always knew the horse had ability but had trouble trying to get him to conserve all his nervous energy and settle down to be a racehorse.

“Kate told me one day he’s got it there but his legs are going faster than his brain,” Ken Browne recalled.

It was Hercock’s suggestion that the horse be transferred to the Nelson/McDougal stable to be tried as a jumper, hoping that would help settle him down.

He has now had 11 starts from his new base for a win, three seconds, a third and two fourths.

“He’s always had the ability but has just taken a while to get there,” Browne said this week.

“I wasn’t going to try him as a jumper but Kate took him up to Paul’s place and he started to show a bit of promise so we decided to carry on and I think he might even be a better steeplechaser than a hurdler in time.

“I don’t think he beat too much last Sunday but a win is a win and they are always hard to come by.”

Ken Browne, who is a stock agent, bred Raucous out of the Star Way mare Dizzie Limit after he bought her off the late Doug Ancell, a prominent owner-breeder in the north.

“I used to sell a lot of cattle to Doug and we became good friends,” Browne said.

“He had a great breed that went back to Coverless and Limitless and when he got sick and wanted to wind down he offered me the choice of a couple of mares and that is how I got Dizzie Limit.”

The other mare in the same paddock was Nothing Less, who was also by Star Way, and she was taken up by Brent and Cherry Taylor of Trelawney Stud.

“Nothing Less was the mare that I really wanted but the Taylors had already picked her out,” Browne said.

Dizzie Limit, who is now deceased, never raced after suffering a tendon injury and has not been that successful as a broodmare either. Raucous was the last of six foals she produced with King Dan and Kininmont being the only other winners out of the mare. They both each recorded a win and two seconds from limited racing careers.

Browne said he hadn’t discussed with Nelson where Raucous will start next but there is an open hurdle back at Te Aroha on July 11 that could be on the agenda.

Several Hawke’s Bay people celebrated their first success as racehorse owners when Hot Shockolate broke through for a maiden win over 1200m at Otaki on Friday of last week.

The three-year-old filly, trained at New Plymouth by Bryce Revell, was having her third start and the victory followed two third placings over 1400m, the first at Trentham on May 13 and the second on her home track on June 10.

Hot Shockolate is raced on lease from Rich Hill Stud by an eight-member group that includes the filly’s trainer and his next door neighbour Roger McDonald.

Taradale’s Ken Robson, who has been a long-time supporter of the Revell stable, also has a share along with his daughters Charon and Lisa. The other three involved are Linda Hanley, Bryan Godber and Kelvin Bland, who all live in Hawke’s Bay.

“My daughter Charon lives in Australia but is back home for six weeks,” a delighted Ken Robson said this week.

Hot Shockolate won by half a length and for a time it looked like her connections were going to have to settle for another minor placing as she fought out three-way finish with Bold Star and Thatz Daisy. But top apprentice Hazel Schofer managed to get the filly to lift to another gear in the final 50m and she surged to the front just short of the line.

It was Schofer’s 72nd win of the season and she looks set to claim the Apprentice Premiership title as her nearest rival, Kozzi Asano, was on 61 wins going into yesterday’s Otago meeting at Wingatui.

Hot Shockolate is by Shocking out of the Bertolini mare Shahbab, who was the winner of six races and stakes placed.

Ken Robson is also a shareholder in the Bryce Revell-trained Secret Squirrel, who has won three races to date. 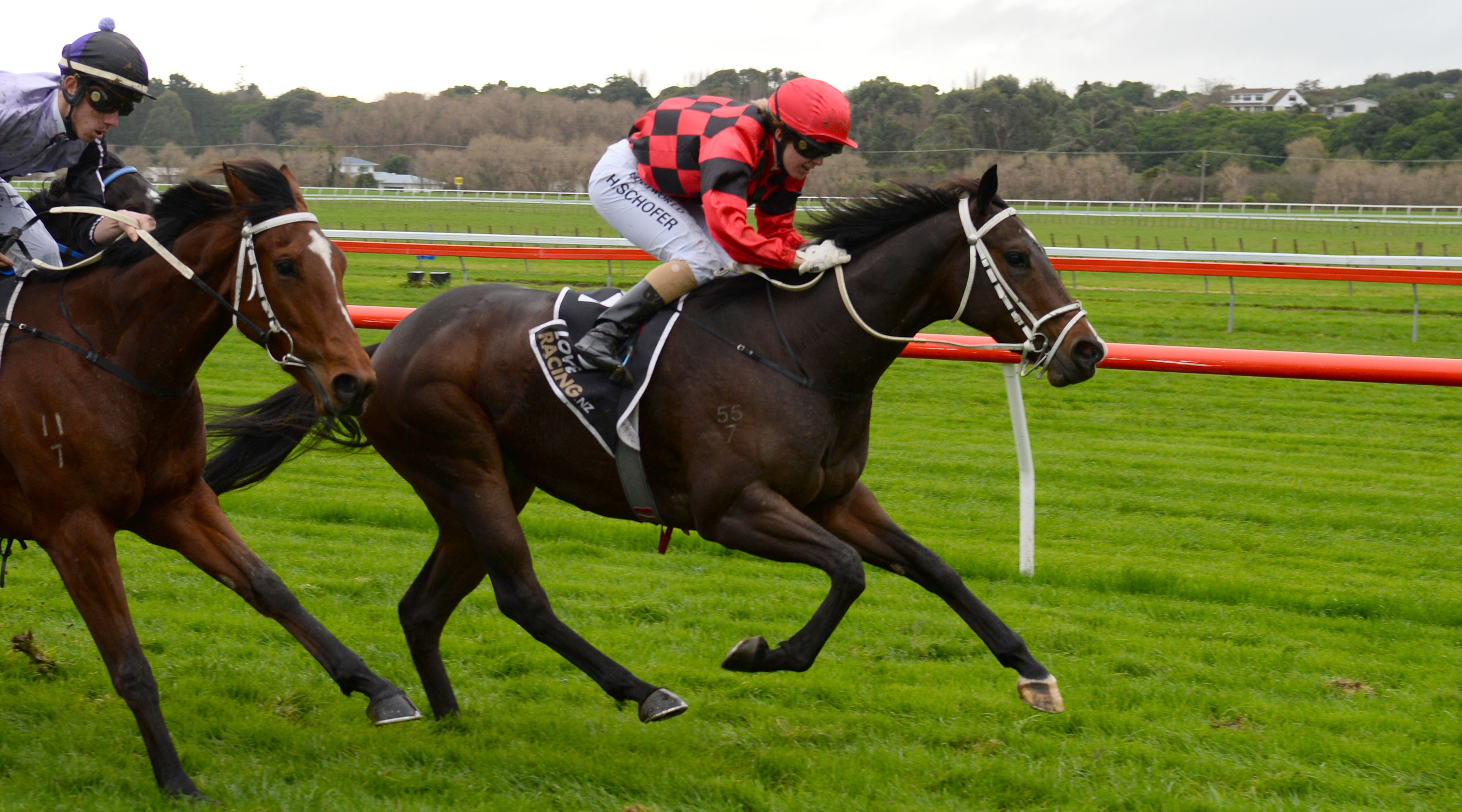 Top apprentice jockey Hazel Schofer gets the best out of Hot Shockolate to take out a 1200m maiden race at Otaki on Friday of last week. It was the first racing success for several Hawke’s Bay owners.

Jumping races will make up half of the 10-race card at today’s Hawke’s Bay meeting.

Such were the nominations for the maiden hurdle event that it was decided to split it into two races. They will be races one and two with one of the features, the $50,000 Te Whangai Romney Hawke’s Bay Hurdle, being race three.

The first race is timed for 10.54am with the last at 3.54pm. There will be a $10 admission charge with 100 per cent of all gate takings being donated to the Ellie Stokes Trust.

The Hawke’s Bay/Poverty Bay Thoroughbred Breeders’ annual weanling walk will be held tomorrow with four properties to be visited.

There will be as many as 16 weanlings on show and they are by such high profile stallions as Almanzor, Contributer, Embellish, Time Test, Ace High, Santono Aladdin, Preferment and O’Reilly’s Choice.

The weanling walk will commence at 10am at Guy Lowry’s Okawa property, 305 Kawera Road, and will end at the Hastings racecourse where the Hawke’s Bay-based stallions Sneaking To Win and Mongolian Falcon will also be paraded.

Last season’s New Zealand Bloodstock Filly of the Year Jennifer Eccles will be auctioned via the online platform Gavelhouse later this month.

The winner of four of her 14 starts and placed on a further six occasions, Jennifer Eccles was a dominant winner of last year’s Group 1 $400,000 New Zealand Oaks (2400m) at Trentham. That victory followed three Group 2 triumphs, in the Eight Carat Classic (1600m) at Ellerslie, the David & Karen Ellis Fillies’ Classic (2000m) at Te Rapa and Lowland Stakes (2100m) at Hastings.

Jennifer Eccles was also runner-up in the Group 1 New Zealand 1000 Guineas (1600m) at Riccarton and was a close-up fourth in the Group 1 Tarzino Trophy (1400m) at Hastings last spring.

Clark then set up the Challenge No. 10 Syndicate that now owns the mare with four of the members being Napier couple Brian and Lorraine Henneker and Taupo-based Allan and Judy Payne.

Clark said Jennifer Eccles has had some niggly issues as a four-year-old and so it was decided, in the best interests of the horse and the big syndicate that owns her, that she be offered for sale.

Trained throughout her career by Shaune Ritchie and Colm Murray from their Cambridge base, Jennifer Eccles is being prepared for buyer scrutiny by Adrian Stanley and Hannah Kettlety of Woburn Farm, near Cambridge.

By outstanding miler Rip Van Winkle, a son of Galileo, Jennifer Eccles is out of the stakes-placed Elnadim mare Platinum Elle, who is out of the Zabeel mare Lady Tee.