Estefania’s impressive win in the Rating 65 race at Hastings on Thursday of last week provided her Hastings co-trainer Jordan Bassett with an extra-special celebration.

Not only was it Bassett’s first official win as a trainer but it came with the horse that she rode to win two races when she was a jockey.

Bassett, 31, was an apprentice jockey for six years and kicked home six winners before deciding on a change of career and joined her partner Richard McKenzie in a training partnership about a month ago.

The pair have seven horses on their books at the moment, with Estefania the obvious star. The seven-year-old Darci Brahma mare chalked up her fourth win from 38 starts when she raced away for a five length victory over 1200m at last week’s Hawke’s Bay meeting.

Estefania is out of the Success Express mare Zino Belle and has been the foundation horse in the McKenzie/Bassett stable.

“Rich bought the mare in-foal to Darci Brahma and we have brought her (Estefania) up from a foal to breaking her in and then getting her to the races,” Bassett said this week.

“And also as it was at Hastings where we are based.”

As a jockey Bassett recorded her first win aboard the Kevin Myers-trained Kiddo at Rotorua in September 2016. At that stage she was apprenticed to the Hastings partnership of Guy Lowry and Grant Cullen and also spent a three week stint working at the Myers Wanganui stable.

She rode Estefania to her maiden victory over 1400m at Rotorua in April 2018 and also when the mare recorded her second victory over 1600m at Otaki in July 2019.

Estefania excels on rain affected tracks so the extremely heavy footing at Hastings last week was made to order for the seven-year-old. She was caught three and four wide in the early stages of the race but apprentice jockey Elen Nicholas decided to push and they were near the outside fence rounding the home turn.

Nicholas angled back inside one runner and then only had to keep the mare going with a hands and heels ride over the final stages as she surged clear of her rivals.

Estefania was having her first start for two months, with Bassett saying the horse pulled a muscle when finishing near the tail of the field over 1600m at Trentham in May and it has taken time to get her 100 per cent fit again.

“When she is right and finds a track she likes she can be very hard to beat,” Bassett said.

“We actually thought the 1200 metres might be a bit too short but, with the way the track was, she went really super.”

Estefania is one of seven horses Bassett and McKenzie have in their care, the others including the multiple placegetter Free Thyme.

Erebus could climb to heights

Erebus, a horse that cost just $1000 to buy on the Gavelhouse auction site, had four Hawke’s Bay women rejoicing when he powered to victory in a 1200m maiden race at Hastings on Thursday of last week.

The big Zacinto four-year-old was ridden to success by in-form jockey Kate Hercock, who trains the horse from her Otane property and races him in partnership with her mother Jeanann Hercock, her aunty Rose Sellwood and her stable employee Brooke Millar.

For Millar it is the first horse she has had a share in while the other three have raced horses together for more than 20 years, including the winners Avgenia and Davey Crockett.

“Davey Crockett was a horse we had a lot of fun with and we decided to form a syndicate between the three of us to race him and called it Crockett Syndicate,” Jeanann Hercock recalled this week.

“We’ve raced others since and now this one.”

Erebus was bred by Kevin Hickman at his Valachi Downs Stud and offered for sale on Gavelhouse in February last year.

The Crockett Syndicate had been involved with another son of Zacinto and liked the breed so decided to put in a bid.

“Kate said when he was going so cheap that he was a horse that had a few attitude problems but I told her we could probably iron those out in time or else give him away,” Hercock added.

Being so big, the horse was nicknamed “The Bus” when he arrived at Hercock’s property and so when it came to officially name him they decided on Erebus, after the South Island mountain that claimed Air New Zealand Flight 901 in November 1979.

Erebus was having just his second start when he lined up at Hastings, after beating only one home over 1200m at Woodville in September last year.

“He’s just been a big horse that has taken time,” Jeanann Hercock said.

“He had a couple of trials where he showed a bit but we have just had to wait for him to mature.”

Erebus drew wide in last week’s 1200m race and Hercock let him find his feet in in the first 500m before sending him on a forward run around the field. The big gelding improved quickly to be in a challenging position coming to the home turn and Hercock took him to the extreme outside to mount his run.

Erebus kept increasing his momentum and finally surged clear in the final stages to win by 1-1/4 lengths.

The horse is certainly bred to succeed as his dam Paris Hilton was the winner of five races and has also left Vaporetto (four wins), The Heiress (three wins), Los Cabos (two wins) and the one-race winners Florence Hilton and Rosaeflora. 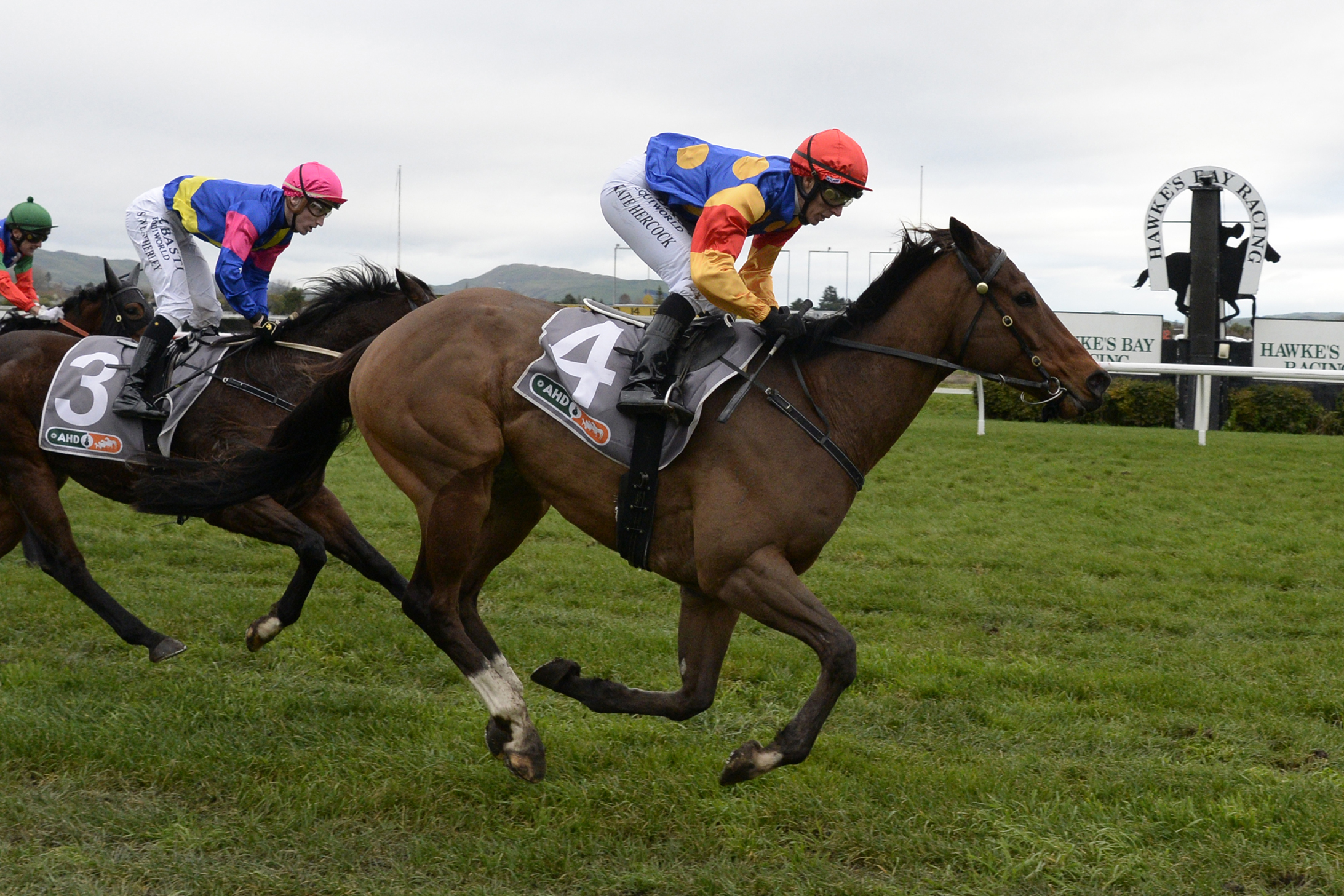 Erebus and trainer-jockey Kate Hercock cross the line for a decisive win in a maiden 1200m race at Hastings last week.

The aptly-named Hastings-trained mare She’s So Reliable added to her stakemoney tally with another deserved win in the Rating 65 race over 2200m at last week’s Hawke’s Bay meeting.

The Reliable Man four-year-old, prepared by John Bary, was having her 15th start and now boasts a record of two wins, four seconds, a third and a fourth for stakes of $27,440.

“She’s certainly living up to her name as she doesn’t know how to run a bad race,” Bary’s racing manager Mike Sanders said.

She’s So Reliable won her maiden race over 1550m at Awapuni in April by a length and scored by the same margin on her home track, with Lisa Allpress being the successful rider on both occasions.

Allpress made the most of the mare’s handy draw to settle her in a perfect trail just in behind the leaders and then angled her out wide to lodge a challenge rounding the home bend.

She’s So Reliable and Red ‘N’ Surf settled down to fight out the finish, in a slog to the line, with the former edging clear in the final stages.

She’s So Reliable is owned by Auckland couple Andy and Celeste Hauraki and was a $40,000 purchase from the 2019 Karaka yearling sales.

She is out of the Zabeel mare Capacity and a half-sister to the five race winner Single Minded.

Hawke’s Bay racing identity John Frizzell has always been a fan of jumping horses and he shares in the ownership of two of the country’s stars at the moment in The Cossack and this month’s upset Wellington Steeplechase winner Tittletattle.

Frizzell races The Cossack with close friend Peter Grieve and his son Doug, along with the horse’s Hastings co-trainer Paul Nelson.

The Mastercraftsman eight-year-old is the winner of 13 races including a virtual clean sweep of the country’s feature hurdle races, the Great Northern (twice), Grand National, K S Browne, Waikato, Wellington and the Hawke’s Bay Hurdle earlier this month.

The reigning New Zealand champion jumper was flown to Melbourne on Tuesday and will now be aimed at the Australian Grand National Hurdle-Steeple double, with the first of those two races to be run at Sandown on August 7.

Frizzell and his late wife Jan bred Tittletattle, who was recording her first win from 32 starts when taking out the $75,000 Wellington Steeplechase (5500m) by 17 lengths, at odds of 21 to one.

The nine-year-old is by Faltaat out of the His Royal Highness mare Regal Swift and descends from a family that the Frizzells have enjoyed good success from.

Regal Swift won three races and was a daughter of another useful mare they raced in Indian Swift, who won six times.

Tittletattle was originally put into work with Te Rapa trainer David Greene but showed very little dash on the flat so she was sent home to the Frizzell’s farm.

Frizzell said he needed to have Tittletattle out of his sight to resist the temptation to breed from her so he sent her to Marton trainer Dean Cunningham to be tried as a jumper.

Cunningham started working the mare and told Frizzell she was a good jumper so the latter decided to take a share in the Chase A Fox Syndicate, a group of jumping enthusiasts who now race her.

Although Tittletattle was recording her first win she had been placed six times before that, three over hurdles and three in steeplechases.