The Cossack provided his Hawke’s Bay part-owner Peter Grieve with the perfect tonic when the Hastings-trained jumper scored a dominant win in the $75,000 Hydra-Cell Pumps Wellington Hurdle at Hastings on Thursday of last week.

Grieve, a regular attender at Hastings race days, unfortunately had to miss the last Hawke’s Bay meeting of the season. Instead he was home recuperating from a severe throat infection that had seen him hospitalized for a couple of days.

John Frizzell, another part-owner in The Cossack and good friend of Grieve, said in his presentation speech that it was a tremendous thrill to win such a prestigious race but it was also sad that his good mate couldn’t be there to share in the celebrations.

Grieve’s son Doug, who is also a shareholder in The Cossack, was on course along with the horse’s other owner and co-trainer Paul Nelson.

The Wellington Hurdle was supposed to be run at Trentham the previous Saturday but, when that Wellington meeting had to be abandoned, both that race and the Grant Plumbing Wellington Steeplechase were transferred to Hastings.

The Cossack’s win last week was also compensation for his connections after the horse was forced to miss the $50,000 Hawke’s Bay Hurdle earlier this month due to a minor blood disorder.

The Mastercraftsman seven-year-old was having his 10th start over hurdles and now boasts a record of five wins, three seconds, a third and a fourth. He is also the winner of two races on the flat but his biggest success came in last year’s $125,000 Great Northern Hurdle (4190m) at Ellerslie.

Nelson, who trains The Cossack in partnership with Corrina McDougal, said the horse was a bit too head-strong when he first started jumping but he was delighted with the way he settled in last week’s 3100m feature.

Jockey Shaun Phelan allowed The Cossack to flop out of the starting gates and managed to restrain him back in the rear division in the early stages. He then bided his time, in a strongly run race, until the last 1000m before asking his mount to improve.

The Cossack was still only ninth at the 600m but so quick was his acceleration that he was up to second with two fences to jump.

Tallyho Twinkletoe had a clear lead at that stage but The Cossack was still winding up the pair jumped the last hurdle on terms before The Cossack surged clear in the run to the line to score by 1-1/2 lengths. There was three-quarters of a length back to third placed Aigne.

Nelson said he was unsure where The Cossack will start next but there is a good chance he could head south for the $75,000 Grand National Hurdle (4200m) at Riccarton on August 11.

Peter Grieve’s brother Ivan bred The Cossack and originally raced him in partnership with Hastings trainer John Bary, who prepared him for his two flat wins and also trained him for his first three hurdle starts for two seconds and a fourth.

Upon hearing there was a chance The Cossack could be sold overseas Peter Grieve decided to buy the horse and brought in his son Doug, Frizzell and Nelson as shareholders to race him.

Three races after The Cossack’s hurdle triumph they saddled up Shackelton’s Edge for the Wellington Steeplechase and the seven-year-old went down by the barest of margins when second to Yardarm.

The 5500m race proved to be a battle of attrition, with only three of the seven starters finishing the race.

Shackelton’s Edge turned for home with a length advantage over race-favourite Yardarm and the pair then settled down to a neck to neck duel down the home straight, with neither horse giving an inch as they slogged their way to the line. The photo-finish print gave the decision to Yardarm by a nose.

A course of treatment to remedy stomach ulcers and the addition of a tongue-tie brought about a form reversal by Hastings-trained Countess Conti on her home track last week.

The Prince Conti mare, prepared by the partnership of Guy Lowry and Grant Cullen, was having her fourth start when she lined up in a maiden 1650m race at the Hawke’s Bay meeting and had not finished better than 10th in her three previous outings.

Hawke’s Bay owner Graeme Wedd, who bred the four-year-old, said she was found to be suffering from stomach ulcers which was no doubt affecting her performances. She was treated with a special formula to fix the problem and the mare showed a glimpse of her true ability when winning a 1400m trial at Otaki last month.

She was then taken north for a 1300m race on the Cambridge synthetic track on June 30 but again disappointed, beating just one horse home. However she was found to have got her tongue over the bit during that race and pulled up distressed.

A tongue-tie was added to the horse’s gear for last week’s race and it brought about a complete change in form.

The mare jumped well from the inside draw and jockey Kate Hercock got her to settle midfield, up against the rail, going down the back-straight.

Coming to the home turn Hercock managed to angle the mare away from the fence to challenge the leaders and then took the front, out centre track, soon after. It then came down to a battle between three horses with Countess Conti keeping up a resolute finish to win by three-quarters of a length from Mr Ghibson, with Jameson only half a head back in third place.

Countess Conti is out of the Thorn Park mare Sentosa Park, who was unplaced in two race starts but had shown ability when winning a 1000m trial.

Wedd is still breeding from the mare and has a three-year-old full-sister to Countess Conti also in work with the Lowry/Cullen partnership and the mare has also left a yearling colt by Time Test. 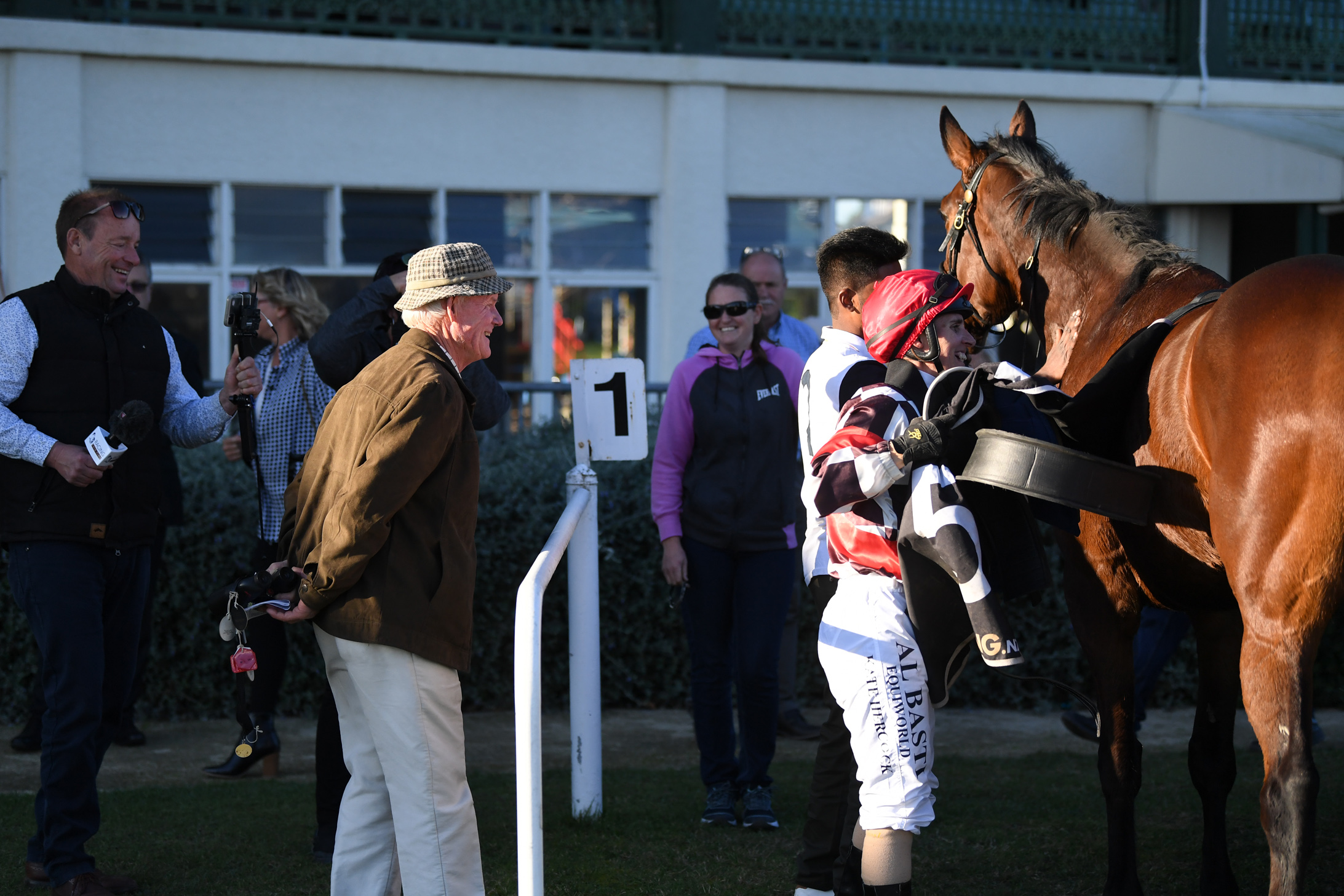 The much-anticipated auction of high-class race mare Jennifer Eccles came to a close at the end of last week with the winning bid securing the high class mare for $800,000 on Gavelhouse.

The successful bid went the way of Kia Ora Stud in Scone, Australia.

Bloodstock manager Shane Wright said the 2019/20 Filly of the Year will be covered one of the studs first season sires.

“She will visit one of our first season sires in either Farnan or Prague, the decision will be made when she arrives and we see her in the flesh,” said Wright.

The winner of four of her 14 starts and placed on a further six occasions, Jennifer Eccles was a dominant winner of the Group 1 New Zealand Oaks (2400m) at Trentham, having previously triumphed in the Group Lowland Stakes (2100m) at Hastings, Group 2 David & Karyn Ellis Fillies’ Classic (2000m) at Te Rapa and Group 2 Eight Carat Classic (1600m) at Ellerslie.

Jennifer Eccles was raced by the Challenge No 10 Syndicate, a group that was managed by bloodstock consultant Adrian Clark and included Napier couple Brian and Lorraine Henneker and Taupo-based Allan and Judy Payne.

Cambridge-based Danielle Johnson has been a runaway winner of her first national jockeys’ premiership.

A winning double aboard It Might Be You and Gerda at Te Rapa last Saturday took her tally to 151 victories, with 15 of those coming at black type level.

With just today’s racing left in the 2020/21 season, remarkably she sits 61 wins ahead of her nearest rival Samantha Collett (90), however she has been determined to focus on the job at hand over the last few months despite being hailed as the premiership winner as far back as January.

“It’s my first premiership, so that is special, but I’ve tried to put it out of my mind despite people telling me it was in the bag for at least the last few months,” Johnson said.

“I wanted to carry on as normal and focus on doing my best on each horse I rode.

Thankfully those horses have been pretty good as you can’t get to the number of wins I have without a great team and some talented horses behind you.

“It was only in the last month or so that I decided to try and get to the 150-win mark, so to have made it with a week to spare is a great feeling as well.”

Pressed on which horse or race win has meant the most to her this season, Johnson settles on the Jamie Richards-trained Avantage as her standout performer.

“Avantage is just such a special mare,” she said. “She has had a stunning career so far, winning a Group One as a two-year-old (Manawatu Sires Produce Stakes) and going on to win at Group level every year since.

“She has won Group One races over 1200m up to 2000m, which shows just how versatile she is and I think in the next 12 months she can get even better.

“If I had to pick one race win at the top of my list it would probably be the Coupland’s Bakeries Mile (Group 2, 1600m) on Hypnos.

“It’s the richest mile race in New Zealand and he (Hypnos) was just so good that day that it really stands out for me.”

With the backing of the Jamie Richards and Stephen Marsh stables behind her, Johnson is looking forward to another exciting year ahead.

Along with taking out her first jockeys’ premiership, Johnson also brought up another milestone this season by breaking the 1000 career wins mark, with her current tally sitting at 1031 victories and over $20 million in prizemoney earnings.