Hastings-trained No Tip made an impressive winning debut over the steeplechase fences at Ellerslie last Monday but don’t be surprised to see him reverting back to hurdling this winter.

Co-trainer Paul Nelson said this week the nine-year-old, who showed his prowess over hurdles two years ago, could again contest one of the country’s major hurdle races in the coming months.

“He still might have a hurdle race in him yet,” Nelson said.

“We might look at running him in one of the big hurdle races coming up.”

Nelson trains No Tip in partnership with Corrina McDougal and the Mettre En Jeu gelding rose to stardom as a hurdler in the winter of 2019.

A month after winning a  maiden hurdle race over 2500m at Trentham in June that year he was back at the same track a month later taking out the prestigious $35,000 Wellington Hurdle (3400m). He then went on to finish second in the $50,000 Pakuranga Hunt Hurdle (3350m) at Ellerslie in August and third in the $125,000 Great Northern Hurdle (4190m) there in September.

No Tip, who now boasts a record of four wins from 22 starts, is a horse that excels on rain affected tracks and Nelson said, because of the restrictions enforced by Covid-19 last year, the horse never got a chance to continue that form.

“Last year was a non-event really. By the time we got up and running after Covid the tracks were too firm and so we never really got a chance to try him.”

No Tip was given a point-to-point jumping trial in May and three races on the flat to prepare him for last Monday’s 4150m maiden steeplechase at Ellerslie.

Track conditions were at their heaviest after torrential rain in the Auckland area but they were made to order for No Tip.

Jockey Shaun Phelan, who was having his first ride on the horse, positioned him in the first five from the outset and tried to save every inch of ground in the early stages before moving into second place with a round to go.

Phelan then showed great patience to sit quietly aboard his mount as the field bunched heading up the famous Ellerslie hill for the last time and didn’t ask No Tip for a maximum effort until they jumped the second to last fence.

Delegate and jockey Hamish McNeil had taken the lead at that stage but No Tip quickly joined them in front and the two horses fought out a great tussle over the final stages, with No Tip gaining an advantage close to the line to win by 1-1/2 lengths.

“It was a pretty good win really and he handled the track well,” Nelson said.

“When he won the Wellington Hurdles two years ago the track was like that too.”

He added that No Tip may have another steeplechase race within the next month and then a decision will be made as to whether he reverts back to hurdling.

Paul Nelson and his wife Carol bred and own No Tip. He was the last foal out of the Grosvenor mare Grosveness, who is now deceased but was a prolific producer of winners.

Others out of the mare include No Change (11 wins), Ho Down (eight wins), No Cash (seven wins), No Governance (three wins) and No Credit (two wins).

There is a chance the other star jumper in the Nelson/McDougal stable, The Cossack, could head to Australia later this year for a crack at the Australian Grand National Hurdle-Steeple double.

The seven-year-old Mastercraftsman gelding showed his class when taking out the $50,000 Fairview Motors Waikato Hurdle (3200m) at Te Rapa three weeks ago.

That was the horse’s first jumping race since he took out the Great Northern Hurdle (4190m) at Ellerslie in October last year.

“He will probably run in the Hawke’s Bay Hurdles next and we will decide after that.”

Akela Belle, a horse raced by a group that includes several ex-players and members of the Napier City Rovers Soccer Club, brought up her second win this season and her fourth in total when taking out a $27,500 Rating 74 race over 2040m at Wanganui last Saturday.

The six-year-old Mastercraftsman mare had been out of form since winning a 1550m race on her home track at Awapuni last November but indicated she was on the way back when a close second behind El Nymph over 2100m at Hastings on May 26.

She managed to turn the tables on that horse last Saturday, after the pair fought a neck to neck tussle up the Wanganui home straight.

El Nymph looked to have Akela Belle’s measure at one point but the latter was not to be denied and managed to get in the deciding stride to score by a long neck.

Akela Belle is prepared by Awapuni trainer Lisa Latta and is raced on lease by a large group of people with the 17-member Hawke’s Bay Footy Boys Syndicate having a 25 per cent share. 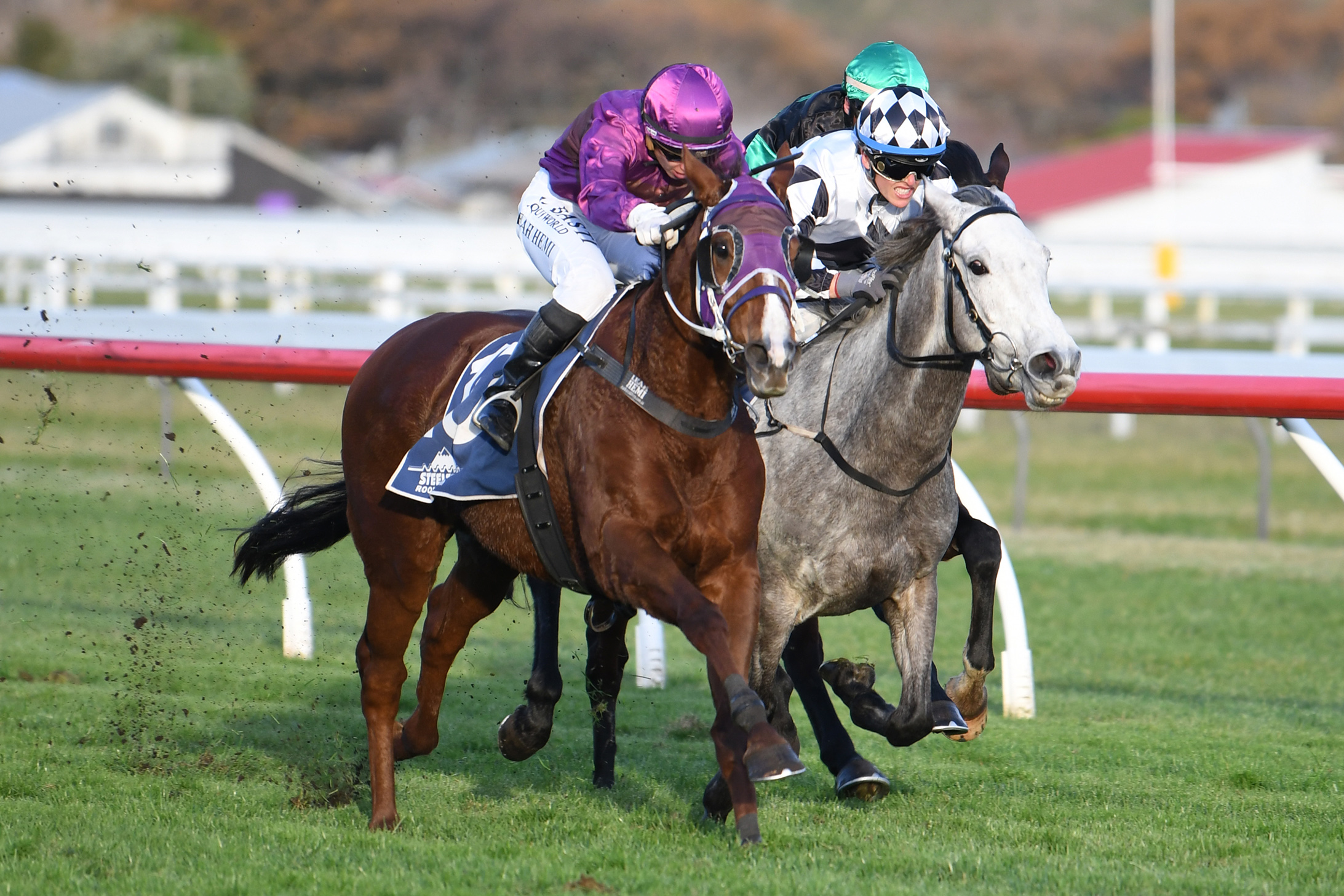 Akela Belle (outside) and El Nymph fighting out the finish of the final event at last Saturday’s Wanganui meeting. Akela Belle managed to get her neck in front on the line.

Supreme Heights, a dominant winner of last Saturday’s Listed $50,000 AGC Training Stakes (1600m) at Wanganui, is now likely to be aimed at Hawke’s Bay Racing’s Group 1 events in the spring.

The mare’s Matamata trainer Mark Brosnan said the daughter of Jimmy Choux will have one more start this campaign, in the Listed $50,000 Tauranga Classic (1400m) on June 26, before being spelled and brought back in the new season.

“She really has developed over the past season and is at her peak now,” Brosnan said.

“Her owners are keen to keep her going, so we’ll have a crack at the Tauranga race later this month and then put her aside again.

“I really believe she is up to Group 1 company if she can strike the right track conditions so we’ll take a look at some of those good races. It would be a hell of a thrill if we could pull of an upset at that level.”

Supreme Heights has been a rags to riches story for her connections. She was passed in for $10,000 at the Karaka yearling sales four years ago and is now a three-time stakes winner. She has now had 21 starts for eight wins, six placings and $218,460 in stakes – almost 22 times her reserve at Karaka.

Ridden on Saturday by Lynsey Satherley, Supreme Heights stalked the front-running Hartley, then cruised up alongside that runner and stuck her head in front just before the home turn.

The five-year-old asserted her superiority in the straight, pulling away and maintaining a clear advantage over the late-finishing Crowned Star to score by three-quarters of a length.

Chuck A Luck, a horse bred and part-owned by a Waipukurau syndicate, chalked up his second Australian win when successful over 2100m at Sandown on May 23.

The Niagara four-year-old, prepared by former New Zealand couple Trent Busuttin and Natalie Young, scored a short neck victory in a $A50,000 Benchmark 78 event, his first success since he won the $A135,000 Mornington Guineas (1600m) in March last year.

Chuck A Luck is raced by a large group of people including the Waipukurau-based Chuck A Luck Syndicate, whose members are Chris and Rae Walker, Ali Baldwin, Paul Beachen, Phil King, David Giblin and Bruce Hooper-Smith.

They bred the gelding out of the Catbird mare Boomchuckalucka.

Before heading across the Tasman, Chuck A Luck had eight New Zealand starts from the Riccarton stable of Michael and Matthew Pitman for a win, two seconds and a third. He recorded his maiden win over 1400m at Riccarton in October 2019 and followed that up with a second behind subsequent New Zealand Derby winner Sherwood Forest in the Group 3 $80,000 War Decree Stakes (1600m) on the same track.

He then contested the Group 1 New Zealand 2000 Guineas (1600m) where he only finished sixth but had his chances extinguished when severely checked soon after the start.