The jumping juggernaut of the early winter, Hastings trainers Paul Nelson and Corrina McDougal, continued their successful roll last weekend by taking out two of the feature races at the Waikato meeting at Te Rapa.

The red-hot combination produced star hurdler The Cossack to win his steeplechasing debut in the $20,000 Ken and Roger Browne Memorial Steeplechase before taking out the $60,000 Signature Homes Waikato Steeplechase with Argyll.

The two victories brought up an amazing seven wins for the Nelson/McDougal stable in the space of a fortnight and has rocketed them to a clear lead on the Hawke’s Bay trainers’ premiership for this season on 17 wins.

With just over a month of the season left to run they are four ahead of the second placed partnership of Guy Lowry and Grant Cullen and five clear of third placed John Bary.

The outstanding run by the Nelson/McDougal stable started at the Hastings meeting on June 6 when they won five of the 10 races including the two feature jumping events, the $60,000 Ken Browne Hurdle with The Cossack and the $60,000 Poverty Bay Hunt Ferguson Gold Cup Steeplechase with No Tip.

On that day they lined up eight horses for five wins, a third and two fourths.

They took five horses to Te Rapa last Saturday for a result of two wins, a fourth and a fifth. The only horse that didn’t pick up stakemoney was Dictation, who finished 10th in a 2100m flat race.

From the 13 runners the Nelson/McDougal stable saddled up at those two meetings they chalked up seven wins, a third, three fourths and a fifth and amassed more than $162,000 in stakemoney.

The Cossack, who is owned by Paul Nelson in partnership with three other Hawke’s Bay men, Peter Grieve and his son Doug and John Frizzell, showed he is clearly the best jumper in the country at the moment when he made a successful transition from hurdling to steeplechasing over 3900m.

Last season’s Champion Hurdler, whose past victories have included two Great Northern Hurdles, a Grand National Hurdle, a Wellington Hurdle and a Waikato Hurdle, stepped up to the bigger fences with aplomb.

Jockey Shaun Phelan settled the Mastercraftsman eight-year-old back second last in the eight horse field for a start before improving his position quickly to be right in contention with the leaders with 1000m to run.

The Cossack jumped his way to the front at the second to last fence and victory was never in doubt after that. He cleared the last jump with his usual proficiency and raced clear to win by 6-1/2 lengths, with Phelan standing high in the irons and giving a waving gesture to the crowd to applaud one of the best jumpers New Zealand has seen in modern times..

The judicial committee took a dim view of Phelan’s pre-post celebratory gesture and fined him $300.

The fine paled in comparison to what Phelan earned in what was another stellar day for the talented jumps rider.

Not only did he win on The Cossack in the maiden steeplechase but he also took out the day’s two feature jumping races, aboard Dr Hank in he $60,000 Fairview Motors Waikato Hurdle (3200m) and Argyll in the $60,000 Signature Homes Waikato Steeplechase (3900m).

It was 30-year-old Phelan’s first ever win in both the Waikato Hurdles and Waikato Steeplechase and completed an overall haul of taking out every feature jumping race on the New Zealand calendar.

His great run of form has taken his tally of jumps wins for the season to 13, five clear of his nearest rival Shaun Fannin. A Jumps Jockey Premiership is something he is keen to secure.

Phelan had been confident he had a good book of rides at Te Rapa, although he admitted he felt the most pressure aboard The Cossack who was at the prohibitive odds of $1.30 to win his first attempt over the bigger fences.

“Riding The Cossack was quite a surreal feeling as I don’t think I’ve been on a horse before that people had marked as the winner before the race had even started,” he said.

“My job was just to get him around safely, which is quite an ask at Te Rapa as it is a very tricky course if you haven’t jumped those steeplechase fences before.

“He really is a superstar as he just did it efficiently with no fuss and although he got it slightly wrong at the fence leaving the straight, he never really got out of second gear.

“He could be the best jumper I’ve ridden and that says a lot as I was also lucky enough to ride Tallyho Twinkletoe as well.”

Phelan ensured the Waikato Steeplechase was run at a solid tempo as he pressured the early leader Flyingwithoutwings before taking Argyll to the front at the 1200m mark.

Attacked by Delegate and then Carnaby in the closing stages, Argyll kicked away approaching the last fence and held out all challengers to win by 5-1/2 lengths.

The horse started out in Foote’s stable and recorded one second placing on the flat before transferring to the Nelson/McDougal stable two years ago and has now recorded two wins from five starts over steeples.

Argyll is out of the four-race winner Politic and comes from an extended family that includes dual Great Northern Hurdle (4190m) and Grand National Hurdle (4200m) winner Just Not Cricket, who was also trained by Nelson. 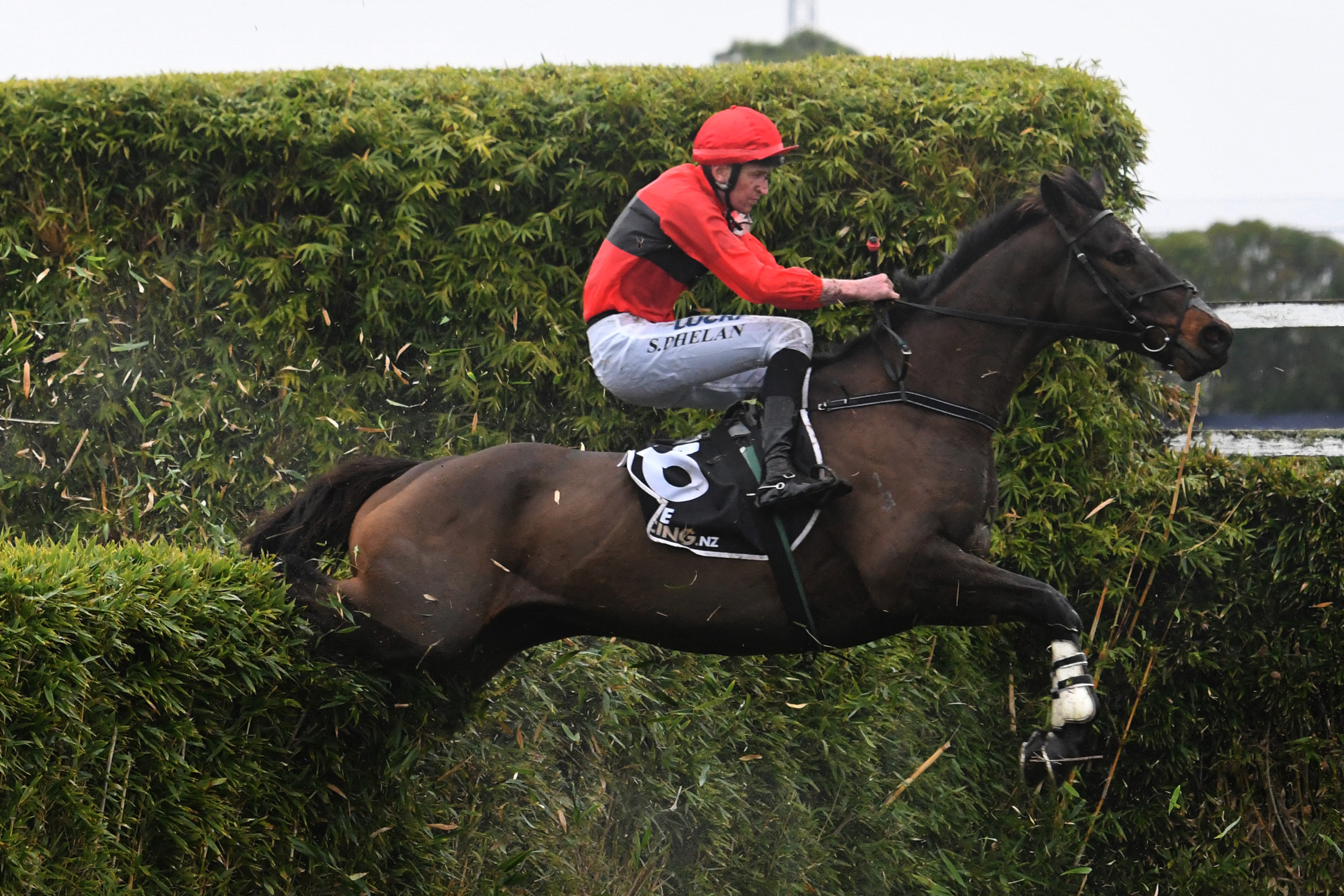 Hastings-trained Argyll and jockey Shaun Phelan negotiate one of the live fences on their way to victory in last Saturday’s $60,000 Signature Homes Waikato Steeplechase.

Plenty to see on weanling walk

Sixteen individual stallions are represented among the 31 weanlings, including the well proven sires Shocking, Proisir, Contributer, Time Test, Ocean Park, Sweynesse, Belardo, All Too Hard, Tarzino, Darci Brahma and Redwood as well as stock by the Hawke’s Bay-based stallions Sneaking To Win and Mongolian Falcon.

The general public are invited to attend and the 31 weanlings are spread between six Hawke’s Bay properties which means it will be an early 9am start.

The first property to be visited will be Willow Tree Farm at 191 Matapiro Road where there will be nine weanlings on show, with colts by Shocking, Ace High and Proisir and fillies by Contributer, Complacent and Time Test.

Guy Lowry’s property at 305 Kawera Road will be the second property where there will be colts by Sweynesse and Belardo and a filly by Ocean Park.

Mike Newrick’s property at 51 Turamoe Road, Pakipaki, will be the third property where there will be a colt by All Too Hard and fillies by Tarzino and Telperion.

The fourth property to visit will be Golden Oaks, which is at 39 Mangaroa Road, and here the stallion Sneaking To Win will be paraded as well as two weanling colts and three weanling fillies by that sire.

Richard McKenzie’s property at 121 Rosser Road will be the fifth property and he will have two weanling fillies by Darci Brahma and one by Time Test on show.

Vicki Wilson’s property at 87 Rochfort Road, Kahuranaki, will be the last property visited and here there will be weanling colts by Jon Show, Redwood and Mongolian Falcon on show as well as fillies by Mongolian Falcon and Redwood.

The resident stallion, Mongolian Falcon, will also be paraded.

Reservations for the luncheon are essential and those wishing to partake are asked to RSVP to Chris Walker at either 021 617561 or email: ypukwalkers@xtra.co.nz

Hastings racegoers will now be treated to back-to-back Saturday meetings in early July.

There will be nine races on the program, with the first timed for 10.30am and the last at 4.07pm.

There will be a $10 admission charge and a $30 charge for the Members Stand.

With the Awapuni track out of action for the remainder of this season the Marton Jockey Club race day on Saturday, July 9, has had to be transferred to another track.

Hawke’s Bay Racing has picked up this date and will run it as a Hawke’s Bay meeting.

The Niagara six-year-old showed great fighting qualities to get up and snatch a last stride win over the pacemaker Crystallize.

New York Jazz has also recorded six seconds and 11 thirds and his latest success took his stake earnings to more than $236,000.

He was bred by the Hastings brothers Chris and Ken Russell and is still owned by Chris Russell. He has leased the horse out to Te Awamutu trainer Stephen Ralph who races him with three other people.

New York Jazz is out of the Coats Choice mare Shesalljazz, who was the winner of five races from only 22 starts and has also left the winner Nigella Jazz.