The couple own a 10 per cent share in the outstanding mare, who brought up her 14th Group 1 victory and thus surpassed the great Sunline for the most Group 1 wins by a New Zealand-trained galloper.

The Walters are the biggest shareholders in the 34-member Fortuna Melody Belle Syndicate that races Melody Belle from the Matamata stable of Jamie Richards and have been living a dream for the past five years as the horse has kept climbing to new heights. But they also know that this will be the mare’s last season of racing and  they probably won’t get to see her compete again.

Melody Belle will be sold at the conclusion of her racing career in the coming months before she heads to the broodmare paddock and Walters said it was an emotional time for both him and Debbie when their pride and joy was led away after her crowning moment.

“We said our goodbyes to her and took a couple of photos because it is doubtful whether we will see her race again,” he said.

“The syndicate will be divvied up once she is sold.”

Last Saturday brought up Melody Belle’s 19th win from 38 starts and she has also chalked up a second and six thirds. Her stake earnings have now topped $4.2million.

“She has given us five years of thrills and delight,” a still excited Walters said about an hour after he and Debbie arrived home last Tuesday night.

“We are absolutely stoked and so glad we were able to be there on course to see her get the record,” he said.

“For Melody Belle to do it on the course where Sunline is buried was quite a touching moment.

“To get so much success from a horse is quite uncommon and we are just thankful that we have been a part of it.”

Melody Belle was purchased from the Karaka yearling sales for $57,500 by Te Akau principal David Ellis, on behalf of Fortuna Thoroughbreds, whose manager John Galvin then set about syndicating the horse.

Trevor Walters, a keen darts player, was at home practising in his shed when he heard John Galvin on Trackside Radio advertising shares available in a well bred filly by Commands out of Meleka Belle.

Walters had been a shareholder in a few horses before, the best of them being Fantastic Honour who finished second in the 2013 Karaka Million Two-year-old Classic at Ellerslie.

He rang Galvin and said he was interested in taking a share in the Commands filly and also mentioned that he would like to win the Karaka Million, after having gone so close before.

Galvin said the filly, subsequently named Melody Belle, was just the right type to win a Karaka Million so Walter and his wife Debbie agreed to take a 10 per cent share.

She only won one race from a handful of starts as a three-year-old, that being the Group 3 Mongolian Khan Trophy (1200m) at Ellerslie, but it was as a four-year-old that she really started to come of age.

Her first three starts in the spring of that season resulted in wins in the Group 2 Foxbridge Plate (1200m) at Te Rapa and both the Group 1 Tarzino Trophy (1200m) and Group 1 Windsor Park Plate (1600m) at Hastings.

She then added another hat-trick of Group 1 wins in the autumn of that season, taking out the BCD Sprint (1400m) at Te Rapa, Haunui Weight-for-age (1600m) at Otaki and Bonecrusher New Zealand Stakes (2000m) at Ellerslie.

Melody Belle returned to Hastings as a five-year-old in the spring of 2019 and became the first horse in the history of the three day Hawke’s Bay spring carnival to take out all three Group1 races, the Tarzino Trophy (1400m), Windsor Park Plate (1600m) and Livamol Classic (2040m).

She then headed back to Australia that year where she showed her class by taking out the $A1million Group 1 Empire Rose Stakes (1600m) at Flemington and was runner-up in the $A2million MacKinnon Stakes (2000m).

Melody Belle was back at Hastings in the spring of last year where she added  back-to-back Group 1 victories in both the Windsor Park Plate and Livamol Classic before recording another minor placing in the MacKinnon Stakes in Melbourne.

She was then given a break and resumed with an impressive fresh up win in the Group 1 Thorndon Mile ( 1600m) at Trentham on January 30.

That run possibly took the edge off the mare as she was clearly not at her best when next produced, finishing ninth out of 10 in the Group 1 Herbie Dyke Memorial (2000m) at Te Rapa on February 13. But a trial win over 1230m at Rotorua on March 3 showed she was back to her best and that was clearly evidenced by her dominant 1-1/4 length victory in last Saturday’s 2000m feature at Ellerslie.

Ridden confidently by jockey Troy Harris, Melody Belle settled second last and on the back of stablemate Avantage in the early stages before he started stoking her approaching the home turn.

Royal Performer and jockey Jonathan Riddell got up inside her on the point of the turn and bumped her off stride. But Harris quickly got the mare balanced up again and she quickly hit full-stretch, racing clear in the final stages to win by 1-1/4 lengths.

Stablemate Avantage was a game second, chasing hard and managing to get her head in front of Tiptronic right on the line.

Melody Belle will now be given a chance to bring up a 15th Group 1 victory as she will be flown to Sydney next week for a tilt at the $A1.5million Tancred Stakes (2400m) at Rosehill.

“She is booked to fly on March 25 and she will be able to work that morning and go straight into the Tancred,” Fortuna Syndication’s John Galvin said.

“The only reservation would be track conditions. If it was a really heavy track we might not want to race her at 2400m because it is the first time she would have raced at that distance.

“2000m is clearly her pet trip and she is pretty dominant at it from what we have seen.

While looking forward to the Australian leg of what will be Melody Belle’s farewell tour, Galvin was left pondering on Monday the significance of his mare’s accomplishments, after she brought the curtain down on her New Zealand racing career in the best possible fashion.

“There were all sort of emotions on Saturday,” Galvin said. “The fact that it was her 14th Group 1 win and it was a magnificent occasion on Auckland Cup day at Ellerslie.

“My main emotion was relief that once again we saw how good she was.

“It was fantastic to be there with the crowd, the weather, and the big group of owners, many of them were there and there was a lot of emotion.”

“He is a lovely rider and rode her perfectly,” Galvin said. “He has had four rides for four wins on her, and that’s five Group One rides and five wins for Troy on Fortuna horses. He has ridden for us 14 times in total, for 11 wins. It is a pretty good strike-rate.” 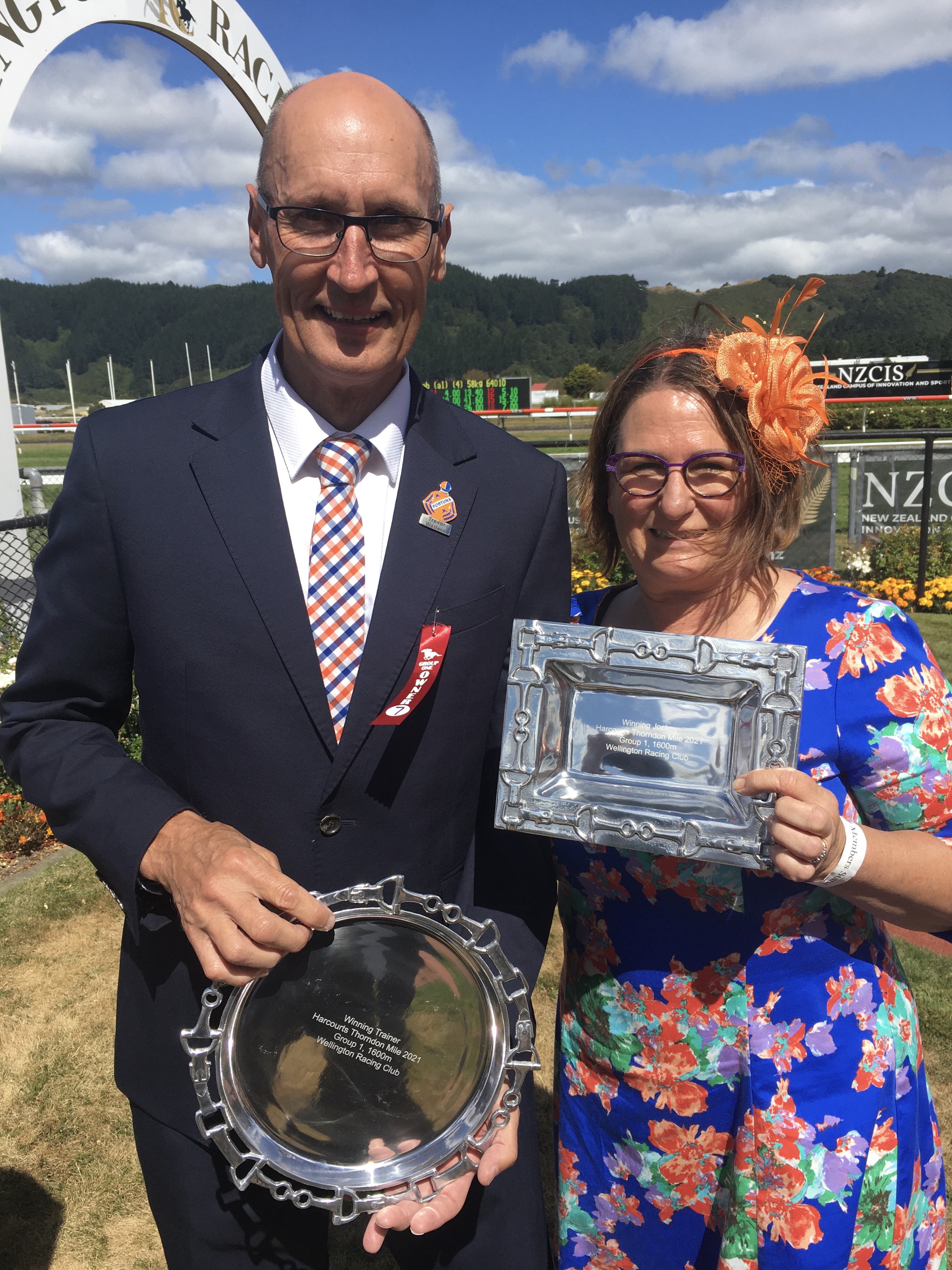 Cambridge trainer Murray Baker is looking to land a pair of Sydney three-year-old features for a remarkable sixth time with his exciting colt Frontman.

Baker, who trains in partnership with Andrew Forsman, has a splendid record throughout Australasia, but no races have been better to him than the Group 2 Tulloch Stakes (2000m) and the Group 1 Australian Derby (2400m), both of which he has won on five occasions.

He’s hopeful Frontman can give him his sixth victories in both the Tulloch, run at Rosehill on March 27, and the Derby a week later.

Baker’s victories in the Derby, with Nom de Jeu, It’s A Dundeel, Mongolian Khan, Jon Snow and Quick Thinker – all since 2008 – are well-known. Few New Zealanders have had such a record in any top-level Australian race.

His record in the Tulloch Stakes is spread over a much greater time period than the Derby. Baker recorded his first Australian stakes win when Our Palliser won the Tulloch in 1987, and he was back to win it in 1993 with The Bill. His subsequent victories were with Harris Tweed (2009), and his two most recent Derby winners, Jon Snow and Quick Thinker.

Frontman, a brother to Baker’s 2017 Group 1 Australian Oaks (2400m) winner Bonneval, was flown to Sydney last Monday after having just four races. He’s only been victorious once, at his debut, but he showed his potential with a close third in the Group 1 New Zealand Derby (2400m) at Ellerslie on March 7.

“He’s very similar to Bonneval, a nice type of horse with a good temperament,” Baker said.

“He has been good since the Derby. He’s a well-bred horse that continues to improve, but they seem like quite a good crop in Australia this year.”

If he gets to the Australian Derby he could well take on his Ellerslie conquerors, Rocket Spade and Milford, who have also been flown to Sydney.