It’s a case of business as usual for Te Akau Racing’s trainer Jamie Richards despite the postponement of last Saturday’s Golden Slipper race meeting at Rosehill racecourse in Sydney.

Officials elected to push the card back by a full week, with the knock-on effect that all the feature autumn race days in Sydney will be run a week later than scheduled.

Richards has a number of his stable stars set to travel for black type assignments in the coming weeks including the star of the show at Trentham last Saturday, the Group 1 New Zealand Oaks winner Amarelinha.

Richards was enjoying the aftermath of another successful Saturday after producing Need I Say More to win the Group 2 $100,000 Wellington Guineas (1400m) ahead of a stunning performance by Amarelinha in the $400,000 New Zealand Oaks (2400m), where she won easing down by a length after nearly dislodging jockey Opie Bosson when she went up in the air as the gates opened.

“You never take this game for granted and Group 1 races are never easy to win, so I’m thankful that we could get another one with Amarelinha,” Richards said, reflecting on his 44th Group 1 success in his training career.

“She gave us a bit of a fright at the start and Opie nearly lost his inside iron, but thankfully it worked out well and I was confident at the 800m that, if she could stay the distance, she was going to be hard to beat.

“The whole team is going well and our operation is really firing. Dave (Ellis) is buying the right horses, our systems that have been developed over the last 30 years are working well, we have very capable and dedicated staff and we have a great bunch of owners involved so it is all very satisfying.”

Waipukurau’s Michael Ormsby is one owner who is getting plenty of thrills from being involved with Te Akau Racing.

Need I Say More brought up his seventh win from only nine starts with a dominant 1-1/2 length victory at Trentham last Saturday and took his stake earnings to more than $283,000.

The Australian-bred gelding, a $160,000 yearling purchase by David Ellis, disputed the early pace in the 1400m feature before taking control rounding the home turn and kept up a powerful finish to the line.

While there is plenty more to achieve in New Zealand over the last four months of the season, Richards will now focus on the members of his team heading to the rich Sydney carnival, although he will be keeping a close eye on track conditions there over the next few weeks.

“It was certainly a shame for them that they got the rain they did and had to postpone last Saturday’s meeting,” Richards said.

“It didn’t really have too much effect on us as we are going to stick to the plans we had made for our horses before the shift in the carnival dates was announced.

“In my experience if you start to alter things too much, that is when problems can occur.

“We will assess when our horses fly over, but in some cases the delay could be a good thing.

“If Amarelinha goes over to tackle the Australian Oaks (2400m) that extra week will be of benefit as it allows her a few more days to recover from her exertions at Trentham.

“She is one that definitely needs a good track so that factor will have a bearing on whether we go or not.

“We will stick with our original plan with Melody Belle who will race in the Tancred Stakes (2400m) next.

“That will give her three weeks between runs which is just perfect for her and she is one that will appreciate some give in the ground if the wet weather sticks around.”

Richards also confirmed that both Avantage and Cornflower Blue will now contest the Group 1 $200,000 Fiber Fresh NZ Thoroughbred Breeders’ Stakes (1600m) at Te Aroha on April 10, with Avantage likely to have an exhibition gallop between races at next Wednesday’s Matamata meeting to further her preparation.

Napier’s Garry Trow celebrated his biggest moment in racing when Military Step took out the $20,000 South Waikato Cup at Matamata on Wednesday of last week.

Trow owns a 25 per cent share in Military Step, making him the biggest shareholder in the Te Akau Quick March Syndicate that races the five-year-old from the Jamie Richards stable at Matamata.

He initially took a 20 per cent share in the syndicate but, when one of the members withdrew, he took up another five per cent.

His main reason for wanting a share in Military Step is because the horse is by Tavistock and he has always been an avid fan of the now deceased stallion.

Military Step brought up his third win from only 12 starts when successful last week and has also recorded three seconds and three thirds  was having his 12th start last week and took his stake earnings to $31,000. He was purchased for $62,500 as a yearling by Te Akau principal David Ellis.

Apprentice Joe Kamaruddin, who is attached to the Te Akau stable, also brought up one of his biggest wins when steering Military Step to victory last week.

He had the horse settled nicely in sixth place in the early and middle stages of the 2000m event before improving three-wide coming to the home turn.

Super Hoof led the field into the home straight but Military Step produced a strong finishing burst in the last 200m to race clear for a 2-1/4 length win.

Richards said afterwards that he didn’t expect Military Step to win the way that he did as he was stepping up a lot in class after coming off a last start win in a Rating 65 race over 2040m at Wanganui. 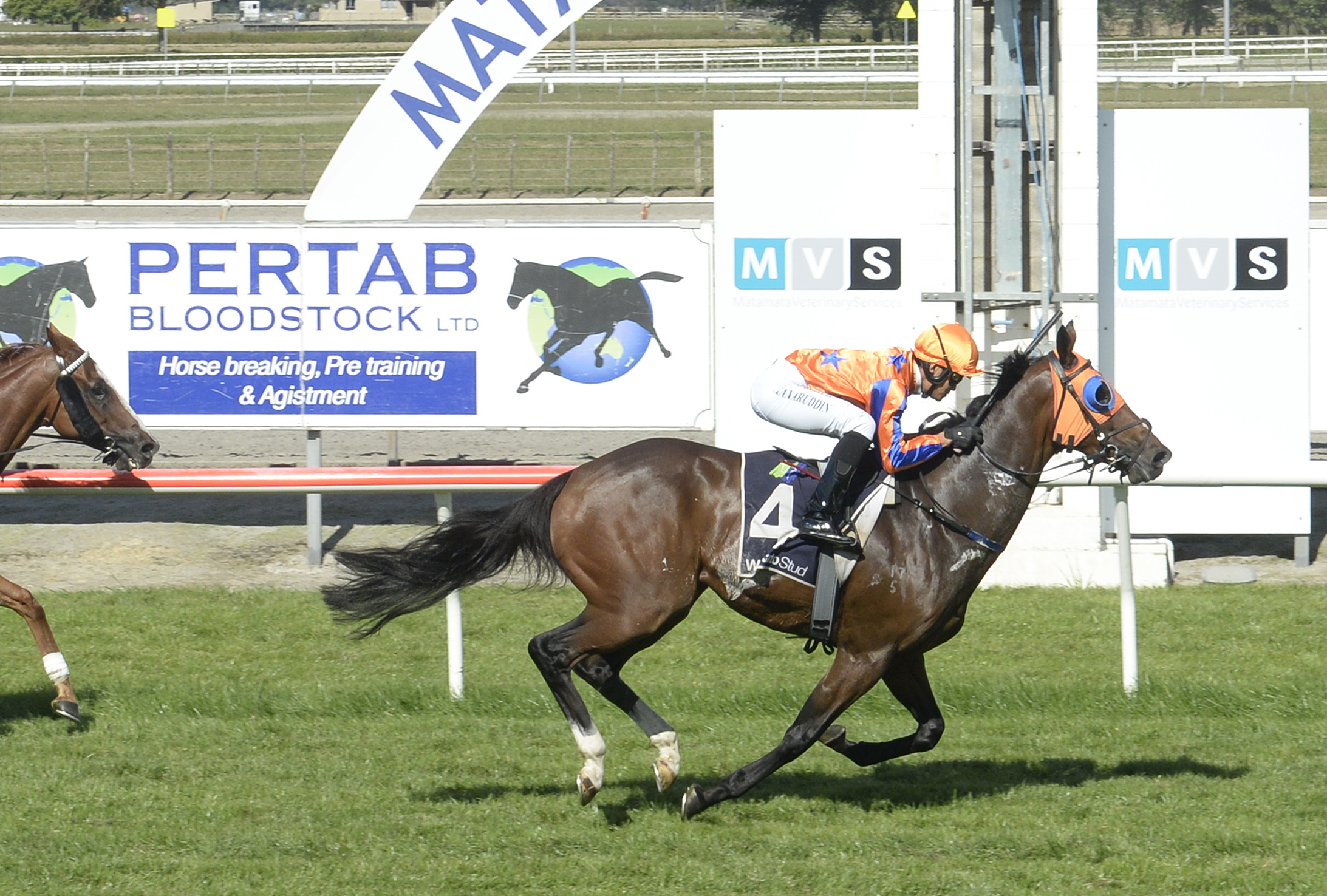 The Zed mare will clash with a European star in Addeybb for the third time when the pair line up in today’s Group 1 $A700,000 Ranvet Stakes (2000m) at Rosehill and her connections are keen to try her further afield next season.

Part-owner Brae Sokolski harbours ambitions for the mare to head to France and tackle the Group 1 Prix de l’Arc de Triomphe (2400m) at Longchamp in October and revealed that the rest of the ownership group are warming to the idea.

"They are lofty ambitions we have for her on the global stage, but the time will be absolutely right for her,” Sokolski said.

“She’ll be a six-year-old mare at the peak of her powers going to her best distance and likely on a suitable wet surface. There is a lot of water to go under the bridge before we get there (Europe) because it is not a well-worn path we will be taking. It’s something we’ve got to put into action ourselves to create our own path and while that makes it more challenging, it is also more exciting."

Pukekohe trainer Nigel Tiley will downsize his team at the end of May to concentrate on training just those horses he has an ownership in.

The former top-line jockey said the change in focus is coming largely so he and his wife Lee can spend their winters in Queensland.

“We bought a house there a couple of years ago. It’s more for Lee’s health than anything, she’s had some circulation problems so it’s imperative she has a warm climate in winter,” Tiley said.

“We tried to keep the stable going without us being there, but it just doesn’t work.”

Tiley has informed most of his stable owners of the plan, which will result in Tiley ceasing training for clients from the end of May, relinquishing on-course stabling at Pukekohe and further developing his home property which is just minutes away from the racecourse.

“I’ll hang on to one or two of the older horses that we’ve got there now, like Demonetization, that have been there since they were young horses,” Tiley said. “It’s not fair to send the older horses anywhere else.”

Tiley said the decision wasn’t related to New Zealand prizemoney, though he would like to see returns to owners and participants improve.

“I’d like to have more faith in the industry that what I’ve got. There’s been a lot of talk out there but so far there hasn’t been a lot of action,” he said.