What Hastings filly Swing Low lacks in size and stature at the moment she more than makes up with in toughness, as she showed when scoring a gutsy maiden win at Woodville last Sunday.

The three-year-old Redwood filly, trained by John Bary, was never closer than three-wide for the entire 1600m of her race yet still managed to stave off a late challenge from race favourite Aljay to score a half-head victory.

Apprentice jockey Wiremu Pinn settled Swing Low in the rear division in the early stages before sending her forward starting the last 800m. The filly was four-wide when moving up to join the leaders rounding the home turn and hit the front soon after.

Aljay had got too far back and was still last at the top of straight. He produced a powerful finish down the outside of the track and was quickly eating into Swing Low’s lead but the winning post came up just in time for the filly.

Mike Sanders, racing manager for the John Bary stable, said Swing Low’s win was a bit unexpected given that it was only her second start and she had a wide draw to overcome.

“She went a good race first up at Woodville a couple of weeks ago for seventh and had improved from that but she is a very light filly and needs building up,” Sanders said.

“She is one of those fillies that eats up a storm but doesn’t seem to put on weight at the moment but she is very tough.”

Sanders said Swing Low weighed just over 400kg when she came into work earlier this season and tipped the scales at just 386kg after Sunday’s success.

“The plan now is to turn her out for two or three months,” Sanders said.

“She is a tough filly that just needs time to strengthen and fill out a bit more and, once she does, she should develop into a good stayer.”

Swing Low certainly has plenty of staying blood in her pedigree. Her dam Sun Chariot is by Desert King, whose progeny includes the three-time Melbourne Cup winner Makybe Diva.

John Bary bought Swing Low for $16,000 at the 2019 Ready-To-Run Two-year-old sale and the filly is raced by the Chariots Of Fire Syndicate, which is managed by Mike Sanders.

Ivan Grieve, who has been a loyal supporter of the Bary stable for a long time, is a member of the syndicate along with the brothers John and Barry O’Sullivan, James Truman, Tim Gillespie, Mike Phillips, Rob Hardie, Carl Clements and Simon Doull.

Mike Phillips lives in Taupo and Simon Doull is in the Waikato but all the other syndicate members reside in Hawke’s Bay.

Platinum Star’s win in a maiden race at Woodville last Sunday brought up a special milestone for her Awapuni trainer Lisa Latta.

The victory was Latta’s 1000th New Zealand career win after she was encouraged to step out as a trainer in her own right in 1998, following the death of her boss and mentor Malcolm Smith.

Latta trained five winners in her first solo season and has built an enviable record over the past 24 years through the deeds of quality gallopers such as Wharite Princess, Fort Lincoln, Mikki Street, Platinum Witness, Platinum Invader and Sentimental Miss.

Winning the National Trainers’ premiership in the 2013/14 season is one of many highlights for Latta, who has also chalked up 62 stakes race wins domestically as well as winning black-type races in Australia with Platinum Kingdom and Zennista.

To reach the 1000-win milestone is something Latta never contemplated when she decided to enter the trainers’ ranks on her own.

“I guess this has been a long time coming and it is more a feeling of relief to get the monkey off my back rather than anything else at the moment,” she said.

“It was great to achieve the 1000 wins with a horse bred and part-owned by Neville McAlister, as he has played such a big part in my career.

“Neville and John and Lynne Street were right behind me when I started out and have been great supporters over all the years I have been training.

“I’ve just been really lucky to have had terrific and loyal owners, along with great staff, who have all played their part in getting us to where we are today.”

While loathe to single out the best horse she has trained, Latta reserves special mention for 2011 Karaka Million Two-year-old winner Fort Lincoln.

“Fort Lincoln winning the Karaka Million was a very special day for the stable,” she said.

“I would also say horses like Wharite Princess (G1 New Zealand Oaks), Platinum Witness (G1 NZ 2000 Guineas) and Authentic Paddy, who won 11 races, are some of the others that spring to mind.” 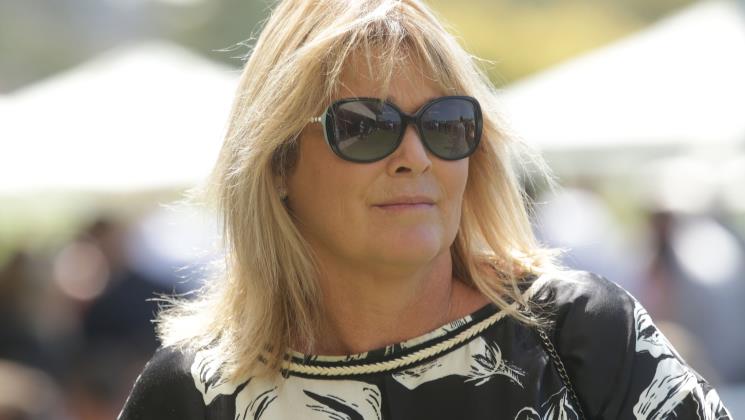 Trainer Jack Scott and jockey Darryl Bradley, both in the twilight of their careers, combined for a memorable success when Miss Sher Nan took out last Sunday’s $20,000 Woodville-Pahiatua Cup.

The pair are both based in Foxton and have become close friends in recent years.

Scott, who only has one or two horses in work at any time, will celebrate his 90th birthday this month while 54-year-old Bradley juggles his race-riding with also managing the Foxton racecourse.

Miss Sher Nan, who is also part-owned by Scott, has now won five races and Bradley has been aboard the Fully Fledged six-year-old in each of those victories.

The mare is fast becoming a Woodville track specialist as she has now had eight starts on the course for four wins and two seconds.

Bradley settled Miss Sher Nan back in seventh place in the early stages of the 1600m event before improving her position to be just in behind the leading division rounding the home bend. They were momentarily held up for a few strides until Bradley managed to angle for an inside run and Miss Sher Nan finished strongly to win by half a length from Semper Magico, with Flying Surf a short head back in third. 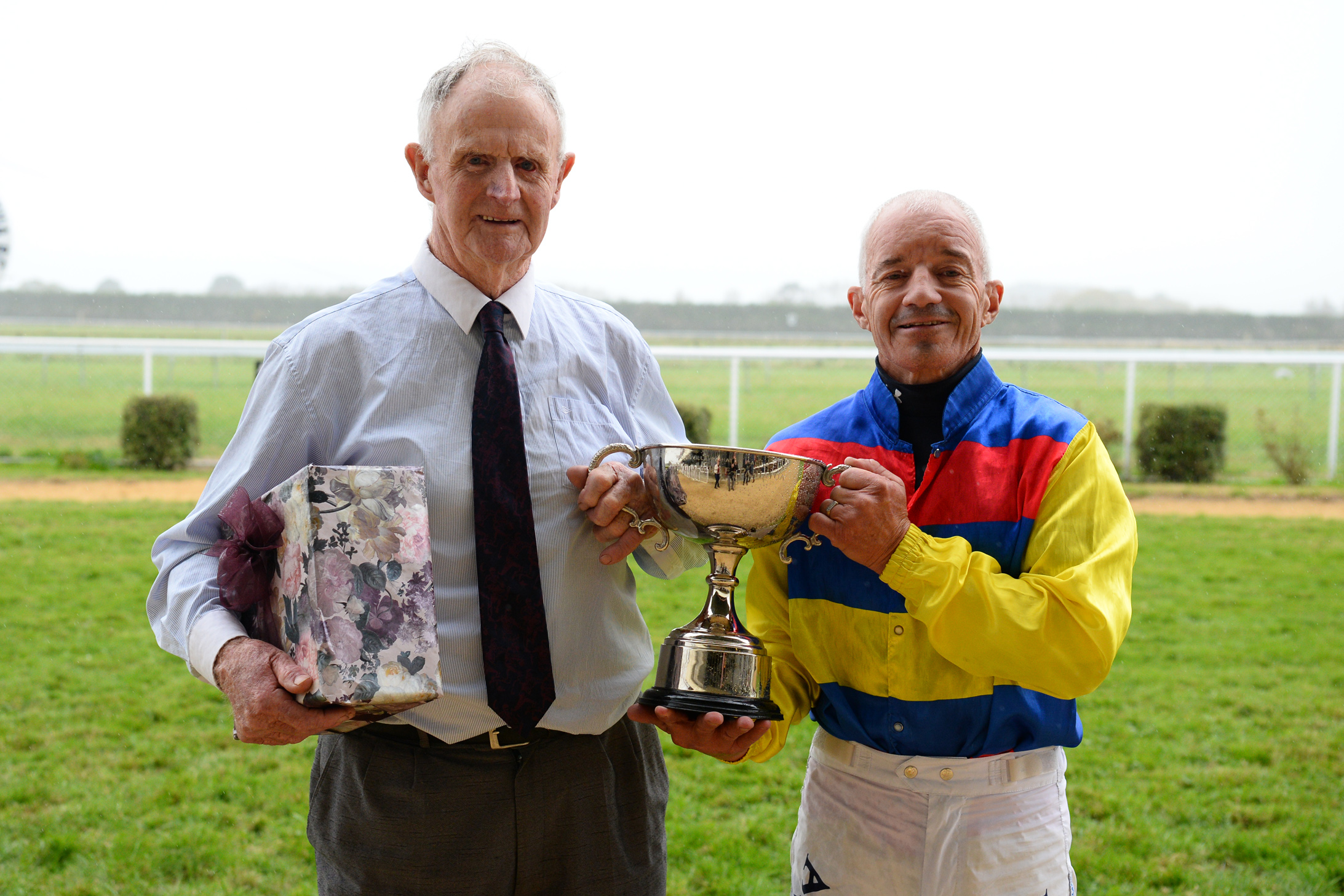 Next Saturday’s Group 1 $A700,000 Doomben Cup (2000m) remains as the final race start in the illustrious career of Melody Belle.

“I thought she ended up in quite a nice spot from a tricky barrier and looked like she was starting to work home and was going to run fifth or sixth,” Richards said.

“But she got checked half-way down the straight and that was pretty much game over.”

Richards said Melody Belle would need to improve a lot from that run but he was confident she would be a more formidable challenger in the weight-for-age Doomben Cup.

“We’ve got a lot of work to do but we can have her better,” he said.

“We had a bit of trouble with a couple of niggling things last week which meant she hasn’t been at her best, but I’m sure we can get things right.”

Despite his confidence, Richards said it was hard not to be impressed by Zaaki, who won easily by 2-1/4 lengths and could have won by more.

“She’d need to improve a bit to beat the winner. He looked to be a very promising horse, no doubt about that,” he said.

A spate of incidents last weekend has resulted in a number of jockeys joining the injury list, with a couple having an enforced winter hiatus.

At Woodville on Sunday, leading Central Districts jockey Lisa Allpress was involved in an incident in the starting gates where she sustained a head knock after being dislodged from her mount Castani.

Castani was subsequently late scratched and Allpress was taken to Palmerston North hospital for observation. She expects to be back riding at Awapuni next Saturday.

Kozzi Asano’s bid to retain his national apprentice jockey’s premiership title took a hit when his mount Jackaroo clipped heels and fell in the last race at Woodville. He suffered a broken collarbone and will be out for four to six weeks.

On Saturday, jockeys Johnathan Parkes and Masa Hashizume were also involved in a race fall at Te Rapa.

Parkes also has a broken collarbone and will be out for at least six weeks while Hashizume was lucky to escape with just bruising and should be back riding next week.