Watch Every Race LIVE
IN Racing
Hawkes Bay Racing Column - May 22
Freddy retired from the track but will have another role
John Jenkins | May 22, 2021
Link Copied
Hastings trainer Lee Somervell and Freddy with Cranford Hospice staff and inpatients

One Prize One Goal, the thoroughbred that provided so much joy and happiness to inpatients and staff when he visited Hastings Cranford Hospice during the Covid-19 crisis last year, has been retired from the racetrack but will remain an ambassador for the equine industry.

The seven-year-old’s Hastings trainer Lee Somervell said this week that “Freddy”, as he is affectionally known around the stable, had his last race when unplaced over 1600m at Hastings on May 1.

The Ekraar gelding, whose last win was over 1300m at Taupo in August last year, had developed a minor wind affliction which meant he wasn’t getting the required oxygen intake under race conditions.

“We have decided to retire him. He has been a great competitor who won five races and over $107,000 in stakemoney so he can now enjoy life in the paddock,” Somervell said.

Twelve months ago Somervell took up an invitation from Cranford Hospice staff to take Freddy to the Hastings palliative care centre and let him get close to some of the inpatients and staff members.

Although One Prize One Goal was in full training at the time, Somervell was confident he would be ideal for the occasion, given that he is so placid and docile.

The welcoming party at Cranford Hospice would have been too overwhelming for most racehorses but Freddy took it in his stride, walking around the garden area without a care in the world and enjoying the many affectionate pats he received.

“To the delight of those staying in our inpatient unit, Freddy the racehorse visited our garden with his trainer, Lee Somervell.

“Described as a “big softie”, Freddy loves being indoors, and has such a calm temperament, as you could see by his relaxed attitude around all those showing him attention.”

Somervell has since taken Freddy to other venues, including the funeral of one of the Cranford Hospice inpatients, and is keen to continue doing so in the future.

“I’m sure there are plenty of people out there in rest homes that would love to see him and I’d like to take him to primary schools and let the young kids get to see what a real racehorse looks like,” Somervell said.

One Prize One Goal is by Ekraar out of a mare called Sheeza Kinda Magic and gets his race name from the lyrics of a famous song produced by the band Queen, with his stable name Freddy coming the band’s late lead singer Freddy Mercury.

He is owned by Somervell’s partner Shirin Wood and her Australian-based son Calvin and was bred by them in partnership with Shirin’s late husband Kevin, who died of cancer in 2016.

One Prize One Goal had 55 race starts and recorded five wins, nine seconds and eight thirds. He returned a dividend seven times from 19 starts on the Hastings track.

Ivanka could have another run

The Hastings husband and wife training combination of Mick Brown and Sue Thompson had intended turning promising two-year-old Ivanka out for a spell following her last start win but have kept her ticking her over in their stable.

There has been some interest from overseas buyers in the Vadamos filly and, if she doesn’t sell, she may contest the Listed $50,000 Castletown Stakes (1200m) at Wanganui on June 5.

“We’ll keep her going towards that race but if the track is really heavy she won’t start,” co-trainer Mick Brown said.

Hawke’s Bay Racing will stage its annual Fruitfed Supplies race day at the Hastings track next Wednesday, May 26.

At this stage an eight-race programme has been scheduled with the first timed for 11.57am and the last at 4.04pm.

The gates will open at 11am with free entry onto the course and free entry to the Members Stand.

There will be a 2500m hurdle event but, due to the extreme firmness of the steeplechase track, the 4000m steeplechase has been replaced with a Jumpers’ Flat Highweight over 2500m.

Due to the running rail being out seven metres from the true position, the maiden 1000m race will now become a maiden two-year-old and up event over 1100m.

Out of principle, New Plymouth trainer Allan Sharrock hasn’t attended a horse of the year awards function since 2006 but a promise to his stable apprentice Hazel Schofer could see him taking his tuxedo to the drycleaners.

Sharrock made his stand against attending the awards after his star galloper Wahid was initially denied three-year-old of the year honours despite receiving more votes than Darci Brahma before he was later promoted to joint winner after an investigation into the fiasco.

Earlier this season Sharrock promised Schofer that if she could win the national apprentice premiership, he’d end his self-imposed awards boycott.

“I told her that if she won the apprentice title, I’d go back to the awards to see her presentation and the way things are going, I might have to dust off the old suit,” Sharrock said.

Schofer, 22, racked up a treble of wins on her home track at New Plymouth last Saturday and is now one ahead of Kozzi Asano in the race for top apprentice, with the latter likely to be sidelined for at least another month after suffering a broken collarbone in a race fall at Woodville on May 9.

Sharrock has mentored past champion apprentices Michael Walker and Matthew Cameron and would love to see Schofer pick up this year’s title.

“To have her join Michael and Matthew would be a great feather in her cap, as well as mine,” Sharrock said.

“She rides well. She doesn’t ride in the South Island and, at the moment, isn’t riding much below 56 kilos so to do what she’s done is a credit to her.

“Trainers are still happy to book her knowing they won’t get her full allowance so she’s pretty much riding as a senior already.” 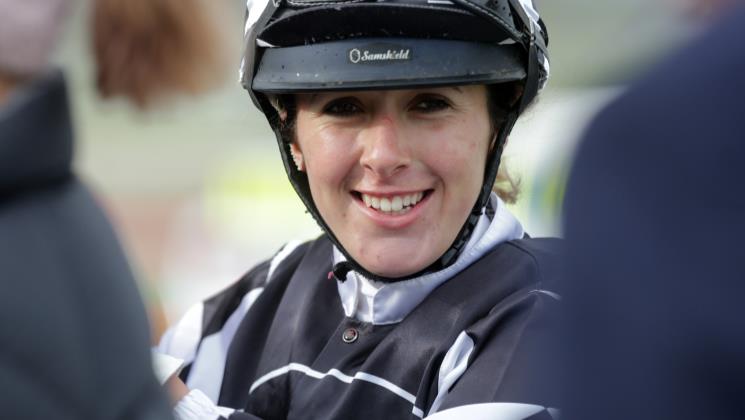 Riding a winner five months after giving birth is not a bad feat, and that’s exactly what Charlotte O’Beirne achieved at Wanganui on Thursday of last week.

The Central Districts apprentice guided the James Sweetensen-trained Liffey to a three-quarter length win in a 1600m maiden race, and O’Beirne was all smiles when saluting the judge on her return.

“It was very exciting, it is nice to be back,” she said.

“That was my second race day back and my seventh ride since returning. It was good to get that monkey off my back.”

O’Beirne returned to ride trackwork in March after giving birth to her and partner Keil Collins’ son Harry in December and she said her employers, Otaki-based Johno Benner and Hollie Wynyard, have been very supportive.

“I crept back into it (riding track work) in March, riding out of Johno and Hollie’s stable, which has been really good,” she said. “They have been fantastic in getting me going and helping me get fit.”

With former jockey Collins also working on race day as an assistant starter, as well as plying his trade as a fencing contractor, O’Beirne said family have been a godsend when it comes to childcare.

“We have got grandparents on speed dial at the moment,” she quipped. “Harry was with my Dad yesterday, and Keil’s mum looks after him quite a lot.

“We have got quite a few people who are happy to put their hand up and babysit him.

“It allows Keil and myself to work. We are very lucky in that respect and I am very fortunate with the stable that I am in that they are flexible and help when they can.

“Luckily he is a pretty cruisy baby, he is quite used to being dropped off and being picked up again. We are very lucky.” 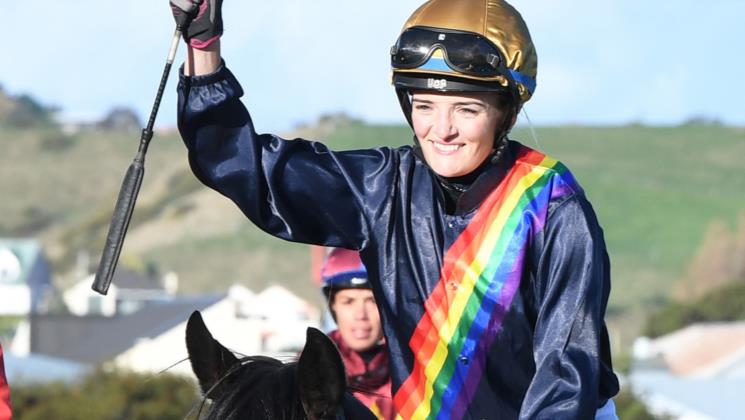 A delighted Charlotte O’Beirne brings Liffey back to scale after her comeback win at Wanganui last week.

The Collett-McKay household will be a bit empty over the coming month.

While Shaun McKay will be plying his trade in Melbourne over winter, his partner and fellow jockey Samantha Collett will head to the warmer climate of Queensland to partner a couple of familiar mounts.

“I am fortunate enough that Robbie Patterson and his owners have entrusted me with the rides on their two horses – Coventina Bay and Puntura.

“They are both meant to trial at Caloundra on June 1, and Coventina Bay’s aim is the Stradbroke (Group 1, 1400m) on the 12th and there is a Group 3 race for Puntura as well.”

While booked for the two mounts, Collett is also keen to pick up other rides in the Sunshine State.

“I think the horses will be based with Barry Baldwin, so I will try and ride as much outside work as I can and see what eventuates. I will try to make the most of my trip there.”