Hastings apprentice jockey Lily Sutherland is only relatively new to race-riding but she showed exceptional balance and composure when getting first starter Arbre Rouge home first in a 1600m maiden race at Hawera last Sunday.

The 18-year-old found herself in difficulties when her mount started to over-race in the middle stages of the race resulting in her saddle shifting forward with about 700m to run. She first lost the use of her right-side iron and elected to take her foot out of the left one soon after, going on to complete the race without the use of both of them.

Most jockeys would ease their mounts out of a race once they lose the use of their irons as they have very limited control. But Sutherland didn’t shirk the task and showed plenty of vigour as she kept her mount going to the line.

She managed to secure a rails run on Arbre Rouge rounding the home bend and never stopped kicking her mount in the straight, even wielding her whip every few strides, as she drove the filly to a three-quarter length win.

It was Sutherland’s second victory, the first coming aboard Shockproof in another 1600m maiden race at Hawera on April 27. Three days after that success she sustained concussion when she took a heavy race-fall at Wanganui which put her on the side-line for three weeks. She only gained her medical clearance to ride again late last week and was having her first day back at Hawera, where she also picked up a second placing on Happy Star.

Sutherland has been riding horses from a very young age and is indentured to the vastly experienced horsewoman Vicki Wilson, who operates a Hawke’s Bay property which has approximately 150 horses on it including thoroughbreds, show horses, stallions and others being rehabilitated.

Arbre Rouge is trained by Waverley’s Bill Thurlow who was full of praise for Sutherland after the win.

“What a special ride that was from Lily,” Thurlow said.

“We had been keen to secure her to ride the horse as I think she is one of the most promising four-kilogram claimers around and she delivered an absolute beauty.

“I know she has a very good mentor for her riding in Vicki Wilson, who employs her, but to get the win after losing your irons like that is quite exceptional.”

Thurlow wasn’t brimming with confidence before the race as Arbre Rouge had been unplaced in two barrier trials over shorter trips, but he had an inkling a step up in distance would suit the filly.

“She is a horse that hasn’t shown a lot at trials and jumpouts, but I liked the fact in all those outings she was always thereabouts and wouldn’t toss it in at the finish,” he said.

With the onset of winter racing Sutherland’s four kilogram apprentice allowance will prove very valuable and she is sure to be in keen demand from Central Districts trainers.

The Hastings training combination of Paul Nelson and Corinna McDougal kicked off the 2022 jumping season on a high last Saturday, winning two races at Trentham including the $60,000 Manawatu Steeplechase.

They saddled up Al’s Red Zed for a decisive 1-3/4 length win in the maiden hurdle race over 2500m before No Tip scored a runaway 8 length victory in the Manawatu Steeples.

The Nelson/McDougal stable is renowned for producing top jumpers, with Nelson saying that they have at least 12 horses being prepared for either hurdling or steeplechase assignments in the coming months.

They took three horses to Trentham last Saturday and also picked up a fourth with The Anarchist in the maiden steeplechase to go with their two wins while their promising hurdler Raucous finished second in a 2100m flat race at Hawera on Sunday and lines up in the restricted hurdle at Trentham today.

No Tip started a warm favourite in the Manawatu Steeplechase and only had three rivals in the 4000m event. The 10-year-old gelding was ridden to perfection by Hamish McNeill, who tracked the other favoured runner Magic Wonder all the way before sneaking up inside that runner entering the last 600m.

There was little between the two horses entering the home straight but No Tip forged ahead to jump the last fence clear in the lead and raced away in the final stages.

No Tip was recording his third steeplechase success and has also taken out two hurdle races among his six wins from 30 starts. He is owned by Paul Nelson and his wife Carol and they bred him out of the Grosvenor mare Grosveness, who has been a prolific breeder of winners including No Change (11 wins), Ho Down (eight wins), No Cash (seven wins), No Governance (three wins) and No Credit (two wins).

For Irish-born jockey Hamish McNeill it was his second win in the race after he took out the 2017 running aboard The Oysterman.

Al’s Red Zed suggested he could be a jumping star of the future with a strong win in the maiden hurdle race at Trentham.

The big Zed gelding was having his second start over fences. He well supported when making his hurdle debut at Hastings in July last year but mixed his jumping and was under pressure a long way from the finish before finally being pulled up by rider Shaun Phelan.

The same jockey was aboard the horse at Trentham last Saturday and Al’s Red Zed jumped a lot more confidently. He raced keenly in the trail in the early stages before settling much better going down the back straight.

Phelan saved ground by keeping Al’s Red Zed to the inside coming to the home turn and the horse quickly joined the leaders before taking the lead jumping the last fence and raced clear over the final stages.

It was Al’s Red Zed’s second win, his first coming in a maiden amateur riders’ race over 2200m at Te Aroha in August last year.

The seven-year-old is raced by his trainers Paul Nelson and Corinna McDougal along with Nelson’s brother David, McDougal’s partner Richard Fenwick and the Hawke’s Bay brothers Terry and Turei Haronga. 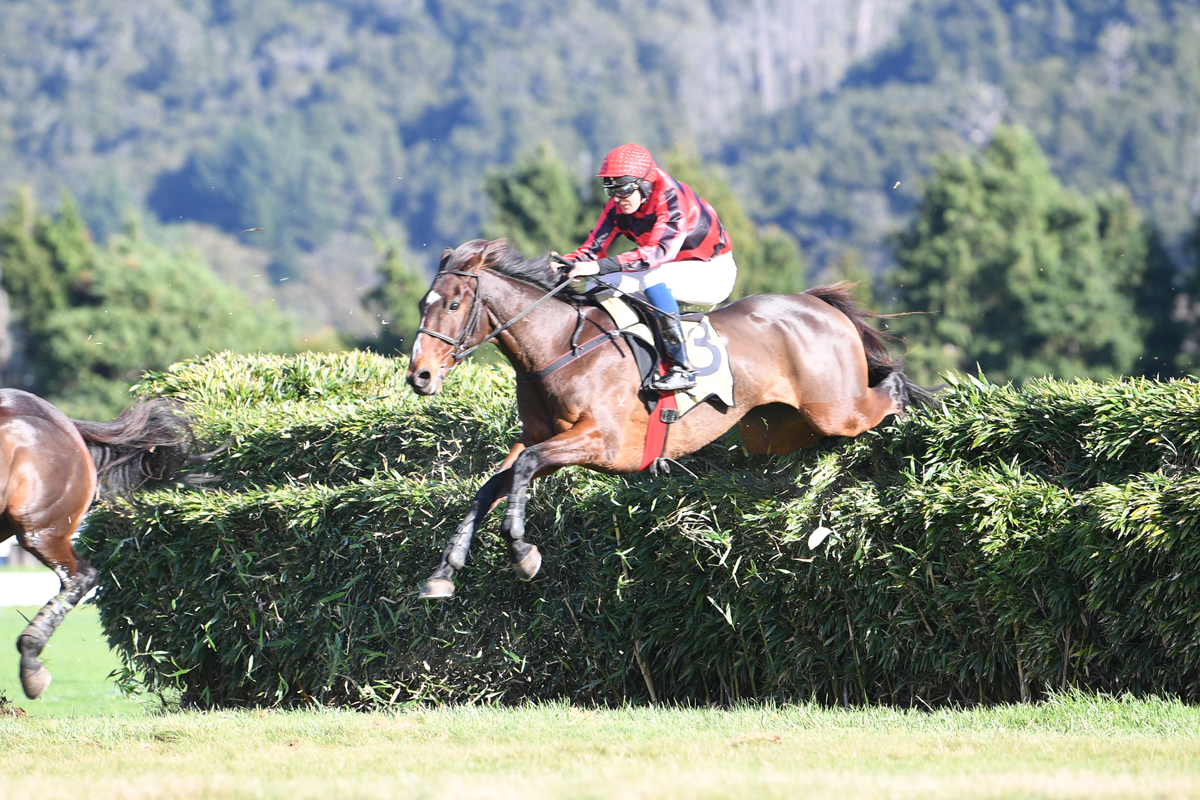 Hastings jumper No Tip clears one of the big fences in the figure-eight circuit at Trentham on his way to winning last Saturday’s Manawatu Steeplechase.

Exciting Hastings-trained three-year-old Wewillrock will now be turned out for a winter spell following his dominant victory at Te Rapa last Saturday and could be aimed at some of the country’s feature sprint races next season.

The El Roca gelding proved a class above his rivals in a $30,000 three-year-old race over 1100m at Te Rapa, despite still doing a few things wrong in the running.

After a tardy beginning, Wewillrock wanted to over-race in the early stages but jockey Jonathan Riddell managed to restrain him in the trail before letting him improve inside the leaders coming to the home turn.

The big chestnut hit the front early in the straight and Riddell only had to give him one flick with the whip before reverting to just hands and heels as the horse raced away for a 1-1/4 length win.

It was the gelding’s third win from only seven starts and he has also recorded three third placings, the most recent being in the Group 3 Cambridge Breeders’ Stakes (1200m) at Te Rapa on April 30 where he led and was run down late.

“He had visor blinkers on in the Breeders’ Stakes and was looking around a bit. I think it cost him running second,” co-trainer Guy Lowry said.

“We put normal blinkers on him last Saturday and it made all the difference.

“He’s still doing a bit wrong but it was a pretty good win and he showed the touch of class that he does have.”

Lowry is confident Wewillrock can measure up to the country’s top sprinters and also thinks the horse could excel over a bit more ground in time.

“He’s still learning and that’s why we have been patient with him.”

Lowry prepares Wewillrock with training partner Grant Cullen and the horse is owned by Waikato Stud’s Mark Chittick along with the Hawke’s Bay brothers Mark and Paul Apatu.

Hastings thoroughbred owner-breeder Chris Russell has sent two of his more promising horses across the Tasman to be trained by ex-pat Kiwis Trent Busuttin and Natalie Young.

Makbeel and Sedona were on a flight to Melbourne on Wednesday and have joined the Busuttin/Young stable at Cranbourne.

Makbeel is a four-year-old gelding by Mafi out of the Zabeel mare Donna Beel and had two starts from the Hastings stable of John Bary for two good third placings. He was unlucky not to win over 1600m at Wanganui last start, where he got back in the running and weaved a passage late to finish less than a neck from the winner.

Sedona was trained at Hastings by Dean Howard and is a three-year-old filly by O’Reilly’s Choice, who stands at Russell’s Hawke’s Bay property. She was well beaten on debut over 1400m at Trentham at the beginning of this month but had been a winner at the Waipukurau jumpouts before that.