The three premier days of racing held on the Hastings track in the spring have a new title sponsor and from this year will be known as the Colliers Spring Racing Carnival.

Colliers Commercial Hawke’s Bay has taken over the sponsorship of the carnival  and is keen to resurrect the important racing occasion to its glory days following the detrimental effects of Covid restrictions over the past two years.

It is the first time that the name Colliers Hawke’s Bay has been involved with Hawke’s Bay Racing but its Hawke’s Bay director Danny Blair and managing partner Simon Tremain are both keen racing supporters.

“We are first time sponsors of the Spring Carnival but Simon and I had a conversation and we both decided that this was such a big event for Hawke’s Bay that we had to get involved,” Danny Blair said.

“A lot of our clients have an interest in racing and we thought we would put our name to one of the biggest social events on the Hawke’s Bay calendar,” Simon Tremain added.

Tremains Real Estate has had a long term involvement with Hawke’s Racing, being a regular sponsor of races run by the club and also sponsoring the starting gates used on the Hastings track.

Simon Tremain has raced several horses over the years and is a former board member of Hawke’s Bay Racing while his late father Kel Tremain was a vice-president and long standing committee member of the former Napier Park Racing Club.

Danny Blair has become involved in racehorse ownership in recent years and has a share in the Hastings-trained King Farouk, who has recorded a win and seven minor placings from 22 starts.

He said: “Colliers Commercial Hawke’s Bay is the market leader in commercial and industrial property in the region.

“Our ethos is to accelerate the success of our clients, and the Colliers Spring Racing Carnival offers us the platform to celebrate both our brand and the network we’ve fostered over the years.

“The carnival has always been a key part of the Hawke’s Bay events calendar. It offers Colliers a great way to give back to our key clients at the same time as getting behind the sport of kings.”

Simon Tremain said he, along with Danny, are keen to not only be a fresh sponsor of the important Hawke’s Bay racing occasion but also intend to be involved long term and want to try and bring the carnival back to its full potential for racegoers.

He said: “We are delighted to announce our title sponsorship of the Colliers Spring Racing Carnival in support of Hawke’s Bay Racing.

“Tremains has been a proud supporter of racing for many years – racing, rugby and real estate has been a positive triumvirate for us as a group.

“It’s fantastic we can continue our support through Colliers as part of our wider group of companies.

“We’re looking forward to a long relationship with the carnival and Hawke’s Bay Racing.”

Hawke’s Bay Racing chief executive Darin Balcombe said he was delighted a Hawke’s Bay-based company was taking over the title sponsorship and says all three days of the carnival will be given a major boost.

“We are looking to grow the first two days of the carnival and not just concentrate on the last day,” Balcombe said.

"We are very excited to launch the Colliers Spring Racing Carnival. The event goes from strength to strength and we feel that, in partnership with Colliers, we can continue to build on what is a must do event in Hawke's Bay."

Hawke’s Bay Racing chairman Eliot Cooper echoed Darin Balcombe’s comments saying: "The Board of Hawke's Bay Racing is extremely grateful for the support of Colliers Commercial Hawke’s Bay for our iconic spring carnival and look forward to developing a mutually beneficial long-term partnership, as together we showcase what makes Hawke's Bay great."

Australian-based Arrowfield Stud, in conjunction with members of the Hawke’s Bay group that owned and raced the outstanding race performer and now successful sire Dundeel, have taken over the sponsorship of this race.

Darin Balcombe said, in addition to being the title sponsor of the carnival, Colliers will also have its name on one of the important races on the first day.

The 18-year-old was on an ultimate high after kicking home her first winner at Hawera on Wednesday of last week but then came crashing to the ground in a nasty race fall at Wanganui three days later.

She was lucky to escape with just concussion when her mount Stumpy suddenly faltered and came down in the closing stages of the open 1360m race at Wanganui.

Sutherland was back at the Hastings track on Tuesday to help saddle up horses for her employer Vicki Wilson but will need a medical clearance to resume riding and expects to be away from the racetrack for at least three weeks.

“She was very lucky…it was a bad fall and it could have been a lot worse,” her boss Vicki Wilson said.

While obviously shaken by her first race fall Sutherland was still buoyant from achieving one of her life-long dreams, to ride a winner in a thoroughbred race.

The success came aboard the Kevin Myers-trained Shockproof in a maiden 1600m race at Hawera, with the four-year-old mare leading all the way to score a decisive 4-1/2 length victory.

It was Sutherland’s ninth race-ride and followed a close second aboard the same horse at Woodville on April 18. She had also recorded a fourth placing before that.

She said the pre-race plan wasn’t to lead but Shockproof jumped away from the barrier that well that she found herself two lengths clear at the end of the first 200m.

From there she rated the four-year-old mare well in front and let her run out to the middle of the track rounding the home bend to find the best footing before kicking her clear again.

“I didn’t want to lead but she was travelling so well. Once she got to the straight, she just kept kicking. She has got the biggest heart, she tries really hard,” Sutherland said.

Sutherland has been riding horses from a very young age but had nothing to do with racing until accepting a job with her riding mentor Vicki Wilson and moving south to Hawke’s Bay from her native Northland.

“I have always loved horses. I did pony club and then a lot of show jumping. That is how I met Vicki, when she was in Northland,” Sutherland said.

“I have known her since I was 12 when I was going out with my ponies to her place and she has been teaching me a bit about everything ever since.

“She moved to Hawke’s Bay and I moved down to work for her six months later.

“When she got a few racehorses, I really started to get interested (in racing) and it all went from there.”

Sutherland naturally progressed from riding trackwork to riding in jumpouts and trials, and she was immediately hooked.

“I have always loved racehorses, I just have never had much of a chance with them,” she said.

“When Vicki got them I was really excited and once I rode in my first jumpout I thought ‘this is what I want to do.”

Sutherland was pleased that her first win came aboard a horse trained by Wanganui’s Kevin Myers as she said he has been one of her greatest supporters.

“I went to his place for a day and it was great. He has been wonderful and has put me on his horses and taught me a lot.”

Sutherland said Hastings trainer Fred Pratt has also been a great help as he gave her regular trackwork rides when she first started out.

“I’ve also been going to the Palmerston North apprentice school where Kim Clapperton and Lisa Allpress have also helped me a lot and given me plenty of advice.” 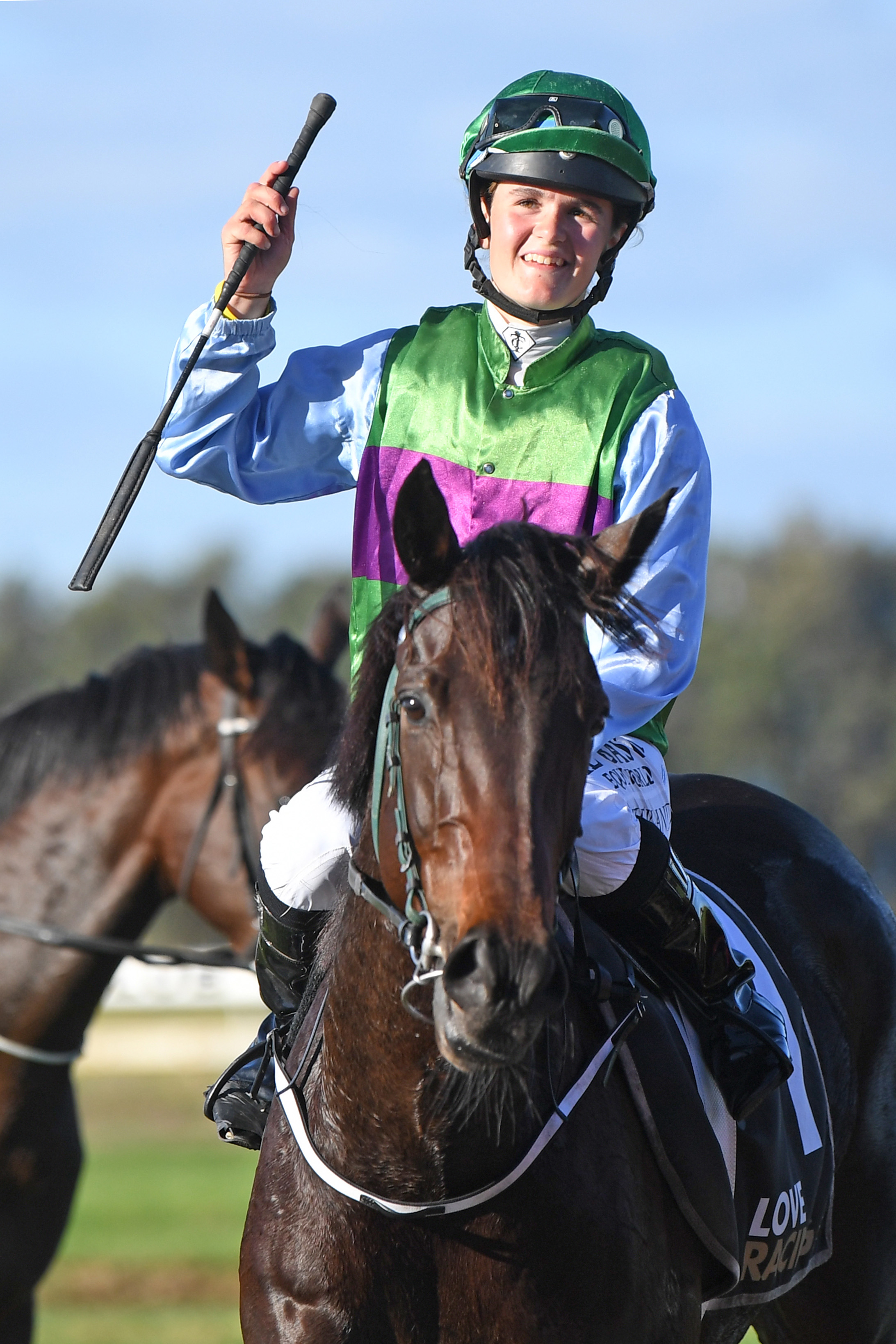 A happy Lily Sutherland salutes the judge aboard Shockproof after notching up the first win of her career at Hawera on Wednesday of last week.

Matamata-trained filly Bonny Lass showed just how tough she is when she overcame a wide trip in transit to deliver a comprehensive victory in the Group 3 $80,000 Cambridge Breeders’ Stakes (1200m) at Te Rapa last Saturday.

The Graham Richardson and Rogan Norvall prepared daughter of Super Easy was forced to race three-wide for the entire race yet still had plenty left when rider Craig Grylls moved her up to challenge the leaders rounding the home bend before she charged away from the opposition in the final stages to win by 1-1/4 lengths.

She is raced by her breeder Sandy Moore along with Brent and Wendy Cooper and the Social Racing Starting Gates Syndicate, with Hawke’s Bay woman Bronwyn Butler one of the members of that syndicate.

Co-trainer Graham Richardson said Bonny Lass is best when her races are spaced and her main target next season will be the Group 1 Railway Stakes (1200m) on New Year’s Day.