Being a jockey under Covid-19 restrictions is not easy…just ask Hawke’s Bay’s Kate Hercock.

The 42-year-old is hell-bent on resurrecting her successful riding career and is making a great fist of it, with six wins in the past three weeks. But it has also been a lonely ride, with her having to travel thousands of kilometres by road to do it.

Hastings-born Hercock, who has kicked home more than 250 winners in New Zealand and another 20 in Macau, broke both arms in a nasty race fall while in Macau which led to her giving up race-riding for several years. But she has come back with a renewed enthusiasm and has to be admired as she juggles a jockey career with training a small team of horses from her Otane base.

When I phoned her at just after 8pm on Tuesday I knew the conversation had to be brief as she was yawning on the phone and had to be up at 4.30am the next morning to get her horses worked.

She would have liked to have been able to fly from Napier to Hamilton on the Monday but, with the Hamilton area under Covid-3 restrictions, she was unable to get a flight home that day or stay overnight and catch a flight home the next day.

“It is hard under the restrictions. We are travelling huge miles by road just to get to race meetings,” she said.

Hercock was rewarded with a winning double at Woodville last Friday and another success at Matamata the following day. She also picked up a win at Awapuni on October 8 and another double at Tauherenikau on October 17.

In addition the talented rider also brought up the sixth black type success of her career when kicking home Soldier Boy to victory in the Listed $60,000 Wanganui Guineas (1340m) on September 4.

While Hercock says the constant travel is hard on the body and mind it is all worthwhile if you are getting the wins on the board.

Hercock’s two wins at Woodville last week gave her great satisfaction as they were on horses trained on the Woodville track by Shane Brown.

“Loyalty is a big thing for me. If people support me I’ll support them and Shane and his wife Amy have been my most loyal supporters since I’ve come back so it was great that was able to reward them,” she said.

Hercock decided she wouldn’t ride at New Plymouth yesterday but will be back in action at Awapuni today.

“I pulled the pin on going to New Plymouth as it was going to be too much. I only had a couple of rides and travelling over there is like going to the other end of the world.”

She travels on her own by car mostly but did have Palmerston North’s Kim Clapperton as a companion and co-driver when she went to Trentham last Sunday.

Hercock was seen at her best when getting Rua Rocks home first in a Rating 65 race over 2000m at Matamata last Saturday.

She took an early lead on the horse and dictated the pace before trying to put a break on the field rounding the home turn.

Rua Rocks looked beaten when challenged by eventual second placegetter Primo Stella early in the home straight but Hercock managed to lift her mount in the final stages to wrest back the lead and win by a nose.

Hawke’s Bay couple Graham and Isabell Roddick’s decision to buy back into the family of multiple Group 1 winner Rough Habit looks like paying dividends after Flying Habit’s dominant all the way win at Woodville on Friday of last week.

Isabell Roddick bred Rough Habit, who is by Roughcast out of Certain Habit. She sold him as a young horse and he won six of his first nine New Zealand starts before going on to be champion performer on both sides of the Tasman.

Rough Habit ended his career with 29 wins, 16 seconds and seven thirds from 74 starts. Eleven of his victories were at Group 1 level, including two Stradbroke Handicaps and three Doomben Cups in Brisbane.

The Roddicks have bred a number of other horses from Rough Habit’s family but things were starting to dry up until they were drawn to a mare going up for auction at a sale in Melbourne.

The horse was On Eagle Wings, an unraced daughter of Danasinga whose dam Rich Addiction was a half-sister to Rough Habit and by top Australian stallion Last Tycoon.

The mare was in-foal to Australian-based sire Bullet Train and Graham Roddick recalled this week that he and Isabell thought the mare would probably be out of their price range.

“But when she went into the ring they lost all power to the sale complex and we were able to get her for $A3600,” Roddick said.

Flying Habit was the resultant foal and the Roddicks got a group friends together to help in the ownership and she is now raced by the Eagle Wings Syndicate.

“There are 10 shares in the syndicate, with four individuals. There are two other Hawke’s Bay people involved in Barbara Nonu and Les Manley and most of the rest live in Wellington and Cambridge,” Roddick added.

Flying Habit was having her ninth start when she lined up in a 1600m maiden at Woodville last week with her previous best placing being a second over 1600m on a heavy track at Otaki in September last year.

She hadn’t raced since June but trainer Fraser Auret turned her out in top condition and instructed apprentice Ashvin Mudhoo to get her to the front and don’t look back.

Mudhoo followed the instructions to the letter, bouncing the mare out well from the barrier to take an early lead. He then kicked her clear rounding the home turn and the others never looked like catching her, the winning margin at the line being 3 lengths.

“She is a mare that was always going to take time but Fraser holds her in high regard and hopefully she can go on with it now,” Roddick said.

The Roddicks have bred two others out of On Eagle Wings since Flying Habit. The first was a filly by Shocking called Itza Habit, who was sold to a Christchurch buyer but is so far unraced.

The Roddicks now have a filly foal out of the mare by Embellish, a Group 1 winning son of Savabeel. 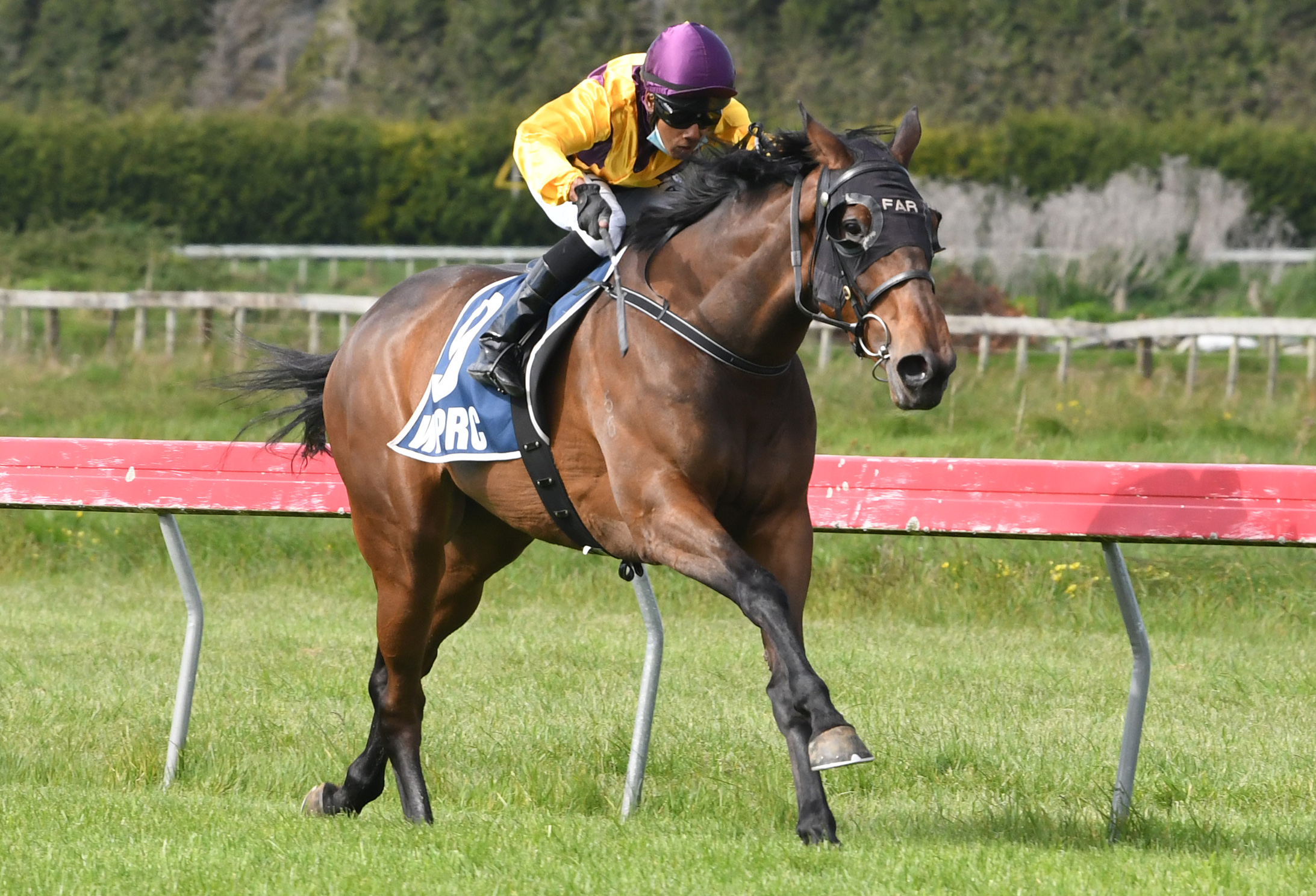 Uncertainty regarding alert levels has resulted in the Board of New Zealand Thoroughbred Racing once again moving to a virtual format for the Horse of the Year awards.

The 2021 awards, which were originally scheduled to be held at Claudelands in September, had already been pushed back to November 21. However, when last week’s government announcement provided no real clarity around when such events might be able to be held, the Board was left with no alternative than to plan a virtual format.

A statement from the NZTR Board said: “We are determined to acknowledge the achievements of our industry participants during the 2020-21 racing season with a virtual event. Accordingly, NZTR is currently in discussions with out major event partner SENZ to decide the exact format this year’s event will take.”

“NZTR recognises that this is disappointing for finalists to celebrate with their peers—especially as it is the second year this has happened. However, the unpredictability as to when we might be able to congregate in large numbers at an event made this the only sensible decision.”

The Ticketing outlet ITICKET will be in touch with those who have already purchased tables in due course to organise refunds. As there have been several cancellations and postponements they do ask for patience.

Probabeel beaten by the weather

Trainer Jamie Richards admits he hasn’t had a lot of luck with star mare Probabeel and her bid for another Group 1 success in last Saturday’s Cox Plate was once again thwarted by rain on the day.

The four-time Group 1 winning daughter of Savabeel looked a solid chance in the 2040m iconic weight-for-age event but, with rain that fell steadily during the day turning the track in favour of those who relish a rain-affected surface, her chance to shine was severely reduced.

Typical of her fighting nature, Probabeel battled hard all the way but finished a well beaten fifth behind European raider State Of Rest.

Similar circumstances had seen her 2020 attempt on the race end in the same way, while her bid to win the $A5million All Star Mile (1600m) back in March was also hampered by rain, leaving her record at The Valley track a damp and miserable zero from three.

“As soon as the rain came it was game over pretty much,” Richards said.

“We were actually tossing up about late scratching her, but as the track wasn’t downgraded during the day, we had no option but to go around.

“I thought she was very brave, but when Brett (Prebble) let her head go at the 600m she was just spinning her wheels from then on.

“We will now take a few days and see how she is before we make any further decisions with her.”