Hastings trainer John Bary reckons he has nothing to lose by sending his stable star Callsign Mav to Melbourne for a crack at the Group 1 $A5million Cox Plate at the famous Moonee Valley track on October 23.

The Atlante gelding confirmed his one-way trip across the Tasman with another gutsy win in last Saturday’s Group 1 $220,000 Windsor Park Plate on the second day of the Bostock New Zealand Hawke’s Bay spring carnival.

“He’ll have a gallop here on Saturday (today) and he flies out on Wednesday,”’ Bary said this week.

“He’ll have a canter around at the Valley track on October 16 and then have a gallop there at the Breakfast For The Stars morning the following Tuesday and that will be it.”

Bary is under no illusion as to the opposition Callsign Mav is likely to come up against in the Cox Plate but is also philosophical about lining the horse up in what is regarded as the Southern Hemisphere’s greatest weight-for-age race over 2040m.

“He’s paid his way now with his last two wins so he’s got nothing more to prove in this country,” Bary said.

“We might as well see how he measures up against the really good ones in Aussie.”

Plans are for Callsign Mav to enter the Flemington stable of Danny O’Brien who will initially be a caretaker trainer for the horse while he will still race in John Bary’s name when he contests the Cox Plate.

“Under the current rules over there if you are training outside Victoria and wanted to have a horse transferred to Melbourne you can only have a trainer there taking up a 14 day caretaker role.” Bary said.

“But with us flying the horse over on October 13 he will only be in Danny O’Brien’s stable for 10 days under my name and then he will be transferred over to him so there is not a problem.”

Bary said he is still working on securing a suitable Australian jockey to take the Cox Plate mount, with Covid-19 restrictions making it impracticable for Callsign Mav’s regular New Zealand jockey, Jonathan Riddell, to travel to and from Australia in the coming weeks.

Bary owns a  10 per cent share in Callsign Mav with the remaining six owners in the horse all living in Victoria, Australia.

While Bary sees the Cox Plate as Callsign Mav’s main spring target he said there is an abundance of other races for the horse over the Melbourne spring carnival.

“There is the Mackinnon Stakes at Flemington on November 6 worth two million dollars and plenty of other options,” Bary said.

“It will be up to Danny as to where he wants to run him. I’ll just be a silent owner.”

Bary said the cost of flying Callsign Mav to Australia is approximately $6000 while nomination and acceptance fees to get a start in this year’s Cox Plate amount to just over $68,000.

Callsign Mav took his stake earnings to $566,050 when recording his third Group 1 victory at Hastings last Saturday and now boasts a record of seven wins, six seconds and two thirds from only 19 starts.

He has been a wonderful investment for his connections as he cost only $3000 at a 2017 Karaka mixed bloodstock sale.

The five-year-old’s great fighting qualities were again clearly evident in last Saturday’s 1600m Hastings feature as he repelled a stern challenge from Prise De Fer in the final stages to win by half a length.

The pair had the finish to themselves with third placed Gino Severini a further 1-14 lengths back.

“He doesn’t win by much but at the end of the day he’s won,” an elated Bary said.

“He is really tough and just grinds it out when the pressure goes on.”

Winning jockey Jonathan Riddell said he wanted to be positive from the start and so he bounced Callsign Mav out smartly from a midfield draw and quickly got him across to sit outside the leader Tappy’s One.

“He just purred along and then did what he does as he put his head up and gawked around.

“When you get at him, he puts his head down again and nothing much is going to get past him.

“I was a little worried when I saw Prise De Fer coming, but knowing the horse and knowing John and his team had said he was better than day one, I was pretty confident.”

Bary believes Callsign Mav only does as much as he has to when it comes down to fighting out a finish and thinks the horse will lift to another level when he meets even better opposition.

Last Saturday’s success was Bary’s 12th at Group 1 level and Riddell has been the winning jockey in eight of those wins. 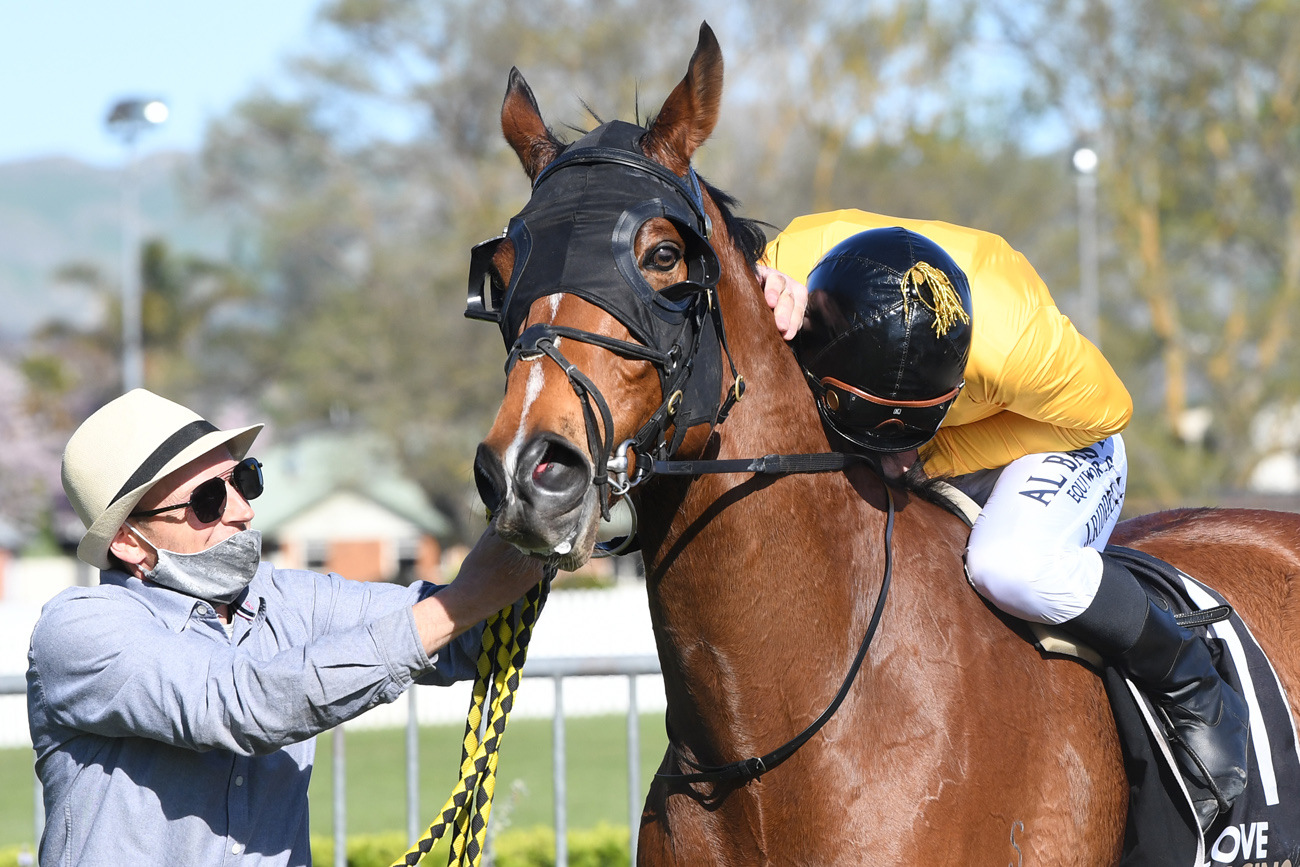 Jonathan Riddell gives Callsign Mav an affectionate hug as they return to the winner’s stall.

The Cossack a hurdling colossus

The special accolade certainly seemed fitting as the eight-year-old not only lumped 70.5kg in completing back-to-back wins in the gruelling 4200m feature but he has also swept all before him in the past 12 months, adding victories in the Waikato Hurdle (3200m), Wellington Hurdle (3100m) and Grand National Hurdles (4200m).

The Cossack became the first horse in 14 years to record consecutive Great Northern Hurdles victories, the previous being Just Not Cricket in 2006 and 2007.

Coincidentally both horses were prepared from the property of Hastings trainer Paul Nelson, who saddled up Just Not Cricket on his own but has been in a training partnership with Corrina McDougal for the past two years.

Formerly a tearaway leader in his jumping races, The Cossack has now learned to settle and is an exceptionally good jumper.

Jockey Shaun Phelan positioned the horse in third place in the early stages of last Sunday’s race and saved every inch of ground by hugging the inside rail.

The Mastercraftsman gelding put in some clever economical jumps and was always able to get away from the fences quickly. He improved to second coming to the home turn and then hunted down the leader Dr Hank with three obstacles to clear.

The Cossack took the lead jumping the second last hurdle and surged clear after clearing the last to win by 4-1/4 lengths from Dr Hank, with 6-1/2 lengths back to third placed Aigne.

Paul Nelson was recording his fifth win in the race after also producing Chibuli to win in 2002. He has also racked up a number of minor placings in the event in recent years, with Ho Down runner-up in 2009; Solid Steel finishing second in 2010 and third in 2011; King’s Deep second in 2013; Second Innings second in 2018 and No Tip third in 2019.

Nelson was exceptionally proud of his latest star jumper as he reflected on Sunday’s victory.

“He is a magnificent jumper and I guess that shows with the win today,” he said minutes after the race.

“We just weren’t sure if he could carry that sort of weight and on a track where they were pinging along a bit, but we had to give it a try.

“I thought he was in a good spot and handy enough if he could manage the weight. Shaun let him come with the one run and that proved the winning of the race.”

The Cossack has now been turned out for a well earned spell with Nelson undecided on how he will tackle a programme for his charge next season.

“What I do know is that he has a pretty hard case bunch of owners back home and they will be celebrating and making all sorts of weird and wonderful plans I would think.”

The Cossack is owned by Nelson in partnership with three other Hawke’s Bay men, Peter Grieve and his son Doug and close friend John Frizzell.

The horse was bred and originally owned by Grieve’s brother Ivan and won two flat races from the Hastings stable of John Bary before changing hands for $30,000. He has since won another eight races and more than $275,000 for his new connections. 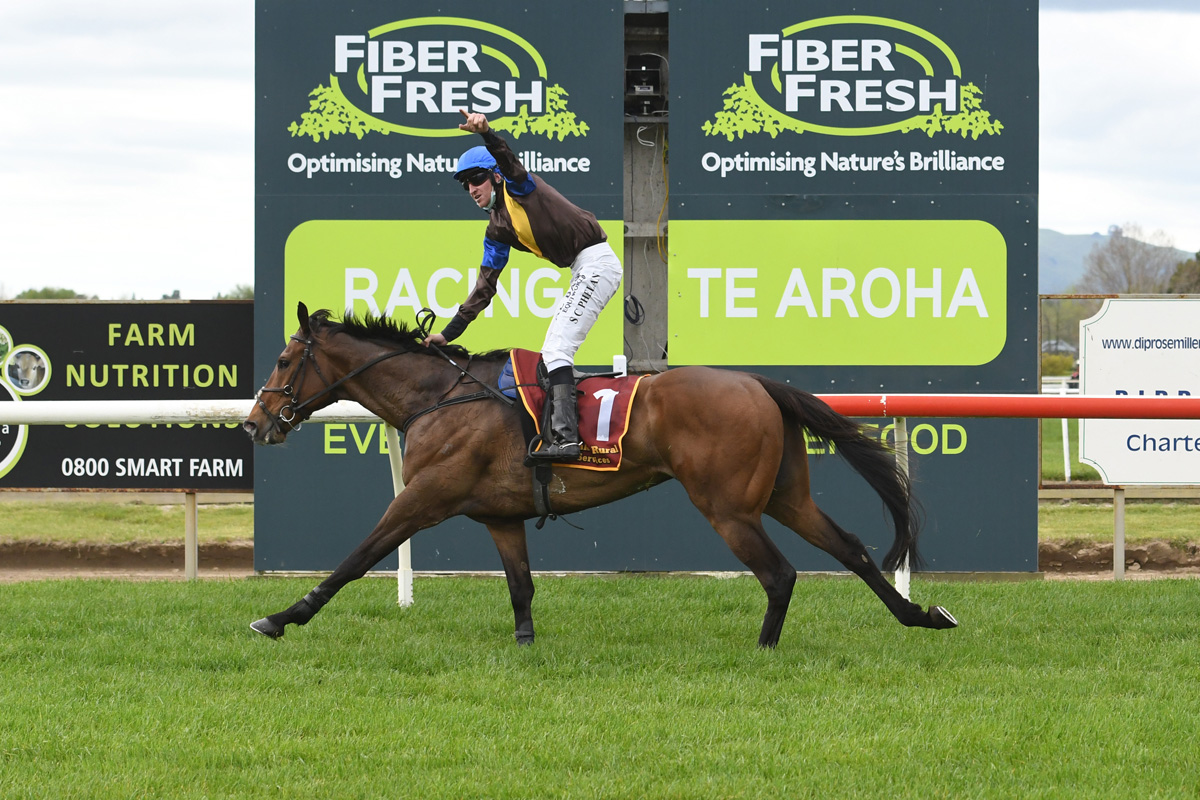 Jockey Shaun Phelan stands high in the irons and gives a victory salute as The Cossack crosses the line a dominant winner in last Sunday’s Great Northern Hurdle.

Le Grazie is starting to prove a bargain buy for his Dannevirke owner-trainer Barry Beatson, even if it has taken a long time for the horse to reach his full potential.

The big seven-year-old was having only his fifth start when he chalked up his second win with a game performance in a $40,000 Rating 65 race over 2100m at Hastings last Saturday.

Beatson bought the son of Zacinto for just $1500 at a 2015 Karaka mixed bloodstock sale and the horse showed instant ability by recording a win and a second in two trials and then a debut win over 1400m at Hastings in May 2019, when prepared by Cambridge trainer Samantha Logan.

Le Grazie never raced again until July this year when unplaced over 1400m at Hastings. He then finished fourth over 1800m at New Plymouth before being freshened again and was sent out favourite for last Saturday’s race after an unlucky sixth over 1600m on the first day of this year’s Bostock New Zealand Hawke’s Bay spring carnival.

Jockey Troy Harris positioned Le Grazie fourth on the fence in the early stages last Saturday and just bided his time before angling him out at the top of the home straight. The big striding gelding then kept up a grinding finish to get up and run down the pacemaking Sagunto by a head.

Le Grazie is out of the unraced Don Eduardo mare Khales and a half-brother to La Mouline, who was stakes placed from a limited racing career.