The effervescent Lawrence considers herself a small-time trainer but reckons she has struck gold by sorting out and purchasing bargain buys from the popular sales outlet.

“I’ve got three horses racing at the moment and they are all Gavelhouse purchases,” Lawrence said this week.

Lawrence ventured north with two of those horses last week and both were successful. The first was Sharky, who chalked up his first win at his second start in a $12,000 maiden at Matamata on September 1. The second was Real Slim Tradie, who resumed from a lengthy spell with an impressive fresh up victory in a $30,000 Rating 65 race at Te Rapa last Saturday.

Sharky cost Lawrence and her husband Steve only $1800 on Gavelhouse while Real Slim Tradie, who is now the winner of two races, was a $4500 purchase.

The other horse Lawrence has ready to line up again on race day is the open class galloper Pep Torque, who has now won seven races and was purchased for just $2600.

Lawrence is now looking to start all three horses at next Saturday’s first day of the Bostock New Zealand spring carnival at Hastings and is proud of the fact that all three will be guaranteed a start on a premier race day, where the minimum stake is $40,000.

Sharky will contest the Special Conditions Maiden over 1200m, Real Slim Tradie will line up in either the Rating 74 1200 or the Rating 65 1300 while Pep Torque will resume in the Open 1600.

Lawrence not only has an eye for a bargain but she also seems to have a knack of turning a horse’s behaviour around.

Sharky is a classic example. The Burgundy four-year-old gelding was unraced and had earned the tag of being a barrier rogue when Lawrence took him on.

“Allan Sharrock trained him first and he had one trial for him for a good second at Otaki before he was sold,” Lawrence recalled.

“He went north to Mark Fraser-Campin’s stable at Cambridge for an Asian owner but he gave him two trials and he stood in the gates and refused to leave the barrier both times.”

Lawrence thought that if the horse had shown so much promise in his first trial he was worth giving another chance so when he was offered on Gavelhouse and passed in she negotiated with the horse’s connections and managed to get him for $1800.

Once she got Sharky home to her Waipukurau base she had a chiropractor go over the horse and said he found him to be sore all over.

“So we just worked on getting him right which is why he never raced for another two months,” Lawrence said.

Sharky finished sixth in his race debut over 1200m at Hastings in July but then won a 1000m jumpout at Waipukurau on August 11 and had another jumpout at Levin to help fit him for last week’s return.

The horse settled a clear last in the early stages and Lawrence said that was because apprentice jockey Elen Nicholas had forgotten to put her goggles on at the start and was therefore visually impaired once the race started.

Both horse and jockey looked under pressure coming to the home bend but once Nicholas managed to get the horse out in the clear he picked up the bit and charged home to win by 1-1/4 lengths.

Sharky is raced by Lawrence and her husband Steve along with their stable employee Susan Best and close friends Dion and Chel Adams. All of them live in Hawke’s Bay.

Lawrence has always had a high opinion of Real Slim Tradie, so much so that when the horse cleared maiden ranks over 1300m at Hastings in November last year she decided to tackle black type races with him.

He lined up in both the Group 3 Wellington Stakes (1600m) and Group 2 Wellington Guineas (1400m) and, although well beaten in both, his trainer knew he was still a bit weak and immature then and was confident he would improve with time.

“He is just under 17 hands high and needed to build into his frame. He has done that now and is a much stronger horse,” Lawrence said.

Real Slim Tradie was having his first start for six months when he stepped out over 1200m last Saturday but had been given three jumpouts to prepare him and had won all three.

“We thought he would go all right because he has always gone well fresh but he was up against a pretty good field and had drawn wide so we weren’t sure,” she added.

Jockey Trudy Thornton positioned Real Slim Tradie midfield in the early stages but couldn’t get in any closer than three-wide for the entire race. She let him slide up to join the leaders coming to the home turn and he hit the front soon after before staving off the challengers to win by three-quarters of a length. 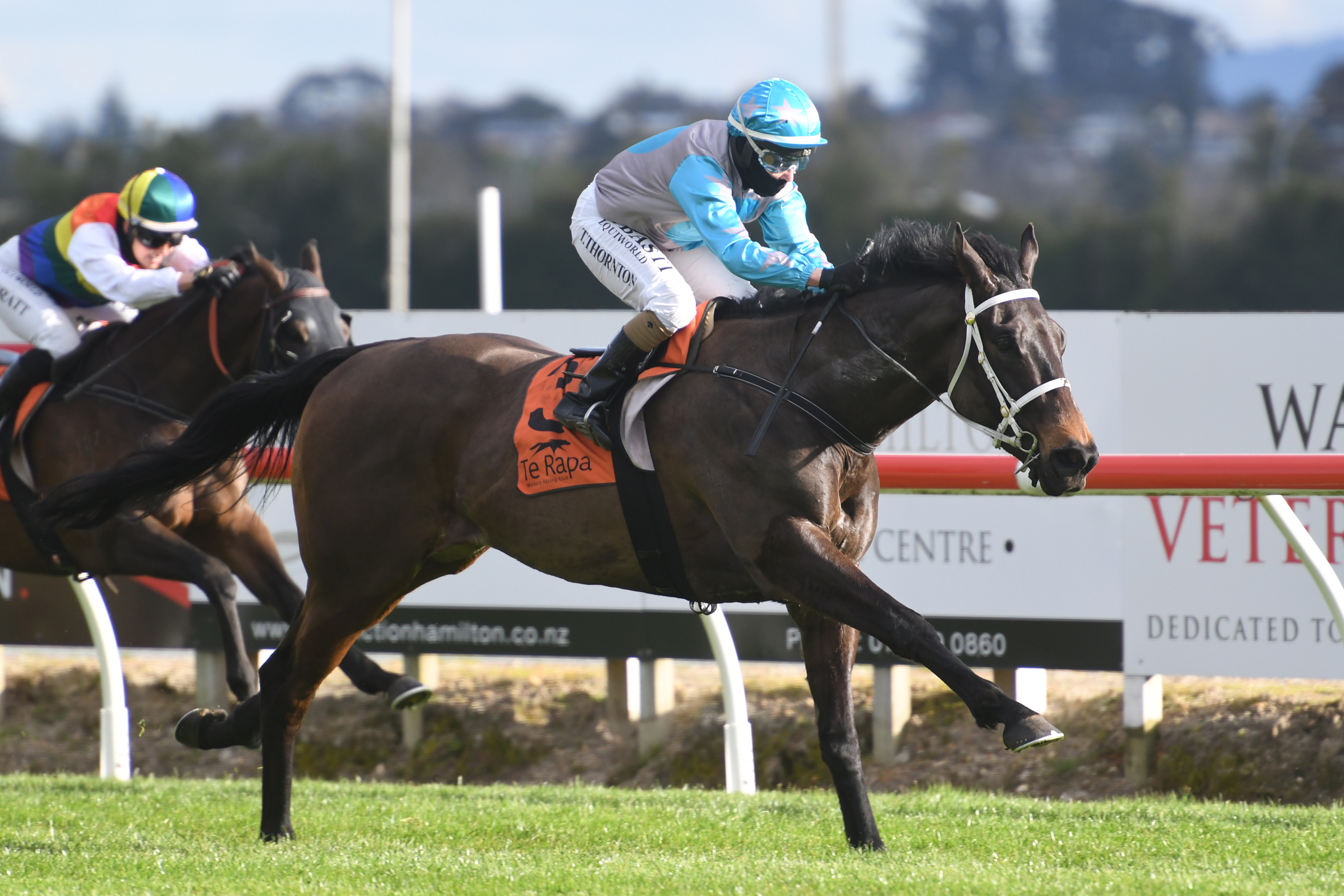 Real Slim Tradie is at full stretch under the urgings of jockey Trudy Thornton as he holds out his rivals for a three-quarter length win at Te Rapa last Saturday.

Hawke’s Bay Racing has come up with a couple of initiatives to raise money for the Hawke’s Bay Cancer Society at next Saturday’s first day of the Bostock New Zealand spring carnival.

In the past the club has donated all gate takings to the society but, with Covid-19 restrictions likely to apply on the day, the club has had to look at other avenues.

A Punters Club will now be run on the day. It has been called the “Hawke’s Bay Racing Daffodil Day Punters Syndicate” and tickets will be sold via the TAB website from early next week.

A guest selection panel comprising of commentator and form analyst Bruce Sherwin, Waikato Racing Club CEO Butch Castles and the Boys’ Get Paid Team will be entrusted to invest the pool of money on all Hawkes Bay races on the day as well as selected races from Riccarton.

HB Racing will donate 9.5% of the on-course turnover generated by the syndicate to the Hawke’s Bay Cancer Society and, hopefully, there will also be a profit for the syndicate as well.

The TAB will also donate $2000 to the Hawke’s Bay Cancer Society for every horse that wins a race wearing the special Daffodil colours, which will be allocated to one horse in each race at Hastings.

Three in a row for Trosettee

Promising stayer Trosettee made a gigantic step up when he downed several well performed open class gallopers in a $40,000 race over 2040m at Wanganui last Saturday.

The five-year-old gelding, raced by a group of Hawke’s Bay people, was recording his fourth win and his third in a row. It followed a Rating 65 victory over 1650m at Hastings in July and another in the same grade over 1600m at Woodville last month.

He was only rated on 69 points when he lined up in last Saturday’s open handicap, with most of his rivals rated at least 20 points higher including the Group race winner Dolcetto and 2019 Wellington Cup victor Gorbachev.

Ridden by talented apprentice Wiremu Pinn, Trosettee took up a handy position from the outset and surged to the front starting the last 600m. He opened up a break on the field at the top of the home straight and kept up a strong run to the line to score by 1-3/4 lengths.

Trosettee is owned by his Masterton trainer Grant Nicholson who bought him for only $5000 at the 2018 Karaka yearling sales.

Nicholson races the horse with Hastings couple John Flynn and Greta Flynn along with their daughter Sam, Faye Flynn, John and Sharon McKay and Derek and Ann Mackenzie.

No Tip adds another narrow win

A perfect ride by comeback jockey Craig Thornton proved the key to success for Hastings-trained jumper No Tip in the $20,000 open steeplechase at last Sunday’s Te Aroha meeting.

Thornton is one of this country’s most decorated jumps jockeys, kicking home the winners of many of New Zealand’s feature jumping races before fulfilling a successful career in the United States.

The 55-year-old decided to give race-riding away several years ago, concentrating on training for a time, but decided this year to try his luck again in the saddle.

He not only won the open steeplechase at Te Aroha last Saturday but also took out the maiden steeplechase on Tommyra and has now chalked up four wins from only six rides since returning.

No Tip proved to be a lucky pick-up ride for Thornton as Shaun Phelan was originally booked for the mount but notified stewards on the morning of the races that he was unwell and would not be attending the meeting.

Thornton settled No Tip in the first four of five in the running but, more importantly, save every inch of ground by staying close to the inside and cutting the corners wherever he could.

No Tip raced up to join the pacemaker Zartan with two fences to jump and the two horses went to war over the final stages, with No Tip just managing to hold out his rival by a nose.

No Tip is trained by Paul Nelson and Corrina McDougal and bred and owned by Nelson in partnership with his wife Carol.

The 10-year-old is now the winner of four of his 12 jumping starts, two over steeples and two over hurdles.