Star Hastings galloper Callsign Mav is booked on a flight to Australia on October 13 for a crack at the $A5million Group 1 Cox Plate 10 days later and is then expected to do his future racing in that country.

The John Bary-trained five-year-old called on all his courage and ability to claim back-to-back wins in last Saturday’s Group 1 $220,000 Tarzino Trophy at Hastings and, providing he performs well in his next assignment, he will head across the Tasman.

Bary, who prepared Jimmy Choux to finish runner-up behind Pinker Pinker in the 2011 Cox Plate (2040m), is keen to test his latest dual Group 1 winner against the best in Australasia’s greatest weight-for-age event.

“He’ll come back here (Hastings) and run in the Windsor Park Plate and, providing he goes well again, he’ll head to the Cox Plate,” Bary said.

“He’ll race under my name in the Cox Plate but, after that, he will go into Danny O’Brien’s stable in Melbourne and that’s where he will race from then on.

“He might as well race for much bigger money over there than what he will race for in this country.”

Bary is now trying to organise a suitable Australian-based jockey to ride Callsign Mav in the Cox Plate with Covid-19 restrictions making it near impossible for the horse’s regular jockey, Jonathan Riddell, to travel to and from Australia in the coming months.

“We are looking at a couple of jockey options at the moment but nothing has been confirmed at this stage,” Bary said.

Bary is happy with the way Callsign Mav has come through last Saturday’s tough win, on a slow track that wasn’t desirable, and is hoping for some drying weather before next Saturday’s Group 1 $220,000 Windsor Park Plate (1600m) on the second day of the Bostock New Zealand spring carnival at Hastings.

It is a race the horse finished third in last year behind the class mares Melody Belle and Avantage.

Callsign Mav scored a huge upset when winning at odds of 81 to one in last year’s Tarzino Trophy but was sent out a $3.40 favourite for last Saturday’s 1400m feature.

It took a forceful ride from jockey Jonathan Riddell to get the Atlante gelding home for a head victory over Spring Tide after he had to do plenty of work in the running.

The two horses had the finish to themselves with third placed Masetto being 4-1/4 lengths behind them and just a nose in front of fourth placed Gino Severini.

It was Riddell’s 13th Group 1 victory but one that also cost him a suspension of eight riding days.

Callsign Mav drew an outside barrier and was four-wide contesting the lead going into the bend at the 900m. Riddell said later he had no option but to break the rules to get across and take up the running.

“I was stuck out there and they kept on kicking up inside me,” Riddell said.

“I thought I’ve done enough work out here so I kept going forward (to get the lead) and unfortunately that meant tightening them up.”

Riddell admitted a charge of careless riding in that he permitted Callsign Mav to shift inwards when not sufficiently clear crowding Frontman, Supreme Heights and Harlech.

After considering submissions the Judicial Committee suspended Riddell from the conclusion of racing last Saturday up to and including racing on Friday, October 1, and also fined him $1200.

Although disappointed Riddell took the sentence on the chin knowing that the time out means that at least he will be back to team up again with Callsign Mav in the second leg of the Hawke’s Bay Group 1 triple crown, at Hastings next Saturday.

“He is so tough,” Riddell said of Callsign Mav.

“They all made me work in the running from where I was and, near the finish, he couldn’t see the second horse coming but he was just too tough.

“It’s just amazing and he has matured and is now one of the big boys.”

Last Saturday’s victory was especially significant for Bary, who owns a small share in Callsign Mav and the horse was carrying his stable colours to victory in a major race for the first time.

“This is my 11th Group 1, but the first in the yellow colours, so that makes it pretty special.” he said.

The yellow colours and black cap were made famous by Bary’s great-great grandfather George Gatenby Stead, a New Zealand hall of fame inductee, and later carried on by his great-uncle Bob Stead. They have been carried to success in most of New Zealand’s prestige races as well as many in Australia. 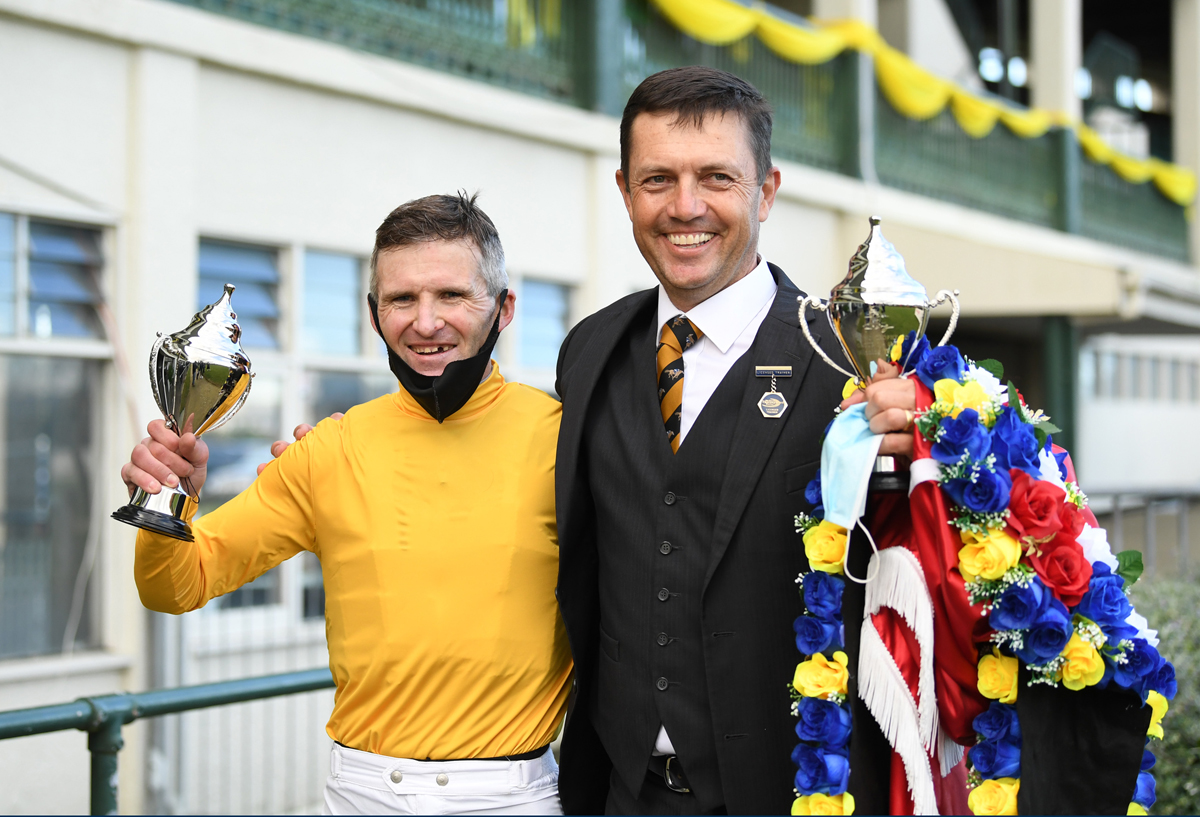 Hot Shockolate, who is raced by several Hawke’s Bay people, registered her second win from only nine starts with a decisive victory in a Rating 65 race over 1100m at Otaki on Thursday of last week.

The Shocking four-year-old is trained at New Plymouth by Bryce Revell and raced on lease from Rich Hill Stud.

Revell and another Taranaki man, Roger McDonald, both have a racing share along with three Hawke’s Bay men, Ken Robson, Bryan Godber and Kelvin Bland and Robson’s two daughters, Charon and Lisa.

Ken Robson has had shares in several other horses in the Revell stable, including the three race winner Secret Squirrel.

Hot Shockolate is building a good record with two wins, three thirds and a fourth from her nine starts.

“She is pretty consistent and tries hard,” Ken Robson said.

“Her mother Shahbab won six races but didn’t get further than 1300 metres but the jockeys that have ridden this horse think she’ll get over a bit more ground,” he added.

Promising apprentice Callum Jones was the winning rider aboard Hot Shockolate last week and his 3kg allowance was also telling factor in the heavy-11 track conditions.

He positioned the mare fourth on the fence and cut the corner rounding the home bend to tackle the leaders. She hit the front soon after and held out the late challengers to win by three-quarters of a length.

Nine-time Group 1 winner Avantage, whose racing career was brought to a sudden halt last week after suffering a tendon injury, has been sold through the online site Gavelhouse for $4.1million.

The $210,000 Karaka Sale graduate, who won 16 of her 28 starts and $2.16million in stakemoney, was traded through the online platform rather than being sold privately with bidding closing at 7pm on Wednesday.

She was knocked down to the bid of Coolmore Stud’s Tom Magnier and is expected to head back to Australia to be mated with one of that stud’s resident sires.

By champion sire Fastnet Rock, Avantage was always going to command interest from major breeders and, with the breeding season having already commenced, a quick sale was imperative to get her breeding career underway.

Avantage was owned by the Te Akau Avantage Syndicate, a large group that included Waipukurau’s Michael Ormsby. The shareholders, depending on the size of their holding, will all get a substantial payout from the sale.

A Group 1 winner on both sides of the Tasman, Avantage boasts the largest haul of wins at the elite level of any of Fastnet Rock’s 41 individual Group 1 winners.

She is out of the Listed winning Zabeel mare Asavant, who was also Group 1 placed.

Former New Zealand-trained mare Atishu will attempt to follow the path blazed by Probabeel last year and claim the Bill Ritchie-Epsom Handicap double after taking out the first leg at Randwick last Saturday.

The former Stephen Marsh-prepared four-year-old, now in the stable of Chris Waller, showed fierce determination to get the better of Looks Like Elvis by a neck in the 1400m event after the two horses drew clear to fight out the finish.

“It’s a big help to win today because you know you’re in the field for the Epsom with a light weight,” Waller said.

“She’ll be well placed there, and the extra 200m and the tough Randwick mile will really suit, so we’re on track.”

Atishu was a dual Listed race winner when prepared by Stephen Marsh in New Zealand but last Saturday’s triumph was her first black-type victory in Australia.

Atishu is owned by a 19-member syndicate managed by Albert Bosma of Go Racing, with Dannevirke’s Dean Shuker having a five per cent share in the mare.

Top New Zealand jockey Samantha Collett has decided to make a permanent move to Queensland and is booked to fly out on October 16.

Collett rode with success across the Tasman over the winter months and thinks it is the right time for a new challenge.

“I have ticked a lot of boxes here in New Zealand,” she said.

“I have been riding for 15 or 16 seasons. I have been a premiership winner, I have had three Group 1 wins, and I’ve had close to 50 stakes winners.”

While in Brisbane during the winter Collett mainly rode for Taranaki horseman Robbie Patterson and is glad she decided to spend some time across the Tasman before fully committing to a move.

Collett admitted it will be a challenge having to start from scratch again to build her contacts in Queensland, but she is looking forward to the test will base herself at Eagle Farm for a start as it is a track that she is familiar with.