Due to the Covid-19 Alert Level 4 extension that delayed a recommencement of New Zealand racing until last Wednesday, the first day of the Bostock New Zealand Hawke’s Bay spring carnival has now been put back a week.

The second and third days of the Hawke’s Bay spring carnival will retain their original dates with the second day, featuring the Group 1 Windsor Park Plate (1600m), on October 2 and the Group 1 Livamol Classic (2040m) run on the third day, on October 16.

All regions except Auckland and Northland moved to Alert Level 3 on Wednesday, allowing racing, trials and jumpouts to take place, albeit with significant restrictions in place.

New Zealand racing sprung back to life on Wednesday with 11-race programs carded at both Matamata and Ashburton and there were race meetings on the Cambridge synthetic track on Thursday and at Hawera yesterday as the industry plays catch-up after two weeks of no racing under Alert Level 4.

Jumpouts were staged at Hastings on Wednesday while trials were held at Foxton on Thursday and Cambridge yesterday.

There are two gallop meetings set down for today, at Te Rapa and Wanganui, with the Waikato Racing Club’s meeting featuring both the Group 2 Foxbridge Plate and the Group 3 Northlands Breeders Stakes (1200m), which was transferred from the abandoned Whangarei meeting on August 21.

There will also be gallop meetings on every day in the coming week, starting with Te Aroha tomorrow, Ashburton (Monday), Taupo (Tuesday), Cambridge (Wednesday), Woodville (Thursday), Otago (Friday) and both Waikato and New Plymouth next Saturday.

There has been some frustration as to why New Zealand racing could not continue under Alert Level 4, as is the case in Australia, but New Zealand Thoroughbred Racing chief executive Bernard Saundry says he thinks New Zealanders are now starting to understand why.

“We have lobbied as hard as we can, right to the top of Government. We have been back and forth four or five times over the last eight to 12 months,” Saundry said.

“It is a very different lockdown here compared to Australia, but that doesn’t mean we stop trying to lobby Government.

“Once we get a certain level of vaccination in the community, things will start to open up. I do encourage everyone in the industry to get vaccinated because that is the quickest way to being a safer community and when we can race with some certainty.”

The date for the annual awards evening, sponsored by Bramwell Bate and VetsOne, was originally set down for next Friday, September 10. However it has now been put back to Friday, October 1, which will be on the eve of the second day of the Bostock Hawke’s Bay spring carnival.

Hawke’s Bay Racing chief executive Darin Balcombe said by postponing the function there is every chance the Hawke’s Bay region will be in a lower alert level by then and the evening can be promoted a lot better.

The awards evening will recognise the achievements of Hawke’s Bay owned, trained and bred thoroughbreds during the past racing season along with the district’s successful trainers, owners and breeders.

Unbeaten New Zealand galloper Elephant will contest today’s Group 2 $A500,000 Feehan Stakes at The Valley, in Melbourne, in preference to the open handicap over 1600m on the same card.

The Shocking five-year-old, trained by Dave and Emma-Lee Browne, has drawn the number one barrier for the 1600m weight-for-age feature in a field of 14 and will be trying to make it six wins from six starts after an impressive victory in a 1400m Benchmark 84 race at Caulfield on August 14.

With significant spring targets planned for the gelding, his connections decided to lean towards starting in the Feehan Stakes as a means of bolstering the horse’s rating in a race that features a number of stayers resuming.

“We want to see where he sits now as he needs quite a few points to get in a lot of those better races,” David Browne said.

“Sooner or later we are going to have a go against better opposition and it is probably a nice race. It is as a good distance for him and it is not necessarily the very top company but enough to give you a good line of where you’re at.”

Leading Victorian jockey Damien Lane was aboard Elephant for his last start win but, with him committed to fellow Kiwi galloper The Chosen One in the Feehan, Luke Currie has been engaged.

“He (Currie) came and gave him a gallop last week and was pretty happy with him,” Browne said.

“The horse looks really well and has come on in the coat a bit. He was a tad dull in the coat first-up but it is all starting to come through now.”

Maintaining the picket-fence form line for the lightly-tried galloper is not a concern for Browne.

“You have to keep on stepping up and eventually you’ll probably run into something better. That’s just how it is,” he said.

The son of Turn Me Loose scored his maiden win over 1200m on the Pakenham Synthetic track at just his second start, despite racing keenly throughout.

Browne said it took Bifrost a few days to settle in when he first arrived in Australia but he has improved a lot since.
“He is not as keen now that he has settled down. He was quite fresh straight off the plane but is not as keen in his work now.”

Browne hopes today’s run by Bifrost will be a guide as to whether to continue on a Guineas Prelude path with the three-year-old while another stablemate, Rhinoceros, will look to clear maiden ranks over 1600m at Sandown next week.

The Brownes also have the handy stayer Border Leicester there and he will look to get on the board in a 3000m Benchmark 78 race at Mornington next Thursday.

“The main reason we brought him over is to run in the 3000m races at The Valley to try and get him qualified for The Jericho Cup ($A300,000, 4600m on November 28) and just keep him up and running. He is probably that sort of horse,” Browne said. 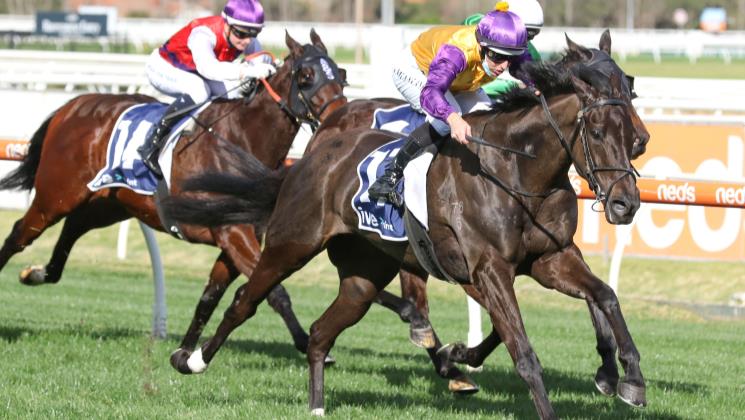 New Zealand-trained Elephant will be out to make it six wins from six starts when he takes on a field of far more experienced weight-for-age performers in today’s Group 2 Feehan Stakes (1600m) in Melbourne.

Quality New Zealand stayer The Chosen One will kick off his Cups campaign in today’s Feehan Stakes.

The Murray Baker and Andrew Forsman-trained six-year-old had a look around the Valley track on Tuesday morning under jockey Damien Lane and his trainers received positive feedback from the leading hoop.

“Damien said he was quite forward, so it’s pretty positive,” Forsman said.

The Chosen One has drawn barrier nine and will have blinkers added to his gear, with Forsman expecting a solid first-up performance from the entire.

“He always seems to go well fresh and we have decided to out the blinkers to help sharpen him up a little bit. I couldn’t be happier with him,” Forsman said.

The Chosen One is on a path towards the Group 1 Caulfield Cup (2400m) and Group 1 Melbourne Cup (3200m), races he finished third and fourth respectively last year.

The Group 1 winner arrived in Australia last Sunday with her first Australian target likely to be the Group 3 $A160,000 Bill Ritchie Handicap (1400m) at Randwick on September 18.

“She is in good shape. She had a good trip over and settled in well,” trainer Jamie Richards said.
Amarelinha had two trials in New Zealand, including a runner-up result behind stablemate Entriviere over 900m at Ellerslie.

Richards has taken it quietly with the daughter of Savabeel since then but was pleased with her progression prior to leaving for Australia and she was expected to have a trial in Sydney on Thursday.

Meanwhile, Richards has received positive reports from his father, Te Akau travelling foreman Paul Richards, about the progress of Entriviere after a minor foot injury ruled her out of the Group 3 Toy Show Quality (1100m) at Randwick on August 21.

“She seems to be in pretty good shape and Dad is happy with the way she is doing over there,” Richards said.

The mare was also due to trial on Thursday and is now expected to kick-off her campaign in the Group 2 $A200,000 Sheraco Stakes (1200m) in Sydney next Saturday, a race restricted to fillies and mares.
Richards has also welcomed the decision to delay the start of the Hawke’s Bay spring carnival by a week, with Avantage now looking to add to her nine Group 1 victories in the Tarzino Trophy (1400m) at Hastings on September 18.

“Everybody thinks that is common sense, they have approached that the right way,” he said.